CLASSICFLIX: Claude Rains Stars in The Man Who Watched Trains Go By Coming This May -- 3 Day Special Price

Claude Rains and Marta Toren star in the Technicolor noir-thriller The Man Who Watched Trains Go By (1952) coming from ClassicFlix on May 29th.

Also known as The Paris Express, this marks the debut of Trains on both Blu-ray and DVD. 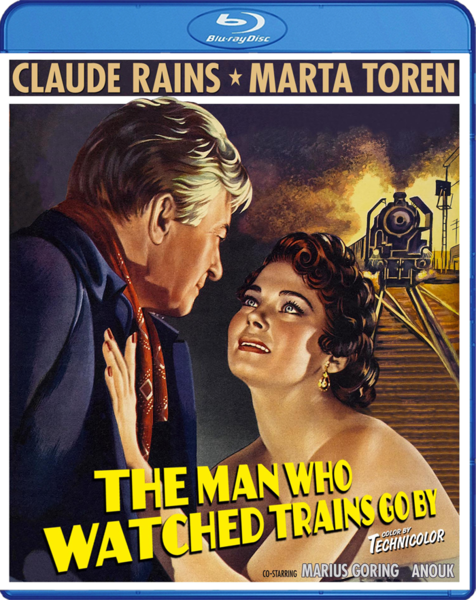 Mild-mannered bookkeeper Kees Popinga lives a mundane life and dreams about the places he can go on the trains that travel through his hometown of Groningen, Holland. But when a French police detective shows up at his firm to inspect the books, Popinga’s unremarkable existence is instantly altered, and he soon finds himself on the way to Paris with a suitcase of cash, on the run from the law and entranced by a strange and beautiful woman.

Based on the 1938 novel by Georges Simenon—the author who created fictional sleuth Jules Maigret, and whose books like The Man on the Eiffel Tower and The Brothers Rico were also adapted for the big screen—The Man Who Watched Trains Go By casts beloved Warner Bros. character actor Claude Rains (Mr. Skeffington) as the meek Popinga. The supporting cast includes Herbert Lom, Marta Toren and Anouk Aimee… with appearances by such solid British veterans as Felix Aylmer, Marius Goring, Lucie Mannheim and Ferdy Mayne.

This taut and suspenseful classic, shot in Technicolor, also benefits from beautiful location shooting in both the Netherlands and "The City of Light."