For the first time on any home video come all 21 of Hal Roach's two-reelers starring the comedy team of Thelma Todd and Patsy Kelly.

The Complete Hal Roach Thelma Todd and Patsy Kelly Comedy Collection is the inaugural release of our Silver Series line and will street on DVD this June 26th. The 3-disc set also contains as bonus features the three shorts Patsy Kelly filmed after the untilmely death of Thelma Todd.

The ClassicFlix Silver Series line will focus on bringing lesser-known titles out of studio vaults at affordable prices. Discs will be pressed (not MOD) upon release, but may become MODs after depletion of initial pressing.

About the The Complete Hal Roach Thelma Todd and Patsy Kelly Comedy Collection (see below). 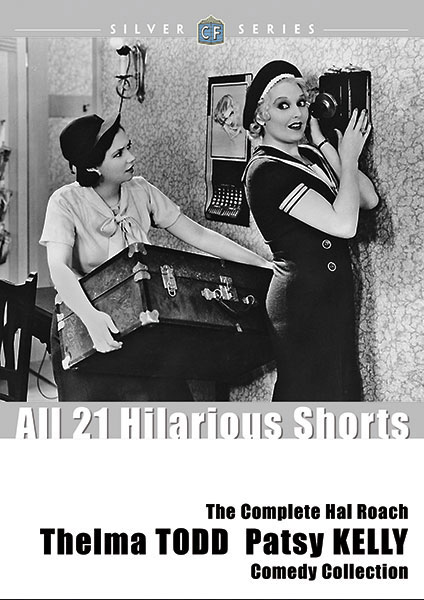 For the first time on home video comes all 21 of Hal Roach's two-reelers starring the lovely Thelma Todd and the pugnacious Patsy Kelly. These timeless shorts showcase the incredible comedic talents of an unsung duo who simply wanted to make audiences laugh... and succeeded!

In Hollywood, the laugh factory operated by Roach was known to one and all as "The Lot of Fun." Established in 1915, the studio hosted many of the familiar names in comedy at one time or another: Harold Lloyd, Charley Chase and the popular and iconic team of Laurel and Hardy. ­

Determined to find the female equivalent of "The Boys," Roach paired Thelma Todd (already under contract and a veteran of several Chase shorts) with comic actress ZaSu Pitts. Thelma and ZaSu appeared in 17 shorts between 1931 and 1933 that were very popular with moviegoers, but their fruitful partnership ended when Pitts and Roach failed to come to terms on a new contract.

After seeing comedienne Patsy Kelly in the stage production of Flying Colors, Roach agreed that she was the perfect replacement for ZaSu, and the new team of Todd-Kelly was soon putting out hilarious efforts like Babes in the Goods (1934), Maid in Hollywood (1934) and Top Flat (1935). All-American Toothache (1936) would be their final pairing as Todd's tragic death brought an end to the girls' entertaining partnership.

Though efforts were made to jump-start the franchise with Pert Kelton and Lyda Roberti, the writing was on the wall where Roach's two-reelers were concerned as the producer soon transitioned solely to "streamliners" and feature films.