Long out of print on DVD, the 1937 comedy Stand-In starring Leslie Howard and Joan Blondell (and featuring Humphrey Bogart in his first sympathetic role) comes to Blu-ray and DVD on February 26th. 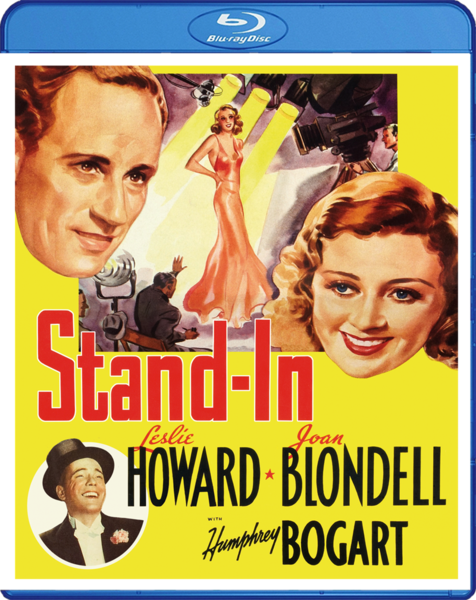 Humphrey Bogart… as a film producer cradling an ever-present Scottish Terrier? Don’t let the dog fool you as the famed tough guy also shows his flair for comedy in Stand-In (1937), a riotous, lacerating satire on the motion picture industry.

New York bank Pettypacker and Sons has a problem, a colossal problem, in the form of their investment in Colossal Studios in Hollywood. Prior to selling the failing film factory to scheming financier Ivor Nassau (C. Henry Gordon) for half its worth, the board asks their top number cruncher Atterbury Dodd (Leslie Howard) for his assessment, and he ardently recommends the bank retain ownership of the studio.

At an impasse, the firm sends Dodd out west to investigate the situation at Colossal, where he quickly enlists the help of producer Douglas Quintain (Bogart) and Lester Plum (Joan Blondell), a former child star now working in the occupation of the film’s title. Resistance to Dodd’s scrutiny, however, comes not only from Nassau, but from everyone who stands to benefit from the studio’s sale: temperamental “Russian” director Koslofski (Alan Mowbray), studio diva Thelma Cheri (Marla Shelton) and PR flack Tom Potts (Jack Carson at his obnoxious best).

Directed by Tay Garnett (The Postman Always Rings Twice) and produced by Walter Wanger (You Only Live Once), Stand-In leaves no Tinseltown target untouched while serving up a sprightly mix of slapstick, send-up and sentiment… with screwball-inspired romance for seasoning!