For the first time on home video, and with masters culled from Hal Roach Studio vaults, comes Public Defender - The Official Second Season.

With Season 1 set to street next Tuesday, ClassicFlix is proud to announce the release of the second season of the popular crime drama series Public Defender which stars Reed Hadley and features even more great guest stars like Natalie Wood, Charles Bronson, Martha Hyer, Dennis Hopper and Ted de Corsia

This 5-DVD set will be the fourth release in our Silver Series line and will street this August 13th. Synopsis below. 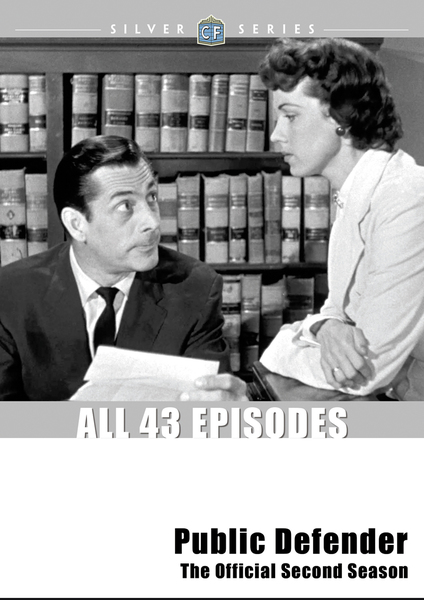 For the first time on home video come all 43 episodes of the second season of Public Defender starring Reed Hadley as Bart Matthews: a tireless and dedicated public servant who earnestly defends the rights of the indigent.

In the movies, Reed Hadley could play anything from hero (Zorro’s Fighting Legion) to villain (Calling Dr. Kildare), to prolific narrator of film noirs like He Walked by Night. On the small screen, Hadley starred in two popular early 50s TV series’: Racket Squad and Public Defender, the latter being a crime drama procedural which dramatized the taxpayer-funded practice of providing legal assistance for those unable to afford representation.

This 5-disc collection marks the first official home video release of all 43 second season episodes of this popular anthology series, every one culled from original Hal Roach Studio masters. The set also features one episode in its entirety with original commercials.