This November 12th, Michael Shayne fans can finally own something they've been trying to get for decades: all five Shayne films made at Producers Releasing Corporation (PRC).

These sought-after B-whodunnits starring Hugh Beaumont (Leave It to Beaver) as the famed fictional detective will be available this fall in The Complete PRC Michael Shayne Mystery Collection (details below). 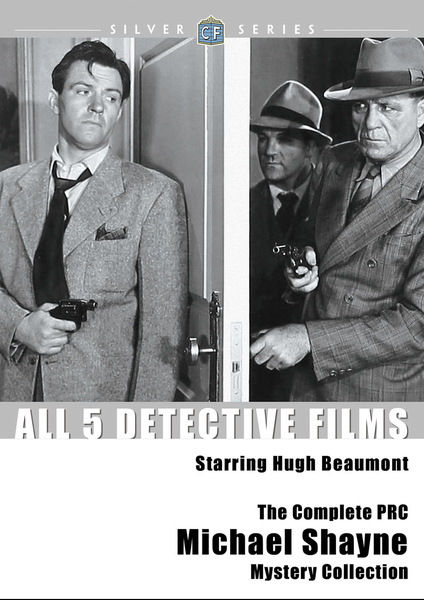 Locked away for decades, all five Michael Shayne films made at PRC Studios are making their DVD debut in this special collection from ClassicFlix!

Lloyd Nolan starred as Private Detective Michael Shayne in seven features made at 20th Century-Fox in the early 1940s. After the major studio dropped the series, Producers Releasing Corporation (PRC) brought Brett Halliday’s ace crime-solver over to “Poverty Row” in 1946 for these five fun, action-packed whodunnits starring Hugh Beaumont (Leave It to Beaver) as the famed fictional detective.

Whether you're a fan of Brett Halliday, B-mysteries, or Hugh Beaumont, The Complete PRC Michael Shayne Mystery Collection delivers the goods with over five hours of crime-solving excitement that will keep you guessing until the very end.

Murder Is My Business (1946, 64 min.)
When a former hood and acquaintance of Michael Shayne is found dead alongside a wealthy client, the private eye looks to stay one step ahead of Chief Detective Pete Rafferty who wants to implicate Shayne in the crime.

This clever mystery sets the pace well for the remainder of the series and co-stars Cheryl Walker in her first of three turns as the loyal and longing Phyllis Hamilton. Also featuring Ralph Dunn, Lyle Talbot, George Meeker and Virginia Christine.

Larceny in Her Heart (1946, 68 min.)
A desperate step-father pleas with Michael Shayne to find his missing step-daughter, and after clues start piling up, the detective goes undercover in a sanitarium in an attempt to solve the case.

Blonde for a Day (1946, 66 min.)
Michael Shayne has relocated to San Francisco, but returns to Los Angeles when he learns that reporter Tim Rourke is near death after being shot for getting too close to solving three murders tied to a gambling syndicate which uses a blonde to do its dirty work.

Kathryn Adams (real-life Mrs. Hugh Beaumont at the time) played Phyllis Hamilton for the first and only time and retired from acting after this film. Also featuring Cy Kendall (as Inspector Rafferty), Paul Bryar, Charles C. Wilson and Frank Ferguson.

Three on a Ticket (1947, 62 min.)
A man drops dead in his office, a woman asks him to bump off her husband and two mugs jump and beat him unconscious. It’s all in a day’s work for Detective Michael Shayne who tries to piece together the mystery of what makes a baggage check ticket so valuable that it’s worth committing murder.

Cheryl Walker and Ralph Dunn are back in their respective roles of “Phil” and Inspector Rafferty while Paul Bryar takes his third and final turn as Tim Rourke. Also featuring Louise Currie, Douglas Fowley and Gavin Gordon.

Too Many Winners (1947, 60 min.)
When too many winning tickets are claimed at Santa Rosita Race Track, everybody’s target is Michael Shayne: the curvaceous tipster who won’t take no for an answer, the shady operator who offers him dough to lay off and the criminal mastermind whose thugs tangle with the sly detective at every turn.

Special thanks to licensor Films Around the World for this release.