Star-packed screwball comedy Out of the Blue (1947) will be making its debut on home video this November 26th from ClassicFlix.

Newly remastered and restored, the riotous farce stars George Brent, Virginia Mayo, Turhan Bey, Ann Dvorak and Carole Landis and was written and co-scripted by author Vera Caspary, whose works such as Laura were so popular at the time that production studio Eagle-Lion put her name above the title for the film's opening credits. 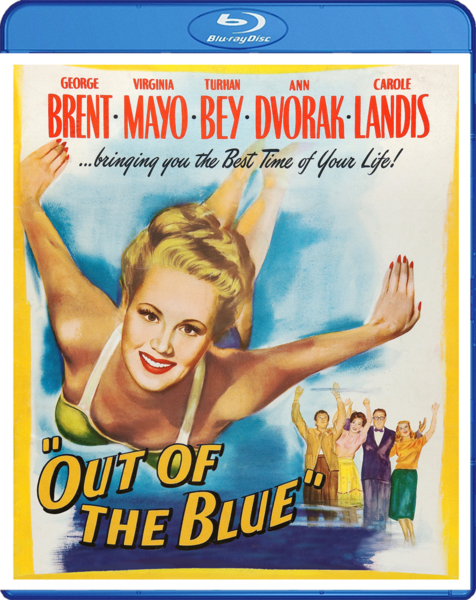 If when the cat’s away the mice will play... then henpecked husband Arthur Earthleigh is due for a real rave-up of a weekend when his domineering wife Mae (Carole Landis) goes out of town to visit her sister.

After dropping off his wife at Grand Central Station, Arthur (George Brent) plans to dine alone at a local restaurant, but unexpectedly meets up with tipsy flibbertigibbet Olive Jensen (Ann Dvorak) and later invites her back to his place for a nightcap. It’s all perfectly innocent, of course, but Olive has a tendency to ignore any sign that she’s worn out her welcome. And although she seems to have an iron constitution, Olive soon confesses that she’s subject to fainting spells — a fact Arthur ignores as he later believes he’s killed her when she succumbs to one of her “episodes.”

To avoid scandal, Arthur moves the unconscious Olive to the terrace of his neighbor David Galleo (Turhan Bey) and is doubly pleased in doing so because he’s been trying to evict the bohemian artist and his vexing dog Rabelais. But David and girlfriend Deborah (Virginia Mayo) are on to his scheme and think up their own plot to ensure that Arthur won’t be pushing for dispossession any time soon.

A delightful comedy that echoes the classic screwball farces of the 1930s, Out of the Blue features Carole Landis in one of her final roles (also playing against type as the disapproving Mae) before her tragic passing in 1948, and both Turhan Bey and Virginia Mayo who make an attractive couple as they’re swept up in the insanity. But it’s Ann Dvorak who steals the show as the delightful Olive… the infuriatingly funny and unstoppable force who turns poor Arthur’s world upside down.

Author Vera Caspary, whose works were adapted for such classic films as Laura and A Letter to Three Wives, wrote the story and co-scripted Out of the Blue which was directed by screwball comedy veteran Leigh Jason.

Special thanks to licensor Films Around the World for this release.