ClassicFlix is pleased to announce Volume 1 of our Complete Hal Roach Streamliners Collection: The Tracy and Sawyer Military Comedies.

Due to street on March 31st, 2020, this set marks the first official home video release of all six delightful military comedies, with their final film, Cinecolor produced Here Comes Trouble (1948) - specifically remastered in color from a 35mm print for this set (details below). 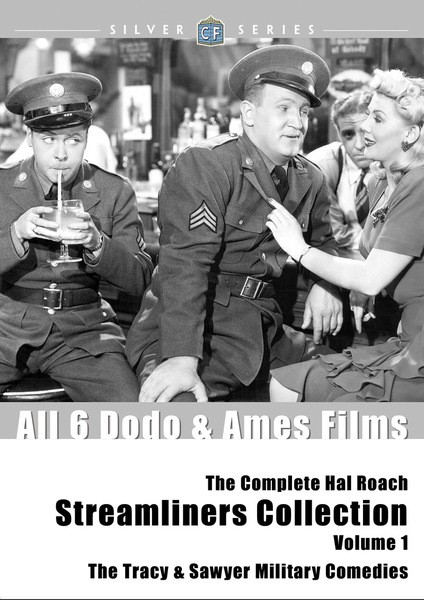 For the first time on DVD come all six Tracy and Sawyer streamliners produced by Hal Roach in this special collection from ClassicFlix!

When you hear the word "streamliner," you might picture those high-speed passenger trains from the 1930s to the 1950s. For pioneering movie producer Hal Roach, however, “streamliner” had an entirely different meaning.

The man whose film studio was known as the “Lot of Fun” saw a changing landscape in the picture business in the late 1930s and came up with the idea of producing features with shorter run times to accommodate movie houses, as well as cut production costs. The concept would prove successful with 22 streamliners being produced by the studio between 1941 and 1948.

Hal Roach premiered his first streamliner in September of 1941: Tanks a Million, a military comedy that teamed William Tracy and Joe Sawyer as catastrophe-prone dogfaces. The popular duo would star in five more service romps for Roach, Hay Foot (1942), About Face (1942), Fall In (1943), Yanks Ahoy (1943) and the Cinecolor produced Here Comes Trouble (1948) -- which was remastered in color from a 35mm print exclusively for this set.

Tanks a Million (1941, 50 min.)
When Dorian “Dodo” Doubleday gets drafted into the Army, his photographic memory quickly gets him promoted to sergeant, much to the dismay of all those around him, especially Sergeant Ames.

This delightful first entry of the series co-stars James Gleason and Noah Beery, Jr., and features many other familiar faces including Douglas Fowley, Elyse Knox, Frank Faylen and Dick Wessel.

Hay Foot (1942, 47 min.)
The hilarity continues at Camp Carver as Colonel Barkley mistakes Dodo as an expert marksman, and plans to teach braggarts Ames and Cobb a lesson via his newfound “best shot in the Army”.

The team of Tracy and Sawyer is solidified in this second installment of the series as both actors receive top billing. Featured players include James Gleason returning as Col. Barkley, Noah Beery, Jr. (now Sgt. Cobb), Elyse Knox, who is now Betty Barkley (the colonel's daughter) and Douglas Fowley.

About Face (1942, 44 min.)
Wanting to paint the town, a broke Sergeant Ames suddenly becomes Doubleday’s pal when he learns that Dodo has just won a wad of cash in a radio contest.

Fall In (1943, 48 min.)
Dodo is up for a promotion and Ames is out to prove that he’s the better man, but they soon join forces as a spy ring is discovered right under their noses.

Jean Porter is back, but now love interest Joan, while Frank Faylen plays his third different role in the series, this time as Captain Gillis (a last name he would later don in the popular TV series The Many Loves of Dobie Gillis). Also featured are Rebel Randall, Arthur Hunnicutt and Tom Fadden.

Yanks Ahoy (1943, 59 min.)
Called to special duty overseas, Dodo and Ames board a naval vessel and soon learn of a saboteur’s plot to blow up the ship.