Scanned in 4K and beautifully restored from original 35mm nitrate film elements, Abbott and Costello's jungle romp Africa Screams (1949) will be released in a special limited edition on April 28th.

This release will be limited only to its initial pressing (up to 3,000 for Blu-ray & 1,000 for DVD) and no more units will be replicated once they are sold. A wide release to all major retail outlets may occur at a later date depending on initial units sold.

Synopsis, bonus features and more about the release below. 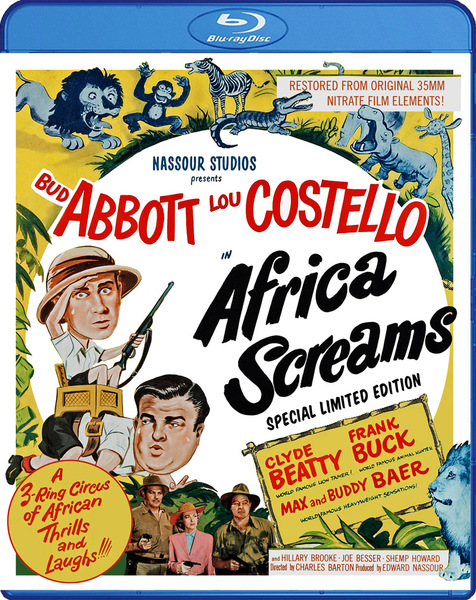 Newly restored from original 35mm nitrate film elements and looking better than ever in this special limited edition!

During the 1940s, the comedy team of Bud Abbott and Lou Costello were among Universal's top moneymakers, and, by the end of the decade, were allowed to make one independent film per year. Hot off the success of Abbott and Costello Meet Frankenstein, Bud and Lou teamed up with independent producer Edward Nassour to release Africa Screams—a hilarious jungle romp where the boys hightail it to the dark continent and encounter wild beasts, dangerous natives, and… an affectionate gorilla!

Department store clerks Buzz Johnson and Stanley Livington (Bud and Lou) are hired by treasure hunter Diana Emerson (Hillary Brooke, The Abbott and Costello Show) for an African expedition when it is believed Stanley has memorized a map that will lead her to a rare orangutan. It's all a cover, of course, as Diana is really after a secret trove of diamonds and is counting on Stanley’s memory guide her to the treasure.

The transfer and restoration of this release has been supervised by Bob Furmanek of 3-D Film Archive who successfully located and sought the preservation of Africa Screams’ nitrate film elements in 1986; who earlier this month successfully completed a crowdfund campaign for Africa in which over 600 supporters participated.

Five reels of the film’s original camera negative have been combined with remaining fine grain film elements to present this classic Abbott and Costello comedy in high definition to be seen as never before. Bob has also carefully curated and assembled the bonus features made available for this release.