The ClassicFlix reach into the Hal Roach Studio vaults continues as The Complete Hal Roach Streamliners Collection, Volume 4 (The Musicals) will arrive on DVD this August 25th. 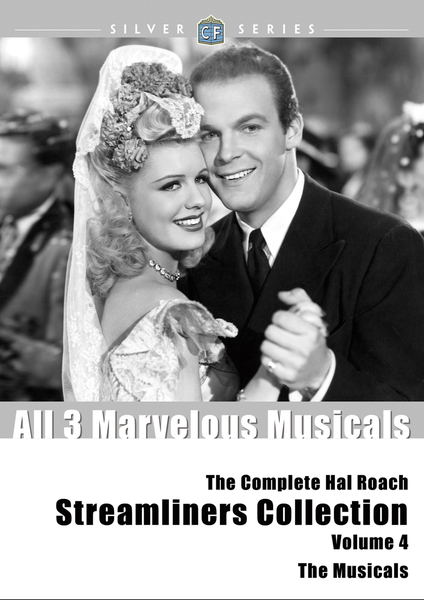 For the first time on home video come all three Hal Roach streamliner musicals in one set—with each film culled from original studio masters!

The 1940 Laurel & Hardy comedy A Chump at Oxford was intended to be an experiment for Hal Roach—the man whose studio in Tinseltown was known as the “Lot of Fun” wanted to produce a series of features whose running time would be clocked between an extended two-reeler and a “B” programmer. His idea was eventually abandoned for Oxford, but a year later, Roach’s concept to accommodate movie houses which were not set up to show double features was born.

Labeled “streamliners”, two of the first on the production schedule in 1941 were a pair of musicals, All-American Co-Ed and the Technicolor Fiesta, both produced and directed by LeRoy Prinz. The third musical would be released in 1942, Flying with Music, featuring direction by George Archinbaud. Light and frothy, the movies featured the professional sheen long associated with the Roach studio, and two of the films—Co-Ed and Music—even received Academy Award nominations for Best Song and Best Scoring for a Musical Picture!

All-American Co-ed (1941, 49 min.)
With their enrollment on the decline, girls college Mar Brynn needs notoriety to promote their school. Their target: the boys in Quinceton College’s Zeta fraternity who are publicly tarnished as “least likely to succeed”. Out for revenge, Zeta plans to embarrass Mar Brynn by having one of their boys pose as a girl.

Starring songtress Frances Langford and former silent Our Gang regular Johnny Downs, All-American Co-Ed was nominated for Best Original Song (Out of the Silence) and Best Scoring of a Musical at the 1942 Academy Awards.

Fiesta (1941, 44 min.)
Jose plans on marrying childhood sweetheart Cholita upon her return from Mexico City, but his hopes are dashed when she returns accompanied by her new beau.

Filmed in Technicolor, this vibrant and energetic musical stars Ann Ayars, Jorge Negrete, Armida, George Givot and Antonio Moreno. One of only two films directed by choreographer LeRoy Prinz (Yankee Doodle Dandy) - the other being All-American Coed, which was released only a month earlier. Prinz also produced both films.

Flying with Music (1942, 46 min.)
A rich, young socialite plans a trip to the Caribbean in order to meet a handsome, young singer whom she heard on the radio, but has never met.

Jam-packed with catchy numbers and dance routines, Flying With Music stars Marjorie Woodworth, George Givot, William Marshal and Edward Gargan, and was nominated for Best Original Song (Pennies for Peppino) and Best Scoring of a Musical at the 1943 Academy Awards (both for Edward Ward, Phantom of the Opera, 1943).