Hal Roach produced 22 streamliners in all between 1941 and 1948, of which many previously were rarely or ever seen -- and none which had releases produced with masters culled from Roach studio vaults. This final volume, which contains Curley (1947) and Who Killed Doc Robbin? (1948), marks the completion of our goal to make all 22 films available on home video.

This also marks the 11th release in our Silver Series line which will be adding several more titles before the year's out. 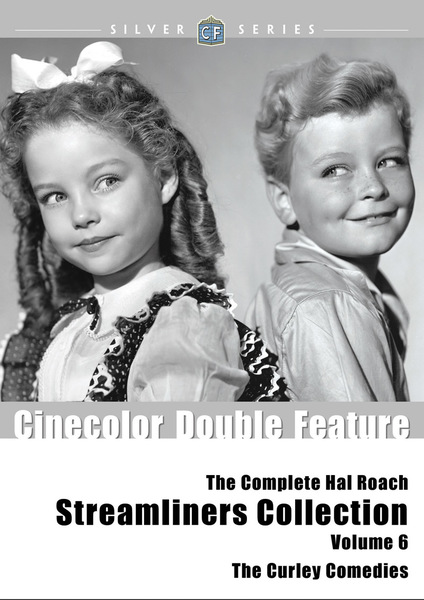 Newly scanned from original 35mm film elements, ClassicFlix presents the sixth and final volume of Hal Roach’s streamliners with a Cinecolor double feature of the producer’s reboot of the “Our Gang" franchise.

When motion picture comedy producer Hal Roach returned to his innovative “streamliner” format in the late 1940s, he decided to revive “Our Gang” with a brand-new group of “rascals.” The result was Curley (1947), a slightly expanded telling of the classic Our Gang short Teacher's Pet (1930), which mined laughs from the bygone days of puppy love and schoolboy crushes.

The following year saw Roach's new gang return in Who Killed Doc Robbin? (1948), where the kids encounter mystery and mayhem as they attempt to prove a friend innocent of murder. Although both streamliners were ambitiously filmed in Cinecolor, Roach abandoned his concept after Robbin, turning his attention to the new medium of television.

Curley (1947, 53 min.)
In a case of mistaken identity, Curley and his pals make things unpleasant for their new school teacher.

Who Killed Doc Robbin? (1948, 50 min.)
When Dr. Robbin’s lab is blown up, the gang goes about finding clues to the crime in a creepy haunted house filled with secret passages, booby traps and a frightful gorilla.

Larry Olsen returns as Curley in this comic mystery and is aided again by the return of the entire gang. George Zucco, Virginia Grey, Don Castle, Whitford Kane and Paul Hurst are also featured.