Newly remastered and restored, the legendary Orson Welles puts on a hypnotically captivating performance in Black Magic (1949) which is scheduled for its Blu-ray debut on October 26th.

An adaptation of the Alexandre Dumas novel Joseph Balsamo, the costume drama was filmed in Italy and co-stars Nancy Guild.

More details on the film below. 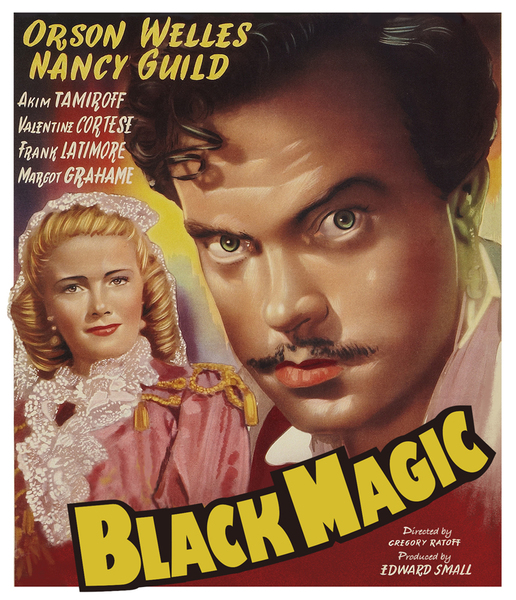 After watching his gypsy parents executed by hanging for the alleged crime of sorcery, a young Joseph Balsamo is tortured mercilessly for the insolence of objecting to his parents’ conviction. After a narrow escape from his captors, he vows revenge on the nobleman who sentenced his parents to death.

Having honed his skills as a charmer through his teen years and into adulthood, Joseph (Orson Welles) now dons the name Cagliostro and becomes a famous sorcerer throughout Europe earning wealth, fame and privilege. His misadventures culminate in a bit of palace intrigue with a plot against Queen Marie Antoinette (Nancy Guild)—whose exact double is under Cagliostro’s spell and is helpless to be his instrument in usurping the throne of France.

Despite having helmed such cinematic triumphs as Citizen Kane and The Magnificent Ambersons, the legendary Orson Welles often had trouble in acquiring directorial assignments throughout his career. Many of Welles’ film projects were independent ones—financed by acting he did in other directors’ pictures. The 1949 production of Black Magic is just such an assignment as Welles used the proceeds to make his version of Shakespeare’s Othello (1951).

An adaptation of the Alexandre Dumas novel Joseph Balsamo which tells the story of the 18th century sorcerer Cagliostro, Magic is directed by Gregory Ratoff and features a bravura performance of villainy from Welles, with excellent support from Guild, Stephen Bekassy and Akim Tamiroff (who would later appear with Welles in the director’s classic Touch of Evil).