British Thrillers and Horror This February

Mystery and horror are on tap this February 28th as ClassicFlix will be adding three British titles to our catalog.

The 1951 suspense thriller Obsessed starring David Farrar (Black Narcissus) and Geraldine Fitzgerald (So Evil My Love) will be making its home video debut on Blu-ray and DVD. Released in the U.K. as The Late Edwina Black, Obsessed boasts a beautiful 4K restoration and features Roland Culver and Jean Cadell.

Two Silver Series titles, also being released on Blu-ray and DVD, will street the same day—including our first horror film.

Silver Series #22
From a novel by Edgar Wallace comes The Human Monster (1939) starring horror icon Bela Lugosi (Dracula). The first British film to receive an "H" (for "Horrific") from the British Board of Film Censors, Monster was released in the U.K. as The Dark Eyes of London and features Hugh Williams and Greta Gynt.

Silver Series #23
The moody chiller The Night Has Eyes will also be making its Blu-ray and DVD debut and stars a young, and soon-to-be-screen legend, James Mason (Odd Man Out). Also known as Terror House and Moonlight Madness, Night features the haunting cinematography of Gunther Krampf (The Hands of Orlac, Pandora’s Box and uncredited on Nosferatu) and a strong supporting cast. 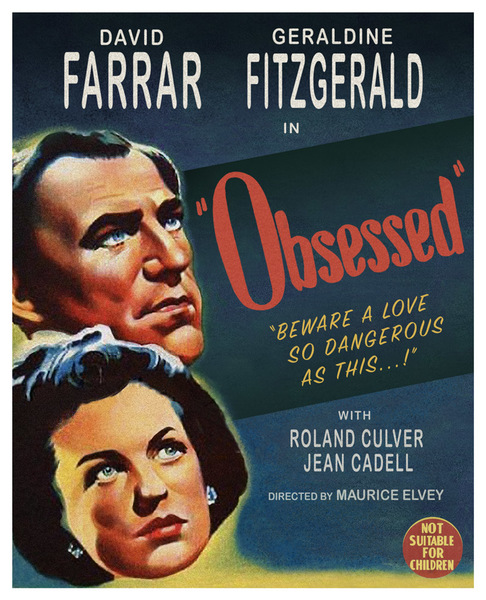 Bedridden and ailing for several years, it was no surprise when death came to wealthy dowager Edwina Black. The late Mrs. Black, however, will not be mourned by most of the community in the small English village where she resided—certainly not by her henpecked husband Gregory (Farrar), the town's schoolmaster, nor her female companion Elizabeth (Fitzgerald), both of whom are relieved at finally being free to express their love after conducting a not-so-secret affair for some time.

But when the town doctor (Harcourt Williams) conducts a post-mortem, death by natural causes is ruled out as he found large traces of arsenic in Edwina's remains. Inspector Martin of Scotland Yard (Roland Culver) suspects that the couple engaged in a bit of foul play and patiently plays a game of cat-and-mouse in hopes of implicating them in the crime. Ellen (Jean Cadell), Edwina's fiercely loyal housekeeper, also figures in and makes no secret of her contempt for the two lovers and their likely roles in the death of her mistress.

Based on the 1949 stage play The Late Edwina Black (and released in 1951 in the U.K. under the same name), Obsessed is directed by Maurice Elvey (The Clairvoyant) and features several twists and turns in its narrative while granting character veteran Culver a particularly droll turn as the determined Scotland Yard inspector.

The dedicated detectives of Scotland Yard are investigating a series of deaths involving victims found drowned in the Thames. The link in these baffling murders is that they were all indemnified through Dr. Feodor Orloff (horror icon Bela Lugosi), an insurance agent who's designated The Dearborn Home for the Blind as their beneficiary. Could there be a deeper connection between the sinister Orloff and John Dearborn, the kindly minister in charge of the home?

Detective Inspector Larry Holt (Hugh Williams) is convinced there is and his investigation becomes personal when the daughter of one of the victims, Diana Stuart (Greta Gynt), is recommended by Orloff for secretarial work at the Dearborn home. The inspector quickly develops an attraction for Diana, but she soon learns too much and will suffer the same fate as her father if Holt doesn’t act quickly to solve the case.

Shot in a speedy eleven days, The Human Monster (A.K.A. The Dark Eyes of London) was based on a 1924 novel by prolific mystery author Edgar Wallace (the co-creator of King Kong) and provided Lugosi with a rare opportunity to appear in a motion picture produced abroad. Monster was also the first British film to receive an "H" certificate (for "Horrific") from the British Board of Censors meaning that children under the age of 16 were not permitted to see the motion picture.

Utilizing moody lighting and atmospheric sets, The Human Monster stands out as one of Lugosi's more memorable post-Dracula showcases and he's aided immeasurably by a fine supporting cast and skillful direction from Walter Summers (The Return of Bulldog Drummond), who also contributed to the script along with Patrick Kirwan, Jan Van Lusil and producer John Argyle.

Screen legend James Mason stars in the classic British chiller The Night Has Eyes (1942) debuting on Blu-ray from ClassicFlix.

When the Carne House Secondary School for Girls closes for the holidays, schoolteacher Marian (Joyce Howard) and her colleague Doris (Tucker McGuire) decide to vacation on the Yorkshire moors—the same area where Marian's friend Evelyn mysteriously vanished a year earlier.

While taking a shortcut on foot to their destination, a violent storm kicks up and the two women are forced to seek shelter in the home of composer-pianist Stephen Deremid (Mason), a recluse suffering from the shell shock he experienced fighting in the Spanish Civil War. Marian soon develops an attraction towards Stephen...but she also starts to suspect that he might have had something to do with Evelyn's disappearance.

Adapted from the 1939 novel by Alan Kennington, The Night Has Eyes (A.K.A. Terror House and Moonlight Madness) showcases one of the earliest screen performances from James Mason (Odd Man Out, Bigger Than Life) who shines in his brooding portrayal as the enigmatic murder suspect, and is matched by British femme fatale Joyce Howard’s performance as the heroine determined to solve the mystery of her missing friend.

Skillfully written and directed by Leslie Arliss, Eyes is a spookily atmospheric thriller that benefits greatly from the haunting cinematography by Gunther Krampf (The Hands of Orlac, Pandora’s Box), who painstakingly worked for hours getting the right density on the artificial fog effects. Character greats Wilfrid Lawson and Mary Clare are particular standouts in a superb supporting cast.