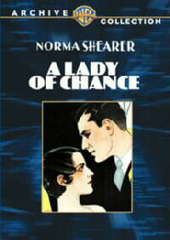 Where's That Been? - A Lady of Chance

Dolly Morgan (Norma Shearer) works as a switchboard operator at a very fashionable NYC hotel, and from her vantage point is able to scope out wealthy gentlemen that will serve as unwilling volunteers for her to 'trim,' in the parlance of the confidence man. For Dolly is better known by her alias--'Angel Face'--she's able to use her beatific countenance to fleece suckers, and she has done so many times in the past. The problem is she's currently out on parole and in violation of the same--spotted by a pair of her former confederates, Bradley (Lowell Sherman) and Gwen (Gwen Lee), Dolly is forced into participating in a 'racket' to relieve a rich pigeon the weight of his wallet.

The con goes as planned but Dolly turns the tables on her partners-in-crime by making off with the money (it's only fair--they planned to steal it from her first), and soon she's back at another hotel, this time for a tile and cement convention. A glance at a telegram being sent by Steve Crandall (Johnny Mack Brown) to his grey-haired old mother (Eugenie Besserer) indicates that he's about to put over a big business deal, so Dolly makes fast friends with Steve. Steve gets pretty serious where 'Angel Face' is concerned: he proposes to her, and a clearly surprised Dolly says yes. 'I might as well get used to it,' reads a title card as Steve announces his intention to take care of her hotel bill, 'from now on I do the paying.' 'And how!' is Dolly's response.

Meanwhile, Brad and Gwen turn up like the proverbial bad pennies at the hotel and insist on being dealt in on Dolly's scheme. Dolly is able to elude her fellow chiselers as she journeys to Winthrop, Alabama with her new husband. Steve's description of the old Crandall homestead has been a tad exaggerated, and while Dolly is ready to head back to the Big Apple she has a change of heart because she's really fallen in love with Steve. All she has to do is keep Brad and Gwen from taking her beloved for a hundred thousand dollars--the amount offered to him by a corporation for his revolutionary process of making cement.

A Lady of Chance (1928) was actress Norma Shearer's fare-thee-well to silent pictures. The movie was released at a time when the 'talkies' were just coming into vogue, and in fact Chance would premiere in theatres with a few sound sequences added in post-production despite MGM's reluctance to completely abandon silent films. These sound sequences did not, however, feature Shearer; Norma waited until the studio released its first 'all-talkie,' The Trial of Mary Dugan (1929), to allow moviegoers to hear her voice. (The Warner Archive MOD release of Chance does not feature the talking sequences, by the way.)

You're probably not going to want to hear this, but I've never really cottoned to Norma Shearer. I cannot argue that Norma wasn't talented--still, 'the Queen of MGM' was always a bit too mannered in her performances for my tastes; I prefer her Barbara Stanwyck-like roles in movies such as The Divorcee (1930) and A Free Soul (1931) as opposed to her costume pics like Romeo and Juliet (1936) and Marie Antoinette (1938). So I've always found it odd that in the Shearer movies I do like, it's her silent work that impresses me so much. Norma was not only a beauty, she was a performer who made excellent use of facial expressions and hand gestures, and she does so to great effect in A Lady of Chance. I'd even go as far to say that it's probably my favorite of her silents I've seen so far, and we're talking a list that includes He Who Gets Slapped (1924), Lady of the Night (1925) and The Student Prince in Old Heidelberg (1927).

I'm fascinated by Shearer's portrayal of Dolly in Chance. On the surface, there's no question that 'Angel Face' is a simple gold-digger out to take men for whatever monetary rewards she can get. And yet there are a number of instances in the movie (particularly after she's been proposed to by Steve) where that facade of cynicism fades away and we see a seam of vulnerability that Dolly works overtime to hide. Nowhere is this more evident than when Dolly confides in Steve that she thought she was marrying a much richer man (his mother shows him his cement company--housed in a ramshackle barn--and Dolly remarks: 'Looks just like Pittsburgh!') and that there's no other recourse of action for her to follow but to return to New York on the evening train. The next morning, Steve is eventually going to have to tell his mother and younger brother (Buddy Messinger) that Dolly has taken a powder, and as he goes upstairs to his bedroom, he finds Dolly asleep in a chair in a corner. Her heart has melted down to whatever gold is selling for by the ounce, as she tells him she truly loves him.

Norma Shearer's co-star in Chance was former University of Alabama gridiron legend Johnny Mack Brown, whose silent motion picture career flourished in such features as Our Dancing Daughters (1928) and The Single Standard (1929). But when the sound era came in to play the second half, Mack Brown's molasses drawl was all too evident in movies like Female (1933) and Belle of the Nineties (1934), and he was forced into another line of movie work: as a B-Western cowboy star. Johnny was immensely popular with the Saturday matinee crowd, and those who worked with him on those programmers have attested that he was the walking definition of a Southern gentleman.

Chance also features fine work from actor-director Lowell Sherman as the scoundrel Brad, who made a name for himself both onstage and in such silent films as Monsieur Beaucaire (1924) and The Garden of Eden (1928) playing sophisticated cads with refreshingly self-deprecating senses of humor. Sherman continued his first-rate work in the sound era with appearances in Ladies of Leisure (1930) and What Price Hollywood? (1932), and started to gravitate toward working behind the camera by directing the likes of She Done Him Wrong (1933) and Born to Be Bad (1934). His last project before his untimely death from pneumonia in 1934 was the first film to be shot in the three-strip Technicolor process, Becky Sharp (1935--Rouben Mamoulian took over and completed the project).

It's Robert Z. Leonard in the director's chair on A Lady of Chance; he handles the material--adapted by future director Edmund Goulding and A.P. Younger from Leroy Scott's tale 'Little Angel'--with a noticeably light and winsome touch (I like how he has Gwen recognize 'Angel Face' by transforming Dolly into a tarted-up trollop while seated at her switchboard before resuming Dolly's regular features), and it moves along at a brisk 78-minute clip. Classic film fans will recognize character veterans Bert Roach (as the portly guy who propositions Dolly at the beginning of the film) and Polly Moran (as a hotel maid) while enjoying Norma Shearer at her unpretentious best.