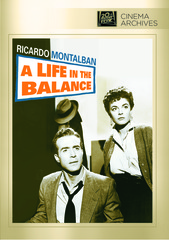 Where's That Been? - A Life in the Balance

Let's get this out in the open: itinerant musician-widower Antonio Gomez (Ricardo Montalban) isn't going to be nominated for 'Father of the Year' honors any time soon. Antonio isn't a bad father to his ten-year-old son Francisco (known to one and all as 'Paco') -- he certainly doesn't mentally or physically abuse the child -- but he's undeniably an irresponsible one. His quick temper has resulted in the loss of his most recent job (just another in a long line of many), and Antonio has been carrying on the charade of 'going to work' so as not to disappoint Paco...plus to keep his landlords Andres and Carmen Martinez (Jose Torvay, Fanny Schiller) at bay, who have not been shy about their intention to adopt Paco and provide for him a more stable home.

One night, as Antonio heads off to his 'job,' he promises Paco -- who shares his father's love of music -- that he will bring him home a guitar he plans to purchase at a neighborhood pawn shop. To raise the necessary scratch, Antonio pays his former girlfriend a visit. Carla Arlota (Eva Calvo), a dancer who resides in the same building as Big and Little Gomez, owes Antonio money and though she is reluctant to repay the loan of 500 pesos (she's not received the bulletin that their relationship is kaput) she eventually breaks down and forks over the money. Antonio has no sooner left Carla's apartment when the young lovely is dispatched by an unknown assailant (Lee Marvin) whose serial killer activities -- he's responsible for knifing half-a-dozen women -- have attracted the attention of the authorities.

Unfortunately for Antonio, he was spotted leaving Carla's digs by Mrs. Martinez...who's only too eager to impart this to Lt. Fernando (Rodolfo Acosta) and Captain Saldana (Carlos Muzquiz), the two detectives investigating Carla's death and the demise of the other women. A dragnet is quickly set up to capture Antonio, who is spending time in the company a young woman, Maria Ibinia (Anne Bancroft), whom he met at the pawnshop where he purchased his son's gift. Antonio and Maria, oblivious to Antonio's status as a person of interest in the stabbing deaths, spend their free time seeing the sights at a festive carnival while waiting for Paco to show up (Antonio has promised the two of them will watch the fireworks display together).

Paco, to his credit, is a bit occupied. He witnessed Carla's murderer leaving her apartment and has stuck to him like Wrigley's on the bottom of a shoe. The killer gradually pieces together that Paco was the kid he spotted at the scene, and he puts the snatch on him to keep him from telling what he knows. Hauled in by the police, Antonio and Maria learn what has happened to Paco...and with the help of the police, attempt to locate him and his kidnapper before the psychopath notches up another knife murder.

If there's any reason to sit down with A Life in the Balance (1955) -- a potboiler directed by Harry Horner (with an assist from Rafael Portillo) and scripted by Robert Presnell, Jr. and Leo Townsend (from a story by Georges Simenon) -- it's for future Academy Award-winner Lee Marvin's mesmerizingly sleazy turn as the knife-wielding villain, identified in the credits as 'The Killer.' Marvin grabs what could have been a thankless part (he doesn't even receive a proper name, for Pete's sake) and is off to the races, presenting the murderer as both lonely misogynist and an out-of-control psychopath whose disturbing attachment to the young boy suggests there's a little pederasty on his rap sheet as well.

The script for Balance is embarrassingly thin; much of its plot hinges on coincidence (the method by which Antonio and the cops locate Paco's whereabouts will induce much eye-rolling...though they did borrow a clever gag from Harold Lloyd's Professor Beware, in which Paco keeps putting police call boxes out of commission with his trusty slingshot) and with the exception of Marvin's killer, the characters are cardboard, one-dimensional types despite the presence of pros like Montalban and Bancroft. (Bancroft, who would also take home an Oscar later during her lengthy career, is quite alluring as Maria, even though the way she's introduced sort of telegraphs that there's going to be a happy ending at the conclusion of all this.)

The film does feature some interesting nighttime cinematography, with the Mexico City location shooting being most effective, conveying a background of sweat-inducing suspense and menace that mixes elements of hardscrabble poverty, mental illness and desperation. The carnival scenes, suggesting a world that's spiraling out of control, are well-shot and involving. The contrast between Montalban's and Marvin's characters -- one a wastrel who's nevertheless devoted to his son; the other an anti-social misfit who seems to long for a meaningful relationship of his own -- also generates a little interest despite the unshakable suspicion that it's all a contrivance to demonstrate how Montalban will change his irresponsible ways as the end credits roll.

A Life in the Balance was the offspring of Panoramic Productions, a production arm of 20th Century Fox that specialized in cheaply made movies like The Raid (1954; with Bancroft and Marvin) and childhood 3-D favorite Gorilla at Large (1954; Bancroft without Marvin). Balance is short and sweet at a running time of 74 minutes, with a pulling-out-all-the-stops performance by Lee Marvin that’s guaranteed to please and entertain his admirers.