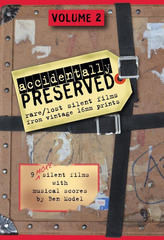 Where's That Been? - Accidentally Preserved, Vol. 2

If you've read enough Where's That Been? columns by now, you're well aware that the movies discussed here are those that weren't necessarily trumpeted with a great deal of fanfare but are features that are often referred to as 'sleepers'; movies that have disappeared under a classic movie fan's radar or are underappreciated films well worth seeking out. So for a change of pace, I decided this time to concentrate on a collection that features treasures that fall under a literal interpretation of 'Where's that been?'

Classic movie buffs are also well aware that in the days before Blu-ray, DVD or even VHS that films didn't necessarily have a long shelf life - they were produced for the purpose of entertaining audiences for a short period of time, and then whisked away to make room for another special feature. A few movie studios - notably MGM and Walt Disney - took steps to preserve their previous releases for whatever reasons (mostly financial; Disney certainly reaped the benefits of re-releasing its classic animated movies to subsequent generations) but by and large, much of cinema's rich history literally turned to dust. Film historian and archivist David Pierce, in a study published in September of 2013, estimates that only 25% of American silent feature films survive today in complete form.

Without the diligence of motion picture studios to maintain and take care of their output, much of what constitutes modern day film preservation fell upon those cinephiles who enjoyed movies so much that they added their favorites to their own personal collections...something which the studios did actively participate in, often releasing edited and cut-down versions of features and shorts for the home-use and rental markets. Many of these treasures managed to survive the ravages of time and neglect since they were printed on what is known as 'safety film' - you may be familiar that many early shorts and features were released on unstable nitrate film, thus prompting a declaration in the film preservation community that 'nitrate won't wait' - and in the modern home video era, these films often end up being hawked on sites like eBay. That's where Ben Model enters the picture.

Model, a silent film accompanist and historian, amassed a large collection of these 16mm cinematic oddities over the years and believed that rather than let them continue to collect dust in storage cans there just might be an audience for these treasures on DVD. He instituted a Kickstarter project to raise ,600 for the production of a DVD that would showcase these rarities - which, in many instances, constituted the only extant versions of these films. The response was so positive that Accidentally Preserved, a collection of vintage comedies, cartoons and other odds-and-ends, was released as a manufactured-on-demand DVD in June of 2013. Both the subsequent sales of this disc and leftover proceeds from the earlier Kickstarter campaign generated enough revenue for a 'sequel' in January of 2014 - Accidentally Preserved: Volume 2.

Like the preceding collection, the contents of Accidentally Preserved: Volume 2 concentrates heavily on films from now-forgotten comedians of the past; Ben's expertise (in collaboration with author-historian Steve Massa) is in silent comedy, and funsters such as Neely Edwards, Henry Murdock and Bobby Vernon are allowed the opportunity to attract the attention of a new generation of fans (both Edwards' The Little Pest [1927] and Murdock's Cook, Papa, Cook [1927] are the only known surviving prints of these silent treasures). There are also oddities in the form of an animated cartoon, 1919's Charley on the Farm (the work of director Otto Messmer and producer Pat Sullivan that presents The Little Tramp in animated form) and a Kodascope 'cutdown' of a 1929 Malcolm Sebastian 'Big Boy' comedy (also considered lost), Helter Skelter. In addition, two curios are present in the collection: a 1925 public service announcement (animated by Dick Huemer) for Christmas Seals and a 1928 cautionary tale entitled How Jimmy Won the Game, which preaches of the dangers of mixing America's pastime with blasting caps.

The real finds on Volume 2 start with a 1924 'Telephone Girls' comedy, Sherlock's Home - featuring the talents of the underrated comedienne Alberta Vaughn. The 'Telephone Girls' shorts were a series of two-reel comedies released by FBO (Film Booking Offices of America) based on short stories written by Damon Runyon imitator H.C. Witwer. Sherlock's Home, directed by comedy veteran Mal St. Clair (and scripted by a young up-and-comer named Darryl F. Zanuck) features Vaughn as working gal/telephone operator 'Gladys Murgatroyd,' and is a delightful comedy that has a refreshing contemporary feel...plus it eschews a lot of the rough-and-tumble slapstick made popular by Mack Sennett in that era (though it doesn't shy away from physical comedy when needed). As previously noted with other films in this collection, this copy of Sherlock's Home appears to be the only surviving print.

The other standout is Papa's Boy (1927), a two-reel comedy starring the incomparable Lloyd Hamilton.  You get a pass if the name isn't familiar; in the 1920s Lloyd enjoyed much of the same popularity afforded Charlie Chaplin and Buster Keaton - Chaplin once admitted to actor-composer Oscar Levant that Lloyd was the one actor of whom he was most jealous, and Keaton revealed in an interview that 'Ham' was 'one of the funniest men in pictures.' (Charley Chase also acknowledged Lloyd's influence; often seeking out motivation for a particular scene by asking himself 'How would 'Ham' play this?') Lloyd is not well represented on home video because most of his cinematic output was lost in a laboratory fire in 1937 that destroyed many film negatives from Educational Pictures, Hamilton's home studio. So what remains of Hamilton's screen legacy can be chalked up to the efforts of fans and collectors.

Papa's Boy features Lloyd as a butterfly-obsessed sissy whose father arranges to go on a camping trip in the hopes that the experience will make a 'man' out of him. It's not one of Hamilton's strongest comedies, but it's an excellent introduction to a comedian that has never really received his proper due because of the low survival rate of his shorts. (For a rollicking short also starring 'Ham,' check out 1925's The Movies, which is featured on the last disc in the 4-DVD collection The Forgotten Films of Roscoe 'Fatty' Arbuckle.) The inclusion of the Hamilton short in this set can really stand as the mission statement of the Accidentally Preserved series - it allows film fans to become familiar with other hard-working mirth makers beyond what film comedy historian Richard M. Roberts once tabbed 'the big three' (Chaplin, Keaton and Harold Lloyd).

Film critic Dave Kehr of The New York Times remarked after the release of Accidentally Preserved: Volume 1: 'This compilation is aimed at specialists, but it is a sterling example of the kind of home-brew work that is now possible in film preservation, and where much future effort will doubtlessly lie.' The home video market, while allowing fans to sample many treasures from the past, still adheres to the bottom line: studios won't release a title unless they're sure they'll get some sort of return on their investment.

While strides continue to be made with MOD releases from Warner, Fox and Sony, Ben Model has decided to carve out his own niche with Undercrank Productions, which has released additional titles along with the Accidentally Preserved series - notably a 1927 feature comedy, Flying Luck, which stars comedian Monty Banks and a young Jean Arthur, a few years away from stardom herself. Accidentally Preserved: Volume 2 is a must-see for fans of silent comedy...but classic movie fans will also want to check it out to learn for themselves 'where's that been?'