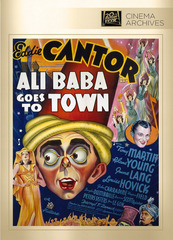 Where's That Been? - Ali Baba Goes to Town

Aloysius 'Al' Babson (Eddie Cantor) is spending his two-week vacation riding the rails -- his destination is Hollywood, where the star-struck Al hopes to grab a few celebrity autographs in his free time. Instead, a mishap involving falling off the train lands him in the middle of a 20th-Century Fox movie set on a production of Arabian Nights; Al then comes close to being trampled by a team of horses and is sent to a studio medical tent for treatment. While convalescing under the supervision of a nurse named Dinah (Virginia Field), Al is approached by a studio flack (John Carradine), who wants him to sign a waiver absolving Fox of all liability in his accident.

Al is able to parlay this incident into a job as an extra on the film...and in overmedicating on a prescription, falls fast asleep. He awakens to find himself in Bagdad in the year 937, and inadvertently gets involved in a bit of palace intrigue involving the Sultan Abdullah (Roland Young), who mistakes him for the son of Ali Baba (he introduces himself as 'Al Babson'). Appointed the Sultan's prime minister, 'Ali Jr.' makes sweeping changes in the way Bagdad is ruled by Abdullah...and when the Sultan's daughter Miriam (June Lang) is unable to marry common sheepherder Yusuf (Tony Martin), Ali suggests the Sultan resign his rule to run as 'president.'

The inhabitants of Bagdad have decided, however, that they want Ali as their president -- and when Ali is swept into office in a landslide, the Sultan orders him 'boiled in oil' for his perceived treachery. Ali beats a hasty retreat, but returns to Bagdad when he learns that Prince Musah (Douglass Dumbrille) has plans to take over the Sultan's rule. Ali succeeds in stopping Musah's plans, eventually awakening to find it was all a dream.

Every now and then a person new to the hobby of old-time radio asks me to explain the appeal of Eddie Cantor. Eddie was a popular entertainer over the airwaves for nearly twenty years, then he made the transition to television (like his other radio brethren and sistren) as one of the rotating hosts of The Colgate Comedy Hour. To modern audiences, Cantor comes across as a curio: he didn't possess the satirical wit of a Fred Allen or the everyman appeal of Jack Benny, but he found his niche as a spirited showman (one of his many trademarks was energetic singing-and-dancing accompanied by enthusiastic handclapping) whose effervescent personality charmed audiences old and now. As curmudgeonly screenwriter Irving Brecher (Shadow of the Thin Man, Meet Me in St. Louis) famously described 'Banjo Eyes': 'His show worked because he sounded like a guy you knew. He would appeal to the heart. He had a certain warmth and spirit. And it worked.'

Believe it or not, Eddie Cantor actually began his movie career in silent pictures: his 1923 stage hit Kid Boots was brought to the screen in 1926 (with Clara Bow as his leading lady), with Special Delivery released the year after. A few shorts and an appearance in Glorifying the American Girl (1929) paved the way for his success in the 1930's musical talkie Whoopee! (also based on a Cantor stage hit in 1928). Throughout the thirties, Eddie wowed large audiences on radio while luring them into motion picture theaters with Samuel Goldwyn-produced vehicles like The Kid from Spain (1932), Roman Scandals (1933) and Kid Millions (1934). Ali Baba Goes to Town (1937) was released by 20th-Century Fox eighteen months after Cantor ended his association with the independent Goldwyn, with the studio spending nearly million on the production (most of it on the Bagdad set, erected on a twenty-five acre lot).

If you've seen Cantor's Roman Scandals, you'll detect a similarity between it and Ali Baba; both movies feature a hero who travels back in time to an ancient era, and the comedy originates from the Cantor character ('Oedipus' in Scandals, 'Ali Baba, Jr.' in Ali Baba) having to adjust to the unfamiliar culture through his twentieth-century ways. But Ali Baba also echoes an earlier Fox production in Will Rogers' A Connecticut Yankee (1931); both comedies satirize the topicality of their times (FDR and the New Deal) by portraying the protagonists as 'time travelers.' Gene Fowler, one of three authors on the story that ultimately became the basis of the screenplay written by Harry Tugend and Jack Yellen, even acknowledged the inspiration of the Rogers film, noting it was Cantor himself who got the ball rolling by suggesting the idea for the opening train sequence with the tramps (Stanley Fields, Warren Hymer).

Your enjoyment of Ali Baba depends on your familiarity with topicality from that particular time period; many of the gags in the movie revolve around Ali's organizing of work programs for the inhabitants of Bagdad and suggesting Abdullah abdicate his throne and run as 'president' so daughter Miriam may achieve a little happily-ever-after with commoner Yusuf. Two of the more subtler jokes will escape notice if the individual isn't well-versed on the star's background: in one scene, as the people of Bagdad decide they prefer Ali Baba as 'president,' the marching band in a campaign parade plays 'When I'm the President (We Want Cantor)' -- a song spotlighted during the entertainer's mock Presidential campaign in 1932. My favorite joke is when Ali Baba meets the grandfather of 'Deenah' (the Bagdad counterpart to Nurse Dinah) and Gramps tells him: 'May a bountiful Allah bless you with many sons.'

'Many sons? Me?' Ali replies as he does an eyeroll (and with Eddie Cantor, we're talking EYEROLL). Cantor's real-life daughters -- Marjorie, Natalie, Edna, Marilyn and Janet -- and his repeated attempts to find them husbands (as well as his apparent inability to produce a son) were a running gag on his radio broadcasts and in his movies along the order of Jack Benny's well-known proclivity towards parsimony. Even if the comedy flies under your radar, there's still a lot to entertain moviegoers -- though I will warn you right now that Cantor was a disciple of performing in blackface, and did it every opportunity he got in his cinematic vehicles. On the plus side, he performs alongside some amazingly talented specialty acts including the Pearl Twins, the Peters Sisters and the incomparable Jeni Le Gon. Raymond Scott and His Quintet also perform in Ali Baba with gusto ('Twilight in Turkey'); you might not immediately recognize Scott but you've heard some of his better-known compositions ('Powerhouse,' 'Dinner Music for a Pack of Hungry Cannibals') adapted by Carl Stalling in a stray Looney Tune or Merrie Melodie.

Eddie Cantor is supported in Ali Baba Goes to Town by an engaging cast of familiar performers: Roland Young is the Sultan (and does a little 'trucking' during one of Eddie's musical numbers), with Douglass Dumbrille and John Carradine providing first-rate villainy along with Louise Hovick as the treacherous Sultana -- Hovick, of course, is better recognized by her nom de ecdysiast, Gypsy Rose Lee. When Cantor's 'Ali Baba' finally returns to the present day, he winds up at a gala premiere for Arabian Nights featuring a star-studded array of celebs including Sonja Henie, Tyrone Power, the Ritz Brothers and Shirley Temple (sure they're all Fox employees...'cause they cribbed the premiere footage from the opening of Temple's Wee Willie Winkie [1937]). (Eddie Cantor also appears at the premiere...as Eddie Cantor, natch.)

Eddie Cantor continued making movies in the 1940s, appearing in both Warner Brothers all-star spectaculars Thank Your Lucky Stars (1943; again in dual roles as himself and 'Joe Simpson') and Hollywood Canteen (1944), and in later solo projects (often teamed with Joan Davis) like Show Business (1944) and If You Knew Susie (1948). Ali Baba Goes to Town is a fine representation of his film work, showcasing the unbeatable singing and dancing talents of the 'Apostle of Pep' who went 'all out' to entertain audiences and had the time of his life doing so.