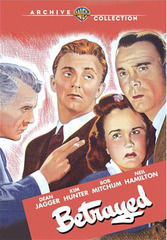 Where's That Been? - Betrayed

Newlywed Millie Baxter (Kim Hunter) is giddy with delight during her train trip to New York: she'll be meeting her husband Paul (Dean Jagger) in the Big Apple, a man she married on a whim after just three dates. She's scheduled to meet him at the Sherwin Hotel, but by the time she arrives, Paul hasn't turned up yet. An old flame of hers from the same Ohio hometown in which she grew up, Fred Graham (Robert Mitchum), is on hand to greet her, and though he's still dealing with the regret that Millie chose Paul instead of him, he does what he can to get her settled.

After a night at the Sherwin, there's still no sign of Mr. Baxter so Fred offers to escort Millie to the police station to fill out a missing persons report. She's questioned by a homicide detective, Lieutenant Blake (Neil Hamilton), instead; Blake takes quite an interest in a telegram Millie received from Paul that originated from a hotel in Philly. Paul spent that night in the company of a man named Sam Prescott (Dick Elliott), who was feeling no pain after several drinks and was hospitable enough to invite Paul to share his hotel room. The next morning, housekeeping find Prescott's body, murdered after being strangled with a silk stocking.

When Millie finally makes contact with Paul -- he meets her in a darkened apartment he's rent for the two of them -- he starts to exhibit rather odd behavior. He doesn't want Fred over to supper with him and Millie, and he tells her he needs to leave rather quickly for a sales trip, even though Millie has learned from Fred that Paul is no longer employed with the shirt company for which he worked as a salesman. Is Paul responsible for Prescott's murder? Millie is unsure, but she's determined to stand by her man.

Author and film historian Don Miller states in his invaluable reference book B Movies that Betrayed (1944) was the finest 'B' film ever made. I'm not certain I would be able to go that distance in my praise for the film, but considering the movie was cranked out in the course of ten days at the King of Poverty Row, Monogram, it's an extremely well-crafted and polished little thriller. Orson Welles famously remarked of the film: ;'It isn't as slick as Double Indemnity or as glossy as Laura, but it's better acted and better directed...than either.'

The man seated in the director's chair on the film was an individual movie audiences would later recognize as schlockmeister William Castle, father of such gimmicky entertainments as House on Haunted Hill (1958), The Tingler (1959) and 13 Ghosts (1960). Castle helmed his first feature film in 1943 with The Chance of a Lifetime, an entry in Columbia's popular Boston Blackie franchise. It was a fairly routine assignment for the novice director (in later years, Castle maintained the fiction that he re-arranged the reels of Lifetime in the editing room in order to make it work) and it didn't exactly bowl over audiences or cause the adding machines at Columbia to work overtime on box office receipts. But the studio brass was impressed enough with Castle's effort to push additional assignments in his direction; Bill held the reins on several entries in Columbia's other film series, notable The Whistler and Crime Doctor.

It was on a pair of Whistler films (The Whistler, The Mark of the Whistler) that Castle started to dabble in the film style that would later come to be recognized as noir. Betrayed is a first-rate example of this -- it was originally released as When Strangers Marry, and then retitled three years later (the print on the Warner Archive DVD acknowledges the title change in the opening credits) to take advantage of supporting player Robert Mitchum's burgeoning popularity. Betrayed was also produced at a time when World War II was still raging on and the concept of couples quickly tying the knot was not only a popular one, it was a topic explored in such films as Since You Went Away (1944) and The Clock (1945).

When Betrayed was re-released, the top billing of Mitchum sort of scorched the film's surprise ending (although if you've seen as many of these thrillers as I have it probably won't be too surprising) but it remains an enjoyable vehicle thanks to Castle's direction, which makes use of interesting set pieces (much like his idol, Alfred Hitchcock) like an after-hours juke joint in Harlem. The acting in the film is also worthy of major acknowledgement: Dean Jagger, as the suspicious Paul Baxter, would later win an Academy Award for his first-rate supporting performance in Twelve O'Clock High (1949), while Kim Hunter would nab a trophy for Best Supporting Actress a few years later for A Streetcar Named Desire (1951).

Betrayed was Hunter's third Hollywood film, and it's interesting to note the parallels between it and her debut in the Val Lewton-produced The Seventh Victim (1943): both of her characters are wide-eyed innocents who find themselves in the hostile environs of New York City, trying to locate loved ones that may be in trouble. Character actor Lou Lubin (whom old-time radio fans remember as 'Shorty the Barber' on Amos 'n' Andy) plays a bartender who identifies Jagger's character as the man who shared the murder victim's hotel room that night, but he's also in Victim, as the private investigator hired by Hunter's Mary Gibson to locate her sister Jacqueline (let's just say he fares better in Betrayed).

Former leading man Neil Hamilton, who co-starred in the first two Johnny Weissmuller Tarzan films (Tarzan the Ape Man, Tarzan and His Mate) and later emoted as 'Commissioner Gordon' on TV's Batman acquits himself nicely in Betrayed as the detective investigating the 'silk stocking' murder, and there are also excellent contributions from Dick Elliott as the doomed Prescott (the ubiquitous Elliott turns up in tons of classic movies -- he's perhaps best remembered as the guy on the porch who encourages Jimmy Stewart's romantic overtures to Donna Reed in It's a Wonderful Life) and Minerva Urecal doing what she does best as a stern landlady who rents Hunter a room while she and Jagger are on the lam. You'll also recognize Robert Mitchum's future Out of the Past co-star Rhonda Fleming as the girl who makes herself at home in Hunter and Jagger's train compartment toward the end. Byron Foulger, another character great who was in almost as many movies as Elliott, can be glimpsed as a 'victim' on a slideshow projector presentation Hamilton shows Hunter. Even director Castle gets into the act -- that's him in the picture that Hunter gives to the police when they request a photograph of her husband.

Though Betrayed was released by Monogram, the picture was actually a product of the independent King Brothers (Frank, Maurice and Herman), who were responsible for some of classic noirs also in the Monogram stable including Dillinger (1945) and The Gangster (1947). Not everything the King siblings touched turned to gold, however -- they also produced I Escaped from the Gestapo (1943), previously discussed here at 'Where's That Been?' (and featuring Betrayed actors Jagger and Edward Keane!).