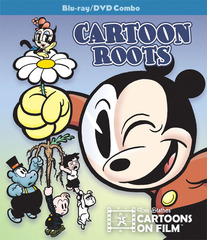 Where's That Been? - Cartoon Roots

Even if you're not old enough to remember when animated cartoons were every bit as big a draw as the main feature showing at your neighborhood movie theatre, you're probably familiar with the fact that cartoon icons like Bugs Bunny and Mickey Mouse unleashed their shenanigans on the big screen before going into retirement on the small screen. You see, cartoons weren't just for kids -- they were produced for all ages! Animated cartoons are nearly as old as motion pictures themselves; as far back as 1900, pioneers like Emile Cohl, Winsor McCay and J. Stuart Blackton ushered in the art of moving screen images that were, in a nutshell, drawings brought to life.

One of J. Stuart Blackton's earliest efforts, Lightning Sketches (1907), is one of several shorts (fifteen in all) featured on a collection entitled Cartoon Roots, a joint DVD/Blu-ray venture between Thunderbean Animation -- a company whose previous home video releases include Technicolor Dreams & Black and White Nightmares and Noveltoons: Original Classics -- and Cartoons on Film, a company specializing in animated shorts from the silent era. Tommy J. Stathes is the CEO of the latter establishment, a highly respected film archivist/historian whom you might have seen chatting it up with Turner Classic Movies' Robert Osborne back in October of 2014 on a very entertaining special entitled 100th Anniversary of Bray Studios.

A few of the selections from Cartoon Roots were also showcased on the (John Randolph) Bray anniversary special. The Circus (1920) is one example, an 'Out of the Inkwell' cartoon featuring Koko the Clown (who's frustrated by the antics of an ornery circus equine), who would later migrate with the creative Fleischer brothers (Max, Dave, and Joe) to a studio that also became home to such cartoon icons as Popeye and Betty Boop. The same goes for Lost and Found (1926), in which Dinky Doodle and his dog Weakheart give chase to a kidnapper who's made off with a fetching young lovely. The live-action animator in the cartoon dons a Sherlockian disguise and enters the short, in cartoon form, to help out Dinky and his pal, and that animator is none other than Walter Lantz, who later started his own studio that put stars like Andy Panda, Woody Woodpecker and Chilly Willy on the payroll.

So you can see why the presentation is titled Cartoon Roots; it features some of the earliest work by individuals who ultimately became prominent figures in the field of animation. Cartoons on Tour (1915) is from the Raoul Barre studio, one of the earliest animation companies (future film director Gregory La Cava was on the payroll) and Tour spotlights a nice mix of live-action and animation in one of Barre's amusing 'Grouch Chaser' frolics. The Jolly Rounders (1923) is an early 'Aesop's Fables' effort from Paul Terry, who also worked his way up to animation studio mogul -- his Terrytoons featured such stars as Mighty Mouse and Heckle and Jeckle. (The 1923 cartoon Springtime is another one of Terry's 'fables,' starring one of his earliest cartoon stars, Farmer Al Falfa.) Animation legend Dick Huemer (in tandem with Sid Marcus and Art Davis) is represented with a 1930 RKO entry, The Milkman, starring the now-forgotten Toby the Pup.

When I was growing up, weekends were often set aside to pay my father's parents a visit, and one of the things I recall most about dropping in on Grandma and Grandpa was Grandpa subscribed to a magazine entitled The Good Old Days, featuring reprints of comic strips from that bygone era. So some of my favorite shorts on Cartoon Roots feature characters from the 'funny papers': Bud Fisher's Mutt and Jeff are represented with Fireman, Save My Child (1919); George Herriman's Krazy Kat in Scents and Nonsense (1926, quite different from the depiction of K.K. in the comics); Walter Hoban's Jerry on the Job in The Bomb Idea (1920). Watching these cartoons was not unlike seeing the comic pages literally come to life. I had long thought that the early era 'Bobby Bumps' character (who appears on Roots in Bobby Bumps Starts to School [1917]) was based on R.F. Outcault's Buster Brown, but in an extra included among the many in this set, there's revealing background that Bumps' creator Earl Hurd drew an embryonic version of his creation entitled 'Brick Bodkin' for The New York Journal from 1912 to 1914.

Rounding out the cartoons on Cartoon Roots are Col. Heeza Liar, Detective (1923), a most entertaining short (which was also featured on TCM's Bray tribute) similar to Lost and Found in that the Colonel must use his powers of deduction to track down a rooster thief. Sadly, Heeza Liar never made it to the comic strip pages (there probably would have been competition with the likes of Happy Hooligan and Hawkshaw the Detective), but Pat Sullivan's Felix the Cat did shortly after his debut on the silver screen. The famous feline stars in the inventive Felix Comes Back (1923) in the Cartoon Roots collection. The last cartoon is a 1932 Van Beuren offering entitled The Farmerette, which is the only entry here to feature spoken dialogue (though some of the others feature it among the sound effects). It treads too far into Betty Boop territory, and the imitation unfortunately makes it the weakest short in the collection.

The most incredible find on Cartoon Roots -- and one that definitely makes it worthy of 'Where's That Been?' status -- is a 1930 short entitled Hoe-Toe Mollie. It stars the irrepressible Binko the Cub, a would-be employee of the Romer-Grey studios (the 'Grey' was the son of famed Western novelist Zane Grey). A series that never got off the ground, Binko starred in two unreleased shorts (the first being Arabian NIghtmare) that featured work from Bob and Tom McKimson, Preston Blair, Pete Burness, Cal Dalton, Ken Harris and Riley Thomson. These animators would later work for the likes of Warner Bros., MGM and Walt Disney. Both shorts were long believed to be lost, but Stathes and collaborator David Gerstein unearthed a mostly-complete print of Mollie in the Library of Congress, and with that, film preservation was allowed to do that voodoo it does so well.

If you're as crazy about cartoons as I am, I know you will enjoy watching Cartoon Roots. Keep in mind that while the shorts are a bit primitive (this was many years before strides like animation cels and the like came about) it doesn't make them any less entertaining, and some of them feature some really side-splitting gags. (I never fail to marvel at the imaginative ways Felix finds to use question marks and his tail.) Animation lovers, silent film devotees, and aficionados of movie history will unquestionably want to see Cartoon Roots on their DVD or Blu-ray shelf.