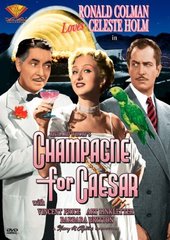 Where's That Been? - Champagne for Caesar

There's really only one word to describe Beauregard Bottomley (Ronald Colman): genius. A scholar who has spent much of his time on this earth poring over and devouring books, Bottomley is a know-it-all -- there's no subject on which he's not well-versed, and yet he manages to be a likable sort despite his disdain for people he considers his 'inferiors.' He demonstrates this scorn as he stands outside an appliance store window with his sister Gwenn (Barbara Britton), watching an edition of the popular quiz program Masquerade for Money on one of their television sets. Money is hosted by emcee Happy Hogan (Art Linkletter), a man described by Beauregard as 'the forerunner of intellectual destruction in America.' 'If it is noteworthy and rewarding to know that 2 and 2 make 4 to the accompaniment of deafening applause and prizes,' observes Bottomley, 'then 2 and 2 making 4 will become the top level of learning.'

Being a genius has made Beauregard unemployable -- still, he's always in there pitching, and the employment office sends him to the offices of Milady Soap ('the soap that sanctifies')...coincidentally, the sponsor of the Masquerade for Money program. Bottomley would seem to be a shoo-in for a job in research for the company, but his interview with company CEO Burnbridge Waters (Vincent Price) does not go well at all. Waters detests the fact that Beauregard demonstrates a sense of humor, and Bottomley is fired before he even starts. So Beauregard concocts a plan: he volunteers as a contestant on Masquerade for Money, and is able to answer so many questions correctly he wins a total of 20. But Beauregard refuses to take the money; instead, he arranges to return to the program every week to answer a question -- the more difficult, the better -- and with each answer, his winnings continue to multiply, and so does the audience share for the program. Moreover, the sales of Milady Soap start to soar as well.

Eventually, Bottomley's scheme is revealed to the neurotic Waters: Beauregard plans to eventually increase his winning total to forty million, which will be enough money to put the Milady Soap Company out of business. Waters tries a countermove by cancelling sponsorship of the program, and watches sales of the soap plummet as well. So Waters takes the only road left available to him: he hires a 'Mata Hari' named Flame O'Neill (Celeste Holm) to distract Bottomley -- when the light hits her in a certain fashion, she's gorgeous, and she uses her feminine wiles to distract Beauregard from his goal.

The Preston Sturges-like Champagne for Caesar (1950) is a first-rate satire on quiz shows, scripted by Hans Jacoby and Fred Brady, and directed by Richard Whorf, who can number films like It Happened in Brooklyn (1947) and Luxury Liner (1948) on his resume. One of Caesar's associate producers, Harry M. Popkin, might be a familiar name to classic movie fans as well; the independent producer is best known for the noir classic D.O.A. (1950), but he also had a hand in such sleepers as Impact (1949) and The Well (1951). Popkin had a talent for, according to reviewer Glenn Erickson, 'assembl[ing] interesting talent into unusual entertainment packages' and the powerhouse cast of Caesar unquestionably bears this out.

The star trio of the film -- Ronald Colman, Celeste Holm, and Vincent Price -- work wonders with the comedic script; Price in particular has one of his finest non-horror showcases as the irrational soap manufacturer constantly clutching at straws to thwart the 'very well-informed Frankenstein' that is Bottomley for bringing about his financial ruin. The scenes between Price and Colman are sublime, and Holm also demonstrates a delightful flair for the material, punctuating it with girlish giggles and come-hither glances at her 'victim.'

While there's an emphasis on the television aspect of Masquerade for Money in Caesar, there are a number of references to the show being a radio program, which is one of the reasons why I'm so fond of this modest comedy. To put it into perspective, there was a time in radio when big money quiz programs ruled the airwaves; one in particular, Stop the Music (which is jokingly referenced in Caesar), was responsible for bringing comedian Fred Allen's long radio reign to an end. This is why some people won't benefit from the full impact of Caesar's satire (or they'll wind up equating it with the quiz show scandals later in the decade), and why the presence of Art Linkletter (as the film's quiz show host) makes the proceedings all the more hilarious. Linkletter was the host of a popular radio stunt show called People are Funny, which was also fashioned into a film in 1946 and later became a long-running TV series as well. Linkletter's kidding of his persona is akin to Roy Rogers being in on the joke in the 1952 Bob Hope vehicle Son of Paleface, and Art gives a surprisingly good performance as an obnoxious heel who turns out to have some redeeming qualities by the time Caesar calls it a wrap.

Star Ronald Colman was no slouch when it came to emoting over the airwaves; he demonstrated his comedic chops as a semi-regular on Jack Benny's radio show (he played Benny's next-door neighbor), and that led to a program of his own (on which he appeared with his real-life wife, Benita Hume), the delightful comedy-drama The Halls of Ivy. Vincent Price was also doing radio at this time, appearing as Leslie Charteris' literary creation Simon Templar on The Adventures of the Saint. And while Barbara Britton was a couple of years away from TV fame as one-half of Mr. and Mrs. North, she and co-star Richard Denning would take over the radio North roles from Alice Frost and Joseph Curtin in 1953.

Of course, I would be remiss if I didn't point out that the voice of 'Caesar,' the champagne-swilling parrot of the movie's title, belongs to none other than The Man of a Thousand Voices himself, Mel Blanc. (I'd list Blanc's radio credits but I've been told by The Powers That Be at ClassicFlix that we're starved for space this week.) Mel is one of the nice surprises in Caesar, a marvelous funfest that also features appearances from Byron Foulger (of course!), John Eldredge, Lyle Talbot, John Hart and real-life radio personalities George Fisher and Gabriel 'Ah, there's good news tonight' Heatter. Rent this one soon.