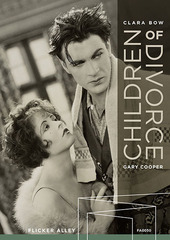 Where's That Been? - Children of Divorce

'Isn't anyone ever going to come for us?' wails young Kitty Flanders (Joyce Coad) to her best pal Jean Waddington (Yvonne Pelletier) as the two of them watch their classmates reunite with visiting family members. Both girls, 'children of divorce,' have been housed in a Paris convent school so that their presence doesn't become an inconvenience to their neglectful parents.

It is while the two girls are attending this school that they make the acquaintance of Edward 'Ted' Larrabee (Don Marlon) -- though in actuality, Kitty already knows Ted as her next-door neighbor. Jean, however, becomes interested in Ted despite his predilection for being 'woman-proof,' as his father (Edward Martindel) describes it. The two jokingly agree to marry one another once they're of age.

With the passage of time, Jean (Esther Ralston) becomes a wealthy heiress, and she visits a grown-up Kitty (Clara Bow) at the home Kitty shares with her mother (Hedda Hopper). Mother Flanders has been married five times in the interim, and has instructed her daughter that if she is entertaining thoughts of marriage it must be to a wealthy man, which is why Kitty can't tie the knot with her true love, Prince Ludovico de Stax (Einar Hanson). (Prince Vico may have a fancy-shmancy title but he does not have two nickels to rub together.) Kitty and Jean are reunited with their childhood pal Ted (Gary Cooper) when he comes riding up on his horse in time for cocktails.

Ted is serious about marrying Jean; he's very much in love with her. But Jean isn't ready to commit to happily-ever-after with her true love until Ted agrees to make something of himself: he's been coasting on his family fortune. So Larrabee decides to put his engineering degree to use and hang out his shingle in the business of building bridges. One day at the office, Ted gets a visit from Kitty and her wild crowd who convince him to engage in a little 'roadhouse revelry' with a raucous party from dusk till dawn.

The next morning, Ted awakens with the mother of all hangovers and the late breaking news that he married Kitty in his intoxicated state. Just in time for him to receive a note from Jean -- she's ready to say yes to sashaying down the aisle. Talk about awkward!

Owen Johnson's novel Children of Divorce received the silver screen treatment from Paramount in 1927 as a vehicle for the studio's biggest star, Clara Bow. Bow chose as her leading man actor Gary Cooper, who had a brief bit as a newspaper reporter in the film that gave the exuberant Clara her nickname ('The 'It' Girl'), It (also released in 1927). (Clara and Gary also appeared in a third film that year, the Best Picture Oscar winner Wings.) If you're familiar with Clara's biography, it comes as no surprise that the two players became serious off-screen as well as on...a recurring habit with Bow, who also had assignations with Gilbert Roland (her co-star in 1925's The Plastic Age) and Victor Fleming (director of Clara's vehicle Mantrap [1926]).

Memorably described as 'someone to stir every pulse in the nation' by author F. Scott Fitzgerald, Clara Bow has been called by many a critic the movies' first sex symbol, and there's simply no denying Bow was such a presence on the silver screen it's impossible to take your eyes off her. I myself have been critical of Clara's thespic ability despite my undying admiration of her work, but with every film I see her in, I find myself constantly re-evaluating her talent. She's the best thing going in Children of Divorce and her final moments in the movie may be the finest acting she ever did in any of her feature films.

The chief problems with Children of Divorce lie with her co-stars: Esther Ralston phones in her performance, and Gary Cooper is woefully miscast (he starts out well, but after he discovers that he's married Bow's character while in a drunken stupor Coop looks shell-shocked for the rest of the movie), decidedly out-of-place when he's not tall in the saddle. The material never rises above soapy melodramatics, though director Frank Lloyd (a two-time Best Director Oscar winner for The Divine Lady [1929] and Cavalcade [1933]) makes a game attempt to apply paddles to Divorce when the occasion merits.

There's a funny scene where Coop's Larrabee leaves his office to discuss a business proposition and the camera tracks him down the hall, then stops at the elevator. The door opens, and Clara and her friends (armed with briefcases) march single file down to his office, where the liquor starts to flow freely not long afterward. (Legendary director Josef von Sternberg worked uncredited on Divorce, helming Clara's amazing final scene.)

Despite its dramatic limitations, Children of Divorce gets props for not taking the easy way out with its ending (it's open-ended, allowing the audience to speculate on the fate of its characters). (Let the record show I resisted the temptation to make a 'wrap things up in a pretty Bow' joke.) In that same spirit, Flicker Alley earns major kudos for releasing the movie to DVD and Blu-ray; it's a 4K scan from a near-flawless print that originated with the Library of Congress, who acquired the film's negative in 1969 (and did a second restoration in 2000 to correct previous imperfections), and produced by film preservationist David Shepard. (There's some noticeable nitrate decomposition in two scenes where Bow's character composes a suicide note, which kind of works in a visual sense if you imagine Kitty having trouble seeing through her tears.)

Accompanied by a wonderful score from the celebrated Mont Alto Motion Picture Orchestra, the DVD/Blu-ray presentation of Children of Divorce also features an informative booklet (with passages from author David Stenn's biography Clara Bow: Runnin' Wild) and a bonus in the 1999 TCM documentary Clara Bow: Discovering the 'It' Girl. It's essential viewing for Bow fans, and for those of us who are ecstatic when silent film classics are given a new lease on life...it's a definite keeper.