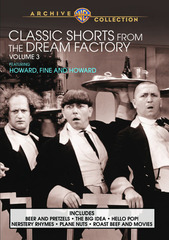 Where's That Been? - Classic Shorts from the Dream Factory, Vol. 3

From 1934 to 1959, the knockabout slapstick trio known as The Three Stooges were the kings of two-reel comedy. Columbia Pictures established their shorts department in 1933 (under the direction of Jules White) after years of distributing two-reelers made by independent studios and Moe, Larry & Curly were among the first funsters hired to headline the studio's efforts. Dismissed by critics but beloved by theatergoers, the Columbia shorts -- and those starring the Stooges in particular -- were at best a fond remembrance of the years when comedy two-reelers often outdrew the main feature. They were warmly welcomed by audiences, particularly since titans of the past such as Mack Sennett and Hal Roach were by that time easing out of the shorts-making business.

Before their Columbia success, the Stooges were in the employ of a comedian named Ted Healy who laid the groundwork for what eventually became one of the most beloved comedy teams by hiring Moe Howard to 'stooge' in his vaudeville act in 1921. Healy would also bring Moe's brother Shemp aboard two years later, and added a third stooge in Larry Fine in 1925. The success of 'Ted Healy and His Stooges' as a stage act led to the troupe being hired by Fox in 1930 to appear in the feature film Soup to Nuts. (A fourth 'stooge,' Fred Sanborn, also appeared in the picture, having joined Healy and the others at the time of Larry's hiring.) Soup to Nuts did not cause the hearts of movie critics to go pitter-pat, but Fox was impressed enough to offer the Stooges a contract...minus their boss (who successfully sabotaged his partners' filmic endeavors for the time being). There would be periods of separation and reunion in the interim years (Shemp finally left the group in 1932 and would be replaced by his brother Jerry, better known as 'Curly') before MGM signed Healy and Company to a contract in 1933.

At MGM, Ted and the Stooges served as the comic relief in films such as Turn Back the Clock (1933) and Dancing Lady (1933) -- they even displayed their roughhouse shtick in Meet the Baron (1933), which already had two comedians in Jimmy Durante and Jack Pearl (as his radio character 'Baron Munchausen'). When they weren't needed for feature film work, the studio utilized the troupe in a series of comedy two-reelers, five of which were released between 1933 and 1934. Until recently, only four of those shorts were available for viewing: the fifth, Hello Pop (1933), was reportedly destroyed in the 1967 studio fire that also devastated London After Midnight (1927) and The Rogue Song (1930), two highly sought-after 'lost films.'

But in December of 2012, an Australian film collector named Malcolm Smith revealed that he had a nitrate print of the Technicolor Hello Pop he had obtained from a fellow collector in the 1950s. The Vitaphone Project then undertook the necessary preparations to ensure that Warner Bros had access to the print for restoration, and the finished project premiered at NYC's Film Forum in the fall of 2013. Hello Pop has now been reunited with its shorts brethren in the recently released Classic Shorts from the Dream Factory, Volume 3 from Warner Archive.

I would like to be able to tell you that Hello Pop is an undiscovered comedy masterpiece...but I'm all too aware of the penalties for committing perjury. Hello Pop serves mostly as a curio for Stooges fans, with a paper-thin plot of stage manager Healy attempting to organize a musical comedy revue and getting precious little assistance from his inept and temperamental crew. Moe, Larry & Curly play Healy's 'sons' -- the three of them are dressed in Little Lord Fauntleroy clothing -- and only add to the confusion; there are some scattered chuckles here and there (and traces of some of the routines the trio would fall back on once they began their long stint at Columbia) but most of the short's running time is cluttered with discarded musical numbers from a scrapped 1930 revue entitled The March of Time. Character actors Ed Brophy (looking remarkably svelte) and Henry Armetta are on hand for support, as is Bonnie Bonnell (billed in the Healy-Stooge shorts as 'Bonny'), a performer with minimal talent whose presence in the two-reelers can best be explained by the fact that she was Ted Healy's girlfriend.

Hello Pop's concept of Moe, Larry & Curly as Healy's overgrown progeny was established in the first short the team made for MGM, Nertsery Rhymes (1933). Healy's attempts to do a little catting around on the town are stymied by his 'sons' insistence that he tell them a bedtime story. Bonnie Bonnell plays a 'good fairy' who performs 'The Story of the Lady in the Fan' and another musical number ('The Woman in the Shoe') from a creaky MGM musical entitled Lord Byron of Broadway (1930) compete with the material supplied by Healy and his Stooges. Rhymes isn't a great short but it is a bizarre and entertaining one -- the sight of Moe, Larry & Curly in footy pajamas is not easily forgotten, and their exchanges with boss Healy are fairly sharp. (Fans of the late, lamented USA Network program Night Flight might remember that Flight's 'bumpers' were often comprised of clips from this short.)

Healy and Company's next short, Beer and Pretzels (1933), is probably my favorite of their MGM offerings. Again, it's not great comedy but the premise -- Ted and his Stooges land jobs as waiters in a nightclub -- allows them to reprise a lot of the material from their stage act (it is also, I believe, the first instance on film where Curly utters 'I'm a victim of circumstance!') and you'll be genuinely amused by the fact that a lot of the physical comedy mimics the same slapstick that would feature so prominently in their work for Columbia. (I also like how the Stooges appear to be doing their own pratfalls; later, as Columbia's bread-and-butter, the trio would have to rely on all-too-obvious stuntmen to do the rough stuff.) For a look at how Ted and the gents performed on stage, Plane Nuts (1933) is also worth the time and effort (the gang relies on much of their vaudeville material, with future Stooges gags aplenty)...even though it comes to a screeching halt when Busby Berkeley-like musical numbers are shoehorned into the proceedings.

Healy and his partners' final MGM short was The Big Idea (1934). Moe, Larry & Curly have a minimal amount of participation in this one -- they serve mainly as a running gag when the three of them enter the office of writer Healy, with various musical instruments that squirt water on their boss at the appropriate time. The Stooges are sort of shunted aside for a lengthy sequence featuring the Radio Rogues, a trio of impersonators (Eddie Bartell, Jimmy Hollywood, Henry Taylor) who turn up in such feature films as Going Hollywood (1933) and whose specialty was imitating on-the-air personalities like Ben Bernie and Amos 'n' Andy. (Interestingly enough, the three Rogues were later employed briefly at the same Columbia studio cranking out the Stooges comedies.)

As a bonus, a 2-strip Technicolor two-reeler entitled Roast-Beef and Movies (1934) is included on the Classic Shorts set; the star of Movies is a dialect comedian named George Givot (you may have come across him in Road to Morocco and Du Barry Was a Lady) who plays a dolt trying to sell a movie to a producer (once again, musical numbers from Byron and 1930's Children of Pleasure pad Movies' running time). His assistants are played by Bobby Callahan and Curly Howard, in a rare instance of not being flanked by his more famous partners. Curly Howard was a vastly underrated comedian who understandably remains popular with generations of movie fans old and new...but without Moe and Larry, he wasn't all that impressive as a solo funnyman. (I have always been and shall forever remain a Shemp partisan, to be honest.)

We know, of course, that Moe, Larry & Curly went on to become one of the most successful comedy teams in the history of movies once they bid their boss Ted Healy adios...but Healy's career as a solo act wasn't too shabby, either. Healy would provide comic relief in features like Mad Love (1935) and San Francisco (1936), and might have gone on to similar triumphs had he not died tragically in 1937 (the details surrounding his death are still a subject of conjecture and controversy today). Healy is not everyone's particular cup of Earl Grey (though he influenced a number of comedians, notably Milton Berle and Bob Hope) but any Three Stooges fan worth his/her salt will want to check out their humble origins in this splendid set.