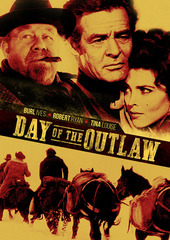 Where's That Been? - Day of the Outlaw

The dead of Wyoming winter brings cattle rancher Blaise Starrett (Robert Ryan) and his foreman Dan (Nehemiah Persoff) into the town of Bitters because, as Starrett explains to town shopkeeper (Donald Elson), 'I need a shave.' But it's really a personal matter for Starrett: on the way into town he's spotted a load of barbed wire in a wagon belonging to homesteader Hal Crane (Alan Marshal), and he knows Crane is going to make good on his intention to erect fences out by his property. Blaise has warned his nemesis that he won't stand for it, even to the point of threatening to kill him.

With the arrival of Helen Crane (Tina Louise), Hal's wife, we will soon learn that Starrett's vendetta against Crane involves a little more than just a disagreement over barbed wire fences. Helen and Blaise had a previous affair, but she's elected to stay with her husband, and she even begs Blaise not to start trouble. Though Hal fearfully knows Starrett might kill him, he's determined to hang on to what is his. Blaise responds enraged: 'Well, I've been doing that for twenty years and I intend to keep on doing it! And no pig-bellied farmer's going to stop me!' Fortunately, the rancher insists on getting a good night's sleep, postponing his dealing with Crane until the morning.

Come the dawn, Hal finds two other farmers who will back his play with Starrett -- so the unavoidable showdown is underway when Blaise tells Dan to roll a whiskey bottle along the length of a bar, when the bottle hits the floor, the gunplay will commence. This tense moment is shattered by the arrival of Captain Jack Bruhn (Burl Ives), a former Union Army officer, and several men comprising his gang. Bruhn and his men have robbed an Army payroll of 0,000 in gold, and the U.S. Cavalry is right on their heels. The men under Bruhn's command encompass little more than cutthroats and reprobates (with the exception of an older man nicknamed 'Shorty' and a young teen named Gene), but they've been ordered by their commander to be on their best behavior while in Bitters: no fighting, no drinking...and no women.

It's a situation that's going to require the farmer and the cowman be friends: Bruhn is suffering from a gunshot wound, and the only medical attention available comes from the town veterinarian, 'Doc' Langer (Dabbs Greer). Despite his inexperience, Langer is able to patch up Bruhn, but suspects there might be internal bleeding involved, though he's not enough of an expert to make that confident diagnosis. It matters little in the long run: if Bruhn dies, there'll be no one to keep control of his renegade soldiers, which means Starrett is going to have to devise a solution to defuse the problem, and fast.

Lee Edwin Wells wrote the 1955 novel that would reach movie screens as Day of the Outlaw (1959), a tale that was also publicized in serial form in many newspapers at the time. The rights were purchased by producer Buddy Adler for actor Robert Wagner, but it was Academy Award-winning screenwriter Philip Yordan who fell in love with the material and insisted on putting together the script. The director on Outlaw is Hungarian emigre Andre de Toth, who had ventured into 'noir western' territory before with the underrated oater Ramrod (1947). (De Toth is perhaps best known for directing the 3-D classic House of Wax, which was a major effort for a filmmaker who was blind in one eye.)

De Toth complained about...well, practically every aspect involved in the making of Outlaw. But not without good reason. He revealed in Anthony Slide's 1996 book De Toth on De Toth that the film's producers were slow to comprehend his approach to Yordan's script, and also legitimately griped that the crew hired to build the movie's town (constructed in Oregon) paid no attention to his compass headings and constructed Bitters facing the wrong direction. (Rather than expend additional weeks of shooting to get around this screw-up, he ordered the set torn down and rebuilt.) To top it all off, he fought the producers on shooting the movie in black-and-white. 'Had I shot it in color, the green pine trees covered with snow, the soft glow of candles, the dancing tongues of flames in the fireplaces would have radiated warmth and safety and the joy of peace on earth. A 'Merry Christmas' card from fairy-tale land,' de Toth pointed out.

The making of Outlaw was no picnic for Yordan, either. The screenwriter considered it one of his best movie scripts, yet the production was hampered by a low budget (00,000), star Robert Ryan's untimely bout with pneumonia, and 'personal problems' originating with de Toth at the time of the film's shoot. Whatever issues de Toth was working out at the time, his call to use black-and-white was the right one; Russell Harlan's monochromatic cinematography properly makes the town look bleak and desolate, perfectly in keeping with the pessimistic tone of Yordan's screenplay.

When it came to portraying individuals desperately trying to hide the reservoir of animosity and rage dwelling inside them, Robert Ryan has no peer. Many of his best remembered screen turns involve playing men eaten away by hate and prejudice, from murder suspect Sergeant Montgomery in Crossfire (1947) to Bad Day at Black Rock's Reno Smith, the individual who rules that tiny whistle stop with an iron fist. Ryan got to play the good guy on occasion (like in the 1949 boxing classic The Set-Up), but a lot of those 'heroic' roles were tempered with much ambiguity, and his Blaise Starrett is a good example. Starrett is a bitter and remote man; he comes across as a bit of a jerk in the opening scenes but when more of his history is laid bare -- he and Dan, among many men, were responsible for making the tiny burg of Bitters (ironically named) a fit place for women and children, as the Western cliche goes -- his hardness is perfectly justified. It is he who volunteers to take Bruhn and his men through the mountains, even though he knows there's not much of a chance anyone will come back alive ('I'm not doing anything special...just taking some bad men out of a good town.').

The character of Captain Jack Bruhn seems at times as if he sprung forth from one of the movie Westerns directed by Budd Boetticher. Bruhn, we learn in the course of the film's events, was a decorated Cavalry officer whose single mistake during a raid on a Mormon town cost him his career. While a strict disciplinarian, Bruhn is not without his human side; for example, he allows the youngest of his gang (played by David Nelson) to return to Bitters when one of his men loses his horse as Starrett guides the outlaws through a desolate mountain pass to escape the pursuing soldiers. Bruhn is played by Burl Ives, and it's definitely out of his wheelhouse (though Ives had played menaces before in Cat on a Hot Tin Roof and The Big Country, for which he won a Best Supporting Actor Oscar); it's fascinating watching the man who entertains us every year narrating the story of a red-nosed reindeer playing a despicable heavy.

Tina Louise is reunited with Ryan (they had previously appeared in God's Little Acre) as the woman torn between her love for Starrett and her devotion to her husband. Day of the Outlaw is crammed with marvelous turns from character veterans like Nehemiah Persoff, Jack Lambert, Frank DeKova (playing a half-breed worlds away from the comical Hekawi chief of F Troop), Elisha Cook, Jr. and Dabbs Greer. I've always found it interesting that, at the same time Ozzie and Harriet's son David played young outlaw Gene in this film, his brother Ricky was also appearing in a shoot-'em-up, namely the 1959 classic Rio Bravo. (And this might not be a popular thing to say...but I think David out acts his brother.)

Released to DVD in 2008 by MGM/UA, Day of the Outlaw has also been available in compilation sets (usually paired with 1968's Hour of the Gun and 1971's Lawman) but has just been re-released as a single disc through Timeless Media Group/Shout! Factory. Outlaw received a lot of negative reviews when it first hit theaters in 1959, but classic movie fans have come to embrace this neglected gem as a movie well worth the viewing experience.