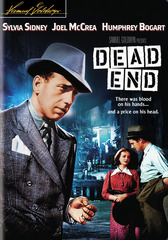 Known as one of Hollywood's most prolific movie directors, William Wyler had a career that began in the '20s and ended in the '70s. He was a favorite of the Academy and won no less than three Best Director Oscar for his tremendous work on Mrs. Miniver, The Best Years of Our Lives and Ben-Hur. Today, Wyler is mainly remembered for Ben-Hur, but his versatility as a movie director allowed him to direct this trio, but also many masterpieces in other genres.

Today, we'll explore a Wyler film with a smaller budget that deserves more recognition: Dead End. Released in 1937, Dead End is an adaptation of Sidney Kingsley's Broadway play of the same name. The screenplay is written by Lillian Hellman (who also wrote the screenplay for Wyler's The Little Foxes) with Samuel Goldwyn producing.

Dead End takes place in New-York city at the border of the East River. On the left, there are the rich people living in newly built luxury buildings; on the right, there are the poor living in deteriorated houses. On the slum side the Dead End Kids: Dippy, Angel, Spit, TB, Milty and their leader Tommy occupy the streets. Tommy's sister, Drina (Sylvia Sidney) is discouraged by her miserable life, and is afraid Tommy might become a criminal later. It doesn't help when 'Baby Face' Martin (Humphrey Bogart) and his friend Hunk (Allen Jenkins) come back to their hometown to visit Martin's mother that he hasn't seen in ten years, as well as his girlfriend Francey (Claire Trevor).

Baby Face Martin is a criminal who's killed eight people and encourages Tommy to pursue a criminal life. Dave Connell (Joel McCrea) is here to watch Baby Face Martin and make sure he won't commit any significant crimes. Drina loves Dave, but his attention seems to be kept by the rich Kay Burton (Wendy Barrie).

Dead End makes us realizes that Hollywood movies aren't always glamorous. Like with Sullivan's Travels (also starring McCrea) it shows us what real life is, a sentiment expressed by its wonderful acting performances starting with the underrated Sylvia Sidney. Sidney certainly was able to play emotional ones. There's something so honest about her performance, which matches the mood of the film perfectly.

It's the same with Joel McCrea. We can see he is an actor with no pretension. His character puts equilibrium to the film's heavy atmosphere.

The Dead End kids are a bunch without fear or pity. Thanks to them and their strong performances, we realize kids can be scary too. However, producer Samuel Goldwyn regretted hiring them for the movie, as they behaved badly on the set and damaged material.

The rest of the cast is ace too, especially Claire Trevor and Marjorie Main. Claire appears on screen for less than five minutes, but she was brilliant enough to receive an Oscar nomination for Best Supporting Actress. Marjorie Main appears in a brief cameo as well, but is unforgettable in her terribly heartbreaking scene with Humphrey Bogart.

It's not surprising Dead End was nominated for Best Cinematography and Best Art Direction because it is quite impressive visually. The film noir lighting goes perfectly with the film's atmosphere. The night scenes are the most visually impressive, especially when Joel McCrea and Humphrey Bogart chase each other on the roofs of New York.

William Wyler wanted to film on location in New York City, but Goldwyn wanted it made in a studio. Even if that's the case, we feel we are in New York. The illusion is perfect, especially with aerial shots at the beginning and the end of the film viewing the East River.

Lillian Hellman wasn't nominated for an Oscar, but she does a strong job. She also wrote for the stage, so it's no wonder she was a great choice for the adaptation of Sidney Kingsley's play.

Dead End was declared one of the ten best films of 1937 by Film Daily. Doesn't it make you want to see it? Because if you do you won't regret it, I'm sure!