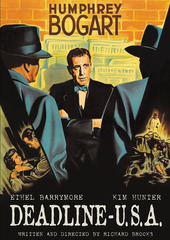 In the bustling newsroom offices of The Day, a major metropolitan newspaper, managing editor Ed Hutcheson (Humphrey Bogart) is sandbagged by an AP wire report announcing the paper will be sold to a competing tabloid by the heirs of The Day's founder, John Garrison. Garrison's widow Margaret (Ethel Barrymore) and her daughters Alice (Fay Baker) and Katharine (Joyce Mackenzie) confirm the sale in a later conference with Hutcheson, and upon learning that they'll have to be looking for new jobs the paper's staff gather at a local watering hole for a 'wake' to honor the death of The Day.

Despite this grim news, Hutcheson has a paper to get out before the sale is completed, and a possible course of salvation lies in an incident involving Day reporter George Burrows (Warren Stevens). Burrows receives a hot tip concerning the activities of one Tomas Rienzi (Martin Gabel), a 'respectable' businessman suspected of racketeering. A State Senate committee hasn't been able to pin anything on Rienzi, but Burrows is certain his information will pan out, and he's able to convince Hutcheson to give him an extra three days with the story. Burrows' muckraking clearly touches a nerve, because he's the recipient of a proper pummeling by goons in Rienzi's employ; he's hospitalized and is in danger of losing an eye as a result of the fracas.

This turn of events lights a fire under Hutcheson: he directs his staff to go at Rienzi with both guns, figuring The Day has nothing left to lose. Ed is also counting on the demise of The Day to repair relations with his ex-wife Nora (Kim Hunter); she plays second fiddle all these years to his real love -- the newspaper.

The release of Deadline U.S.A. (1952) is welcomed by classic film fans. This elusive title is one of Humphrey Bogart's best movies, and a firm favorite of folks who either worked on a newspaper or continue to do so.

Deadline approaches the subject of journalism and newspapers with a healthy mix of both idealism and cynicism, particularly the latter part. Its plot hardly seems dated at a time when newspapers are frequently sold to eliminate competition and ensure that those seeking information have limited choices where the media is concerned. (Any similarity between the activities of an Australian tabloid mogul and his acquisition of periodicals like The New York Post and The Wall Street Journal is purely coincidental.)

Deadline's idealism can be expressed in a famous quote attributed to humorist Finley Peter Dunne: the job of a newspaper is to 'comfort the afflicted and afflict the comfortable.' This sentiment is expressed in a scene in which a just-graduated journalism student (played by future 20th Century-Fox television department head William Self) approaches Bogart's Hutcheson about a job on The Day (apparently Bill didn't get the memo that the paper will be closing its doors soon).

Bogie asks the greenhorn if he knows why journalism is referred to as a 'profession,' and when the student's answer proves unsatisfactory, he explains 'A profession is a performance for the public good. That's why newspaper work is a profession.' Hutcheson winds up hiring the grad (he'll work the 'rewrite desk, lobster shift') and gives him some advice that will stay with you long after you've popped the Blu-ray out the player: 'About this wanting to be a reporter, don't ever change your mind. It may not be the oldest profession, but it's the best.'

Director-writer Richard Brooks was no stranger to working with Humphrey Bogart: he wrote the screenplay for one of Bogie's most successful films, 1948's Key Largo (the last of four pictures the actor made with wife Lauren Bacall). The inspiration for the fictional paper in the film appears to have come from two defunct periodicals: The New York World (which said adios in 1931 after the sons of editor Joseph Pulitzer elected to close the paper) and The New York Sun (folded in 1950). Benjamin Day was the longtime editor of the latter publication, and so the paper in Deadline is named in his honor (there is an actual newspaper known as The Day in New London, Connecticut).

20th Century-Fox lobbied Brooks hard to either cast Gregory Peck or Richard Widmark (both on the studio's payroll) in the part that ultimately went to Bogart, but Bogie was Brooks' only choice from the get-go. The interactions between the two men weren't quite as pleasant as their association on Largo, however -- something Brooks attributed to both the actor's declining health and the exhausting shoot that was Bogart's previous gig, The African Queen (1951). An oft-told anecdote involving Bogar's stubborn refusal to do a scene the way director Brooks wanted it resulted in Ethel Barrymore addressing his star with 'Humphrey, will you...do it!'

'Why should I?' Bogart snapped at her. A weary Ethel replied: 'Because, Humphrey...the Swiss have no navy.' This reduced Bogie to helpless laughter, and he acquiesced to Brooks' demands. I know I'm on record as being a Bogart partisan, but this is one of my favorite performances: a dedicated man who only has one more fight left in him and makes it his best. (Interestingly, this is one of those rare films where the chain-smoking Bogie doesn't light a cigarette: his character's steeliness stems from his buying his ink by the barrel, and that he truly believes in the nobility of his profession.)

Barrymore gives a sensational performance as Margaret Garrison, and it is she who fares better in this film than Kim Hunter, who has a rather thankless role as Bogie's estranged wife. But the top female acting honors go to Audrey Christie as a reporter identified as 'Willabrandt;' her speech during the newspaper's 'wake' scene is just wonderful: 'I gave it the best fourteen years of my life...and what have I got to show for it, huh? Eighty-one dollars in the bank...two dead husbands and...two or three kids I always wanted, but never had...I've covered everything from electrocutions to love nest brawls...I've got fallen arches, unfixed teeth and...you wanna know something? I...I never saw Paris...but I wouldn't change those years... (Choked with emotion) Not for anything in this world!'

Christie is just one of the many fantastic character actors in Deadline. I have an affinity for this film because a number of old-time radio veterans who dot the cast, including Ed Begley (as Bogie's right-hand-man), Barton Yarborough (his cinematic swan song), Parley Baer, Willis Bouchey, Joe DeSantis, Lawrence Dobkin, Paul Stewart, Jim Backus (in a fairly straight role as a reporter -- though he has moments of levity), Dabbs Greer, and Tudor Owen.

In some ways, Deadline U.S.A. is a more serious take on His Girl Friday (1940): you have a Rosalind Russell-like reporter in Christie's character; Bogie very much wants to reconcile with his ex-wife (his competition is the Ralph Bellamy-like Phillip Terry) ; and the movie's ending might remind you of Cary Grant's assertion that newspapers are protected by a 'higher power.' I've yet to meet anyone from the world of journalism who fails to confirm that Deadline is one of the most realistic films to center on newspapers, but it's perfect fare for anyone who hasn't carried a notebook and pencil as well.