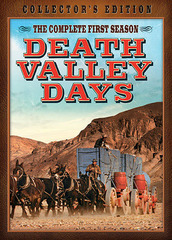 It's All in a Day's Work: Death Valley Days, Season 1

With eighteen seasons and well over 500 episodes, Death Valley Days is one of the longest-running television programs never to receive a legitimate season set on DVD...until now! Through its Timeless label, Shout Factory has brought the first season of this half-hour Western anthology in a 3-disc set containing all eighteen half-hour episodes.

Death Valley Days was a popular radio program for 15 years, airing in first-run television syndication from 1952 to 1970. Reruns stuck around into the 1970s in various incarnations, sometimes re-titled and repackaged with various themes, but the show was largely absent from television for years, resurfacing on cable in 2015 (it seems reasonable to assume that deal helped make this DVD release a reality, possibly even funding restoration work). Rhino issued several VHS tapes in the 1980s, but the only other home video release I know of is on Film Chest's '50s TV Classics, which included 3 episodes (one of which, 'Sego Lillies,' is in this first season).

After such prolonged lack of exposure in the public eye, if Death Valley Days is remembered by any but the most ardent Western fans, it's probably for its sponsor -- 20 Mule Team Borax -- or for one of its on-screen hosts, Ronald Reagan. (Reagan only lasted one year (1965-1966) before ditching the show. Granted, he had a good excuse: He became the governor of California.) The various tales of season one are narrated by his predecessor Stanley Andrews, billed as 'The Old Ranger,' and Reagan was followed by Robert Taylor and Dale Robertson.

Several aspects of the production indicate the series is slanted more towards juveniles. The opening titles appear in a cartoonish font, and the Ranger comes off as an amiable, grandfatherly narrator. Indeed, Death Valley Days' plots don't offer the complexity of later 'adult' Westerns like Gunsmoke or fellow anthology Zane Grey Theater, but then, this is 1952. The show is more sophisticated than contemporaries like The Cisco Kid and The Lone Ranger, touching on themes like death, 'dance hall ladies,' and other topics common in TV Westerns. At the same time, Days is less violent than other early examples of the genre, focusing on the travails of pioneers and the everyday lives of early settlers than on gunslingers and six-shooters.

The anthology format ensures a wide variety of faces from episode to episode, and as in any significant series from the era, TV buffs will see plenty of familiar performers. However, Death Valley Days is not at all driven by the guest stars, but by the stories; the notable actors here are among the likes of Jock Mahoney, Phyllis Coates, Percy Helton, Andy Clyde, and Lyle Talbot. Some, like Gail Davis and House Peters Jr., appear more than once within this batch of episodes.

While the on-camera cast changed each week, much of the personnel behind it remained constant. All programs in this collection feature the same credited director, Stuart McGowen; and more remarkably, the same screenwriter, Ruth Woodman. It's possible many of these screenplays were adapted from the radio series, but still, Woodman's output as the series' primary writer over eighteen seasons is staggering. Woodman is said to have made annual trips to California to gather material, determined to maintain high standards of veracity in her scripts. At the beginning of each episode, The Old Ranger tells us we are seeing, 'True stories, mind you -- I can vouch for that.'

This commitment to realism grounds the narratives as the show avoids some of the more outlandish elements of early television. Many storylines are familiar to Western aficionados -- travelers encounter severe hardships on their journey West, city slickers struggle to adjust to frontier surroundings -- but the show includes enough details to make the circumstances vivid. The premier installment, 'How Death Valley Got Its Name,' depicts starvation, including children in dire jeopardy and a woman makes an intense speech about the horrors they're experiencing. In 'The Lost Pegleg Mine,' we see how a crusty prospector becomes 'Pegleg' - it involves self-surgery - and though we don't actually see the act, the setup and reaction of his companions evokes enough.

Overall, the series is not a grim one, though. 'The Rival Hash Houses' is a good example of the lighthearted episodes this anthology includes. The episode's an amusing look at what happens when a restaurant owner, played by the great Gordon Jones, A.K.A. Mike the Cop from The Abbott and Costello Show, receives competition from a widow from Maryland played by Jane Frazee. In 'The Little Bullfrog Nugget,' a man tries winning a waitress' hand in marriage with...eggs? Furthermore, the stories end up shining light on even the darker aspects of the Old West, usually culminating in positive endings. We usually see Andrews only in the opening segment, but we practically hear him beam as he provides a closing summary explaining how things turned out for everyone. The overriding message of the show is that while things were tough, these people stuck it out and helped build America.

Perhaps the biggest star of Death Valley Days is neither the Ranger, nor anyone in the ever-changing cast, or even Woodman; it may well be the Valley itself. This series makes extensive use of location shooting, much of it in the actual Death Valley area in California, and the great outdoors looks quite impressive in glorious black and white.

These first-season episodes look and sound very good, and each clock in at about 25 to 26 minutes or so, suggesting complete, unaltered prints. On the aforementioned Film Chest release, 'Sego Lillies' looks very much like an old, beat-up print, but on this set it is crisp with good contrast and little sign of wear. If this one example is indicative, someone has done great work.

There are only a couple of things missing from this set. Given the close identification of the series with its sponsor, I would have enjoyed seeing some original commercials and promotional material. (An early episode, 'She Burns Green,' does dramatize the discovery of borax.) Also, it's a shame there is no bonus content, especially considering the program's lengthy and interesting production history. Its unique status as a long-running syndicated Western, one with a wide array of hosts, guest stars, and stories, merits some supplemental information.

This set is a winner overall, though -- an attractive presentation of a series neglected too long by television and by home video. Western enthusiasts and fans of solid, upbeat storytelling with frequent location shooting will enjoy Death Valley Days and will surely join me in hoping Timeless continues releasing complete seasons in chronological order.

Rick Brooks is the proprietor of Cultureshark, a blog in which he uses an often irreverent approach to express his reverence for the classics and the un-classics and the co-host of Battle of the Network Shows, a podcast about 1970s and 1980s TV.