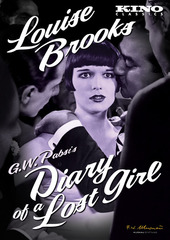 Where's That Been? - Diary of a Lost Girl

'There is no Garbo! There is no Dietrich! There is only Louise Brooks!' So proclaimed Cinematheque Francois founder Henri Langlois in 1953, when the rediscovery of films starring the immortal silent screen siren nicknamed 'Lulu' was just beginning to spread throughout France during the 1950s. Brooks had long been forgotten in her native U.S., having officially bid the movie business a fare-thee-well with the release of a 'Three Mesquiteers' film, Overland Stage Raiders (1938). It was her collaborations with legendary film director Georg Wilhelm Pabst, Pandora's Box (1929) and Diary of a Lost Girl (1929), that would bring Brooks her long-due recognition among the cinematic cognoscenti; both films are considered masterpieces of silent cinema, with Diary somewhat overshadowed by the prestige awarded Pandora.

Diary tells the tale of Thymian Henning (Brooks), the young daughter of a pharmacist (Josef Rovensky) who has dismissed his housekeeper, Elisabeth (Sybille Schmitz), on the same day of Thymian's confirmation. Thymian doesn't know the reason for Elisabeth's departure (the audience has been clued in to the fact that her father had an illicit relationship with the housekeeper that results in Elisabeth's suicide), but Meinert (Fritz Rasp), her father's assistant, helpfully agrees to explain the events to her later that evening. Instead, he takes advantage of Thymian, and she gives birth to his illegitimate child.

Thymian's family learn the identity of the father from her diary (a confirmation present), and insist she marry Meinert; the girl steadfastly refuses, as she does not love him. So her father's new housekeeper, Meta (Franziska Kinz), arranges for the child to be left with a midwife and for Thymian to be sent to a reformatory for 'lost girls,' administrated by a sinister couple (Valeska Gert, Andrews Englemann). Salvation for Thymian comes in the form of her friend Count Nicolas Osdorff (Andre Roanne); a 'cast-off' boy (he's been disinherited by his wealthy uncle), Osdorff helps Thymian and her friend Erika (Edith Meinhard) escape the strict discipline of their oppressive environs.

Offered a place to stay by Erika, Thymian begs off -- she wants to see her child, but learns from the midwife that the child is dead (Thymian passes a man carrying a small coffin on her way upstairs to the midwife's apartment). What's worse, Thymian is no longer welcome in the Henning household -- Meta has married her father, and refuses to allow her entrance out of jealousy. Penniless and with no other options, Thymian meets up at the address Erika gave her earlier and learns to her dismay that it's a brothel. Thymian settles into her new career vocation, unware of the twists and turns that await her in later life.

Louise Brooks made her film debut in 1925's The Street of Forgotten Men for Paramount Pictures, and not long after had supporting roles in such films as Love 'Em and Leave 'Em (1926; one of my favorites, with Louise as an unrepentant vamp), The Show-Off (1926), and It's the Old Army Game (1926; starring W.C. Fields). Sadly, most of Brooks' silent features no longer survive (Evening Clothes, Rolled Stockings); she appeared in less than two dozen movies, so it's often a bitter pill to swallow for fans of her work. For those willing to track down prints of her vehicles in online Mom-and-Pop video establishments, the rewards are boundless; one such film, A Girl in Every Port (1928), attracted the attention of G.W. Pabst and he cast her in the leading role of 'Lulu' in Pandora's Box.

Pandora's Box was not well-received by theatergoers at the time. Its frank depiction of illicit themes and its connection to female liberation outraged German conservatives, who put pressure on local censors to heavily edit, and, in some cases, ban the film. Undeterred, Pabst formed his own production company and set out (with Louise again as his star) to adapt Margarete Bohme's 1905 novel Tagebuch einer Verlorenen. (Bohme's book had been previously filmed in 1918 by Richard Oswald, though that version is believed to be lost.) Diary satirizes the bourgeois hypocrisy of those outraged by Box by presenting Thymian's family (her father, Meta, etc.) as coldly cruel in their sanctimonious ways while the brothel women are depicted as caring, loving individuals who refuse to judge their new 'sister' (the madam seems more like a den mother) and welcome her with open arms. The message of the film is neatly summed up by the remarks made in closing by Nicolas' uncle (Arnold Korff), who has repented for his earlier animosity toward Thymian: 'With a little more love, no one on this earth would ever be lost!'

Like Lulu in Pandora's Box, Diary's Thymian finds freedom in refusing to compromise herself; Pabst shows us that it's imperative for a girl to result to such independence when victimized in a world of cruelty dominated by evil men. The reception to Diary wasn't any more positive as the response to Box; critics and the press were again outraged, and Pabst was forced to shoot an alternate ending for his feature. The U.S. welcome to both movies was pretty much on par with the German response, and the two features also suffered heavily the snip of the censors' scissors. For many years, both Pandora and Diary were not accessible to American audiences but thankfully Brooks' acknowledged masterpieces are available on DVD, as is her third foreign feature, Prix de beaute (1930). (Sadly, her best American film, 1928's Beggars of Life, languishes in limbo.)

Pandora's Box and Diary of a Lost Girl may have added cache to Louise Brooks' cinematic reputation in Europe, but her work with Pabst ultimately cost her a career on the other side of the pond. While living in Germany and working on Pandora, Brooks refused to return to the U.S. to participate in some post-dubbing that would transform The Canary Murder Case (1929) into a talkie...so she was given a pink slip by Paramount. The actress took the dismissal in stride; Louise confessed to friends that by that time she 'hated Hollywood,' and watching a 1931 two-reeler entitled Windy Riley Goes to Hollywood (included on the Diary Kino DVD and directed by William Goodrich -- better known as Roscoe 'Fatty' Arbuckle) you can tell she's quickly becoming bored by the whole moviemaking experience. (Louise also has a small role in 1931's God's Gift to Women, available on MOD DVD.) Louise Brooks would later become a well-respected film critic and chronicler of the movie biz (her writings were collected in 1982's Lulu in Hollywood, one of the best books on cinema ever written), but if you're not acquainted with her luminescent performance in Diary of a Lost Girl, I urge you to do so at your first opportunity.