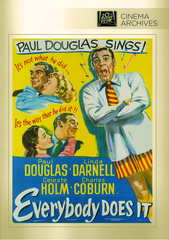 Where's That Been? - Everybody Does It

New York businessman Leonard Borland (Paul Douglas) seems the embodiment of the American Dream: he's the founder of a successful wrecking company, and with his marriage to Doris Blair (Celeste Holm) enjoys an enviable social status that comes from marrying into good family stock. Lately for Len, however, the Dream has turned into a nightmare. His company -- which he owns with partner Mike Craig (Millard Mitchell) -- is in a bit of a financial pinch (everyone is building, but no one seems to be tearing down), and Doris is longing for a singing career...something Leonard was certain she gave up years ago.

Neither Len nor Doris' father (Charles Coburn) -- affectionately known as 'the Major' -- are convinced Doris can make a go as a singer; the Major's evaluation of her talent goes like this: 'The first time I heard my daughter's voice raised in song I went straight to my club and locked myself in a room for five days without food or drink...without food, anyway.'

With the encouragement of her mother (Lucile Watson) and music professor/voice teacher Hugo (Leon Belasco), Doris readies herself for a recital to be performed before family, friends...and anyone unfortunate to be pressed into buying a ticket by Leonard and Mike. Doris beseeches Leonard to pay a visit to a music critic named Hertz (Aubrey Mather) so that Hertz will be present for the performance (he's been given the wrong date), and he rudely rebuffs Leonard. Professional singer Cecil Carver (Linda Darnell), visiting Hertz at the time Leonard stops by, is curious enough to attend Doris' recital (prompting many murmurs from those in the crowd who know her work) which goes off without a hitch.

Leonard believes having demonstrated that she's not awful, Doris will put away any silly notions of continuing her vocal career. But she's just more determined that she's destined for greatness, and Cecil invites Leonard to her apartment to give him her professional opinion: Doris isn't terrible. but she's never going to rise above being a talented amateur.

Cecil asks Leonard for assistance with an old WW2 song she's scheduled to perform at a benefit later that evening (Len knows the lyrics because it was popular with the Seabees), and that's when she discovers to her surprise that Borland possesses an amazing baritone voice -- one that can even shatter glass! The two of them then scheme to scotch Doris' aspirations once and for all by promoting Leonard's talent -- singing as 'Logan Bennett.'

Linda Darnell and Paul Douglas' engaging marital chemistry in A Letter to Three Wives (1949) -- which was the former radio announcer's debut feature film -- prompted 20th Century Fox to look for another vehicle for the two stars, and they didn't have to look too far: they merely dusted off the script from a previous 1939 Fox film, Wife, Husband and Friend.

That film was written by Nunnally Johnson (adapted from a story by James M. Cain of Double Indemnity fame), and Johnson merely re-worked the material (he changed very little of the original script) to fit the most unlikely of leading men (Paul Douglas, in his third film after It Happens Every Spring) for what was to be called Her Master's Voice and Strange Bedfellows before they eventually decided on Everybody Does It. (I got a quizzical look from ClassicFlix's associate editor when I suggested this movie for a column, by the way.) Warner Baxter played Douglas' part in the 1939 original, with Loretta Young as his wife and the delightful Binnie Barnes in the Linda Darnell role.

I'm not kidding about Douglas as radio announcer: it's what he did for a living before becoming a Broadway star, playing opposite Judy Holliday in Born Yesterday. Sadly, Broderick Crawford beat Paul out for the film adaptation of that classic but Douglas later worked with Judy in The Solid Gold Cadillac (1956). Douglas was hardly movie star-handsome -- and stories from his co-workers in radio would indicate he could be a bit of a jerk -- but he possessed a charming presence onscreen that later led to high-profile roles in Panic in the Streets (1950), Fourteen Hours (1951), and Angels in the Outfield (1951).

The character of Leonard Borland is quite similar to that of Douglas' Edward L. McKeever in Cadillac: a former working-class guy who's since 'made good' but nevertheless is a bit bewildered by the high-falutin' society in which he now finds himself. He barely tolerates his snooty mother-in-law (delightfully played by Lucile Watson; Douglas jokingly calls her 'Mater') but enjoys the company of The Major, who deals with Watson by imbibing heavily (it's a role Charles Coburn was playing in his sleep by that time).

It's important to note that Leonard dearly loves Doris, and is a bit hesitant about 'one-upping' her with his newly acquired singing career -- particularly when he returns home from being on tour (he's told Doris he's on a business trip for the wrecking company) and learns her performance at a neighborhood theatre was loudly jeered and mocked by those in attendance.

Because my fondness for Celeste Holm is greater than that of my enjoyment of Loretta Young, I've always felt Everybody Does It is that rare example of a remake outshining the original (Wife, Husband and Friend). It's Linda Darnell, however, that really makes Everybody a delight; the positively luminous beauty has one of her best film roles as Cecil and demonstrates a better lip-synching talent than her co-star. (Linda's singing voice was by soprano Helen Spann; Douglas' vocals are provided by baritone Stephen Kemalyan.)

Darnell's 'bad girl' reputation in films actually adds an interesting element to Everybody in that she conveys a slightly naughty romantic interest in Douglas (they share a passionate kiss in the scene in her apartment before Paul finally pulls back). The two stars would make one more film together: the 1951 romantic melodrama The Guy Who Came Back.

All of the elements come together in Everybody Does It: solid direction by Edmund Goulding, and Johnson got an assist on his script from writer-director Mal St. Clair (who was no slouch when it came to movie comedy).

The supporting cast is most engaging as well, particularly John Hoyt as a Clifton Webb-like maestro (asked by Watson if he'd like to be introduced to some party guests Hoyt snarls 'I would rather be shot from a cannon'), Millard Mitchell as Douglas' business partner and the ubiquitous George Tobias as Linda and Paul's promoter. Some of the physical comedy might make modern audiences wince a little (the closing gag with Mitchell and wife Ruth Gillette is a bit too much to take) but as a whole the movie remains a fitfully funny farce and definitely worth a rental.