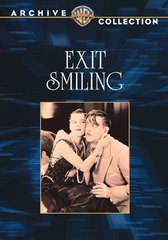 Where's That Been? - Exit Smiling

Before I sat down with the Warner Archive release of the 1926 Beatrice Lillie comedy Exit Smiling, my only prior contact with the legendary Tony Award-winning comedienne was her appearance on a February 3, 1946 radio broadcast of The Fred Allen Show. Allen invites Bea to participate in an Oklahoma! parody entitled 'Piccadilly,' and no sooner do they begin the opening number when Lillie stops the proceedings to point out that Fred is stealing from Oscar Hammerstein and Richard Rodgers' Broadway smash.

'Bea,' explains Fred, 'Oscar Hammerstein and Richard Rogers have five hit shows, all going now. All day long, they do nothing but count money...they never look up. How will they know that one of their little shows is missing?' The satirical comedian invited her back for an encore of the 'Piccadilly' sketch on a March 16, 1947 broadcast, and she appeared a third time (in a show that is not in circulation) on January 18, 1948. For a performer who was better known for her Broadway and London stage revues - Lillie only made a handful of movies, so she was not necessarily a 'big name' to Fred's audience - this was quite a compliment indeed.

In Exit Smiling, Bea Lillie plays Violet - a star struck acting novice who's employed by the Orlando Wainwright repertory company as a domestic drudge...though she is occasionally called upon to play small roles (a title card informs us that she played 'nothing' in Much Ado About Nothing) when needed. The Wainwright players are currently touring with a hokey mellerdrammer entitled Flaming Women, and when Olga (Doris Lloyd), the star of the play, is running late one evening, Violet is giddy because Wainwright (DeWitt Jennings) has okayed her taking her place in the performance. (Olga returns in time, however, dashing Violet's expectations to the ground.)


As the Wainwright troupe is making its way to its next booking - they even have their own personal railroad car to transport the players, costume, scenery, etc. - Violet meets a young man named Jimmy Marsh (Jack Pickford), who's just left his home town of East Farnham. Violet convinces Jimmy that she's the star of Flaming Women...an illusion that dissipates when he later sees her doing the cast's laundry, prompting her to come clean (sorry about that). Jimmy is looking for work, and so Violet convinces Wainwright to hire Jimmy when the actor essaying the juvenile lead in Women is fired; Jimmy impresses Wainwright so much that he is soon promoted to playing the part of the play's villain.

When the troupe doubles back to play a date in East Farnham, however, the audience soon gets the full story on why young Marsh was in such a hurry to shake the dust off his feet of that burg. The bank's vice president, Jesse Watson (Harry Myers), framed cashier Jimmy for embezzling ,000 - money that went to paying a debt Watson owed to racketeer Tod Powell (Tenen Holtz). Powell is shaking Watson down for an additional grand, and threatens to tell the bank's president (Charles K. French) of Watson's involvement in the theft. To prove Jimmy's innocence, Violet must first play his part (the villain) in that evening's performance and then her dream role of the 'vamp' for Watson in this hilarious (and heartbreakingly bittersweet) comedy-drama.

Exit Smiling is a revelation for those who might not find silent comedy their particular cup of tea. There's certainly some physical comedy (executed to often deadpan perfection by its star) and a dash of satire (the play within the film, Flaming Women, is a hysterical hoot) but most of what takes place comes across as refreshingly natural - there's no exaggeration or none of the eye-rolling slapstick that people often associate with the great silent clowns. The direction of the film was expertly handled by Sam Taylor (who co-wrote the screenplay with Tim Whelan, based on a story by Marc Connelly), a name movie buffs will associate as one of Harold Lloyd's contemporaries (he co-directed such Lloyd classics as Safety Last! and The Freshman). Smiling reminds me a lot of a Lloyd comedy, only from the distaff side - Violet is a resourceful 'go-getter' type who refuses to let anything get in her way of being a great actress...and when she does encounter an obstacle, she determinedly works around or incorporates the problem, refusing to be stymied.

A good example of the subtlety in Exit Smiling is a funny sequence in which Jimmy is auditioning for the company despite his lack of acting experience. Violet assists him by suggesting a 'death scene' from another play, and as the two of them perform for Wainwright the manager suggests that Jimmy put a bit more emotion into his efforts by summoning up some tears. Jimmy complies, and Wainwright and the rest of the troupe members are astonished by his talent. A close-up reveals that Violet is still helping him out by holding a raw onion in her hand...something ironically commented upon by Olga, who remarks via title card: 'That kid certainly knows his onions!'

Exit Smiling also served as the feature film debut of character great Franklin Pangborn, who demonstrates here that one need not hear his familiar fussy tones of exasperation in order for him to get big laughs - for starters, he plays Flaming Women's 'hero'...and even then the filmmakers emphasize the elements of what later became his 'nance' character with a title card that reads: 'This nervous tension will positively slay me!' (Pangborn also features in a sublime gag where Lillie's Violet mistakenly climbs into his train berth.  'How dare you!  I've never given you any encouragement!')

Exit Smiling was Bea Lillie's only silent comedy. The movie did quite well at the box office, but it was Bea herself who decided not to continue that portion of her career - she didn't particularly enjoy making movies due to their lack of a live audience. The woman who would win a Tony for her 1952 London/Broadway revue An Evening with Beatrice Lillie would appear in a few sound shorts and features, notably Dr. Rhythm (1938), On Approval (1944) and Thoroughly Modern Mille (1967 - star Julie Andrews later noted that the onslaught of Alzheimer's interfered with Lillie's performance in that she would forget her lines and become confused while on the set), but later observed in her 1973 autobiography: 'For the longest time I refused to see Exit Smiling. It's an awful feeling to sit watching yourself, knowing there's nothing you can do about it.' Lillie was considered at one time by her many admirers to be 'the funniest woman in the world'...and in Exit Smiling, she removes all doubt.