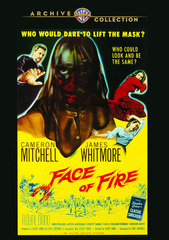 Where's That Been? - Face of Fire

In Whilomville, New York, circa 1898, happy-go-lucky 'Monk' Johnson (James Whitmore) is employed as a groom by Dr. Ned Trescott (Cameron Mitchell). It's a job granting Monk a generous amount of free time, which he often spends at the fishing hole with Trescott's son Jimmie (Miko Oscard), setting a fine example as a mentor in general. Monk is an individual who, when the light hits him from a certain direction, is fairly handsome, and as one of Whilomville's eligible bachelors there's certainly no shortage of infatuated young women who long to be Mrs. Johnson. But that honor is going to Monk's fiancee, Bella Kovac (Jill Donohue), whose mother (Hjordis Petterson) finds Bella's choice of beau charming as well.

On his way home from the Kovacs, Monk observes that nearly the entire town has gathered around the Trescott home. The reason is because the domicile is a raging inferno, as firemen struggle to put the conflagration out. Monk learns Jimmie is still inside the house, and bravely goes in to rescue him...but during his retreat, he slips and falls in Trescott's laboratory and winds up doused with flammable chemicals. Jimmie is saved, but Monk is not so lucky -- he receives serious facial burns leaving him hideously disfigured.

Despite his heroic rescue of Jimmie, many representatives of Whilomville believe it might have been better if Monk had perished in the fire. Because of his disfigurement, he's now the town pariah, and when he leaves the home of Al Williams (Richard Erdman) and family (who've been entrusted with Monk's care), he winds up frightening several of the town's inhabitants with his very appearance. A mob of men gather in pursuit, and a body hit by a speeding train is eventually identified as the unfortunate Monk. But is it really Monk?

Face of Fire (1959) -- newly released to DVD by the Warner Archive in March -- is a feature film based on the novella 'The Monster' by author Stephen Crane. Crane is unquestionably best known for his 1895 classic The Red Badge of Courage, which was brought to the silver screen in 1951 in a production directed by John Huston. Lamentably, MGM tinkered heavily with Courage while Huston was hard at work preparing The African Queen, and the end result was a truncated mess the director was unable to rescue (though even in its present form, it's still a first-rate film). Courage has kind of eclipsed Crane's other works, but he is held in high regard in the literary community for his many short stories, not to mention contributions to poetry and journalism. 'The Monster' was the first of fourteen stories the author composed about the fictional berg of Whilomville (loosely based on Port Jervis, NY, where the young Crane resided as a child). In fact, the remaining thirteen tales would be gathered for a book anthology published in 1900, Whilomville Stories.

Sadly, in the translation from paper to celluloid, the most interesting aspect of 'The Monster' is left by the wayside, no doubt due to a skittishness about the potential controversy present in the subject matter. The Johnson character in the novella (his first name is Henry) is African-American, and the tragic events which befall him serve as an allegory for racial prejudice and its effects on a small-town community. The themes of mob mentality and fear of the unknown are still present in the sanitized film version, but Face of Fire might have packed more of a wallop -- and escaped both its dismal box office take and subsequent lolling in obscurity -- if the pungent content of the original had been retained.

Face of Fire was co-written and directed by Albert Band; Band's fellow scripter, Louis Garfinkle, also served with Albert as one of the producers. Band's respect for Stephen Crane's work stretches all the way back to the production of The Red Badge of Courage -- it was Albert who was the actual adapter of the book, but was rewarded with a job on Courage as a production assistant (uncredited, of course). A veteran in the filmmaking trenches, Albert is perhaps best known for founding the independent Empire Pictures in the mid-1980s with his son Charles (Charles would later form Full Moon Pictures when Empire went belly-up). Since most of those movies fall out of the ClassicFlix timeline, you could entertain yourself with some of Albert Band's earlier films beginning with The Young Guns (1956). It was I Bury the Living (1958), a low-budget shocker starring future Have Gun, Will Travel hero Richard Boone, that bestowed upon Band his reputation as a director-producer who could make films cheaply and effectively. Face of Fire, an Allied Artists production, saved a good deal of money in its production costs by filming in Sweden with the blessing of the Swedish film industry (which explains the large number of Swedish performers in the cast).

The Swedish economizing enabled Albert Band to hire an impressive cast for Face of Fire. Monk Johnson is played by James Whitmore, who's able to work wonders with what is an admittedly difficult part, and though I'm not quite as sold on Cameron Mitchell's performance as Trescott as other reviewers, it is heartening to see the actor transcend his usual screen villainy in the role of the hero. (For those of you curious to check out Mitchell at his meanest, I recommend Garden of Evil and Hell and High Water only because the incredible No Down Payment is not available on DVD as of this writing.) I was most impressed with some of the fine character performers in the film: Robert F. Simon shines as a sympathetic judge who starts out as Mitchell's ally, then switches sides only out of concern for his friend's well-being. Top acting honors go to Lois 'Miss Moneypenny' Maxwell as a cold-blooded woman out for Whitmore's scalp after he turns up at a children's birthday party and frightens her young daughter out of her wits. Her work is complemented by one of my favorite character actors, Royal Dano, playing Maxwell's husband, and whose only defense against his spouse's shrill behavior is a world-weary sarcasm.

Face of Fire might have performed better in movie theaters had the production not been promoted as a Frankenstein-style horror film in the vein of Band's previous I Bury the Living; the posters screamed 'Would you dare to lift the mask?' without realizing that the story in Fire focuses more on the ugliness of the townspeople as opposed to the unfortunate Monk Johnson. The unfortunate ad campaign disguises a fascinating social document that should be seen at one's earliest opportunity, particularly in light of the famous observation from Pogo cartoonist Walt Kelly: 'We have met the enemy, and they is us.'