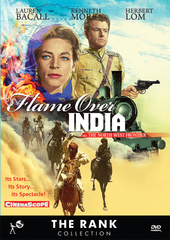 Where's That Been? - Flame Over India (North West Frontier)

India, 1905. As his palace is besieged by Muslim rebels, a Hindu maharajah asks a British Army Captain (Kenneth More) named Scott to take his son, Prince Kishan (Govind Raja Ross), to safety in Delhi. Kishan is only six years old, but is also the future leader of the country…so Scott, along with the young boy’s governess, Catherine Wyatt (Lauren Bacall), manages to get as far as Haserabad as the rebels burn the palace to the ground. Scott arrives to learn that the train scheduled to take them on the remaining leg of their journey has left the city, filled with Hindu refugees. It looks grim: those that remain would appear to be at the mercy of rebels who have seized control of the outer wall and gate near the railyard; the Governor, Sir John Windham (Ian Hunter), briefs Scott that military reinforcements are on the way…but all are in agreement that Haserabad is a most precarious place for the young ruler to be.

There may be a way out. An ancient shunting engine, the Empress of India (its engineer lovingly refers to it as “Victoria”), just might be able to spirit Scott, Catherine and the Prince to nearby Kalapur. Accompanying this trio will be a disparate group of passengers: the Governor’s wife, Lady Windham (Ursula Jeans); arms dealer Peters (Eugene Deckers), British expatriate Bridie (Wilfrid Hyde-White) and Dutch-Indonesian journalist Van Lyden (Herbert Lom). Gupta (I. S. Johar), the engineer, and two Indian NCO’s are also along for the ride – a 300-mile trek across wilderness in which danger lurks at every turn.

If the title North West Frontier suggests a Western…well, it’s not far from it. The original story was penned by Will Price (husband of Maureen O’Hara) and Patrick Ford (son of director John), with a screenplay from Frank S. Nugent (responsible for such John Ford-directed films as Fort Apache, 3 Godfathers and She Wore a Yellow Ribbon) and adapted by Robin Estridge. There are striking parallels between Frontier and Stagecoach (1939), notably the idea of distinct individuals at the mercy of hostile elements and how they must rely on their mettle and ingenuity (not to mention pooling their resources) to outwit and overcome same. In one sequence in the film, the male passengers work together to replace a section of rail sabotaged by some of the rebels by replacing it with some of the track from behind the train. Later in the story, everyone works together as a bucket brigade to refill the “Victoria” with water since the station has also been incapacitated.

But much of what takes place in North West Frontier is also present in an earlier film directed by J. Lee Thompson, a 1958 war movie entitled Ice Cold in Alex (retitled Desert Attack for U.S. release) that features a petrifying journey across unfriendly territory (involving an ambulance and Nazi patrols). Thompson was just making a name for himself helming vehicles like Tiger Bay (1959) when Frontier was released in the U.S. as Flame Over India (it went by a third name, Empress of India, for Australian release) and Gregory Peck happened to catch the film. Peck offered Thompson the opportunity to take over for Alexander Mackendrick when production on The Guns of Navarone (1961) stalled, and the success of that film made J. Lee a top Hollywood director (Cape Fear, What a Way to Go!).

Thompson’s pitch-perfect direction on North West Frontier expertly blends colorful characterizations and nail-biting suspense…and throws in a few political ideas for seasoning. The highpoint of the picture is a white-knuckle sequence in which the Victoria’s passengers must navigate a bridge that has been attacked by their enemies: first by crossing a narrow segment of rail with no supports on either side, then having Scott and Gupta maneuver the train over the damaged section. (This was filmed at the Hacho Bridge, situated between Guadahortuna and Alamedilla in Andalucía, Spain. The railway itself is now obsolete — it originally traversed the Northern part of the Sierra Nevadas, between the provinces of Granada and Almeria – but it turns up in several other movies as well.)

Actor More’s Captain Scott seems to have stepped out of a Kipling novel; the typical Army officer devoted both to fair play and orderly British rule (and yet light-hearted enough to sing a few bars of “The Eton Boating Song” at one point in the film). He’s well supported by Lom as a sardonic (and unmistakably sinister) member of the fourth estate who frequently causes friction among the other passengers, and Hyde-White as the epitome of the stiff upper lipped Brit. But Frontier is really a showcase for Lauren Bacall, who gives one of her finest film performances as the resolute and independent Catherine, who doesn’t hold back with her criticism of Windham’s initial handling of the affair when the Prince’s safety is the topic of discussion. “The British never seem to do anything until they’ve had a cup of tea,” Mrs. Wyatt sharply rebukes a British general (Jack Gwillim), “until it’s too late.” She then apologizes for her “American” point-of-view, but hedges with “You must forgive me for speaking my mind. I happen to believe that’s what it’s for.”

Bacall’s character figures in one of the most unforgettable sequences in the film. The Victoria meets up with the original refugee train, and Scott quickly determines that every one of its passengers has been massacred by the rebels. Catherine insists on having a look for herself despite Scott’s warnings; she makes her way through the train coach, death around her at every turn…in miserable heat punctuated by the buzzing of flies and intercut shots of buzzards gathering for what will probably be the early bird special (sorry about that). Finally she returns to the Victoria, cradling an infant in her arms. The mother of the baby concealed it from the murderers by shielding it with her body, and the child is still very much alive. To his credit, Scott later admits that Catherine was right in her decision to check the train.

Bacall later remarked in an interview with Howard Thompson that North West Frontier was “a good little movie…with a stupid title.” She was referring to the U.S. release, Flame Over India, which occasionally turns up in a truncated ninety-minute version on home video; this version has slipped into the public domain. That’s why I cannot recommend strongly enough that you check out the VCI DVD release in its full 130-minute glory; it’s presented in a letterboxed version that captures beautifully the picture’s stunning CinemaScope photography (courtesy of future Oscar-winner Geoffrey Unsworth). All aboard for high adventure!