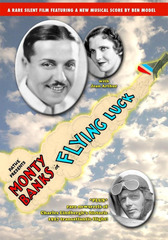 Where's That Been? - Flying Luck

On May 20, 1927, a 25-year-old aviator named Charles Lindbergh skyrocketed to international fame by piloting a single-seat, single-engine plane (The Spirit of St. Louis) from Roosevelt Field in Long Island, N.Y. to Le Bourget Field in Paris, France. Lindbergh was not, as commonly believed, the first person to make a Transatlantic flight (there were eighteen people ahead of him), but he covered nearly twice the distance of the first individuals (Alcock and Brown) to accomplish the feat (close to 3,600 miles), taking 33 1/2 hours to do so. Charlie received the Medal of Honor in recognition of his aviation achievement.

A U.S. Mail pilot before all the accolades and ticker-tape parades, Lindbergh used his notoriety to promote both commercial aviation and Air Mail services -- yet he got additional help in this area from pop culture influences like the movies. Everyone from Charley Chase (Us, a two-reel comedy released in 1927) to Mickey Mouse (the first release planned for the cartoon icon was 1927's Plane Crazy [ultimately released in 1929] even though the 'talking' Steamboat Willie [1928] got the final nod) got in on the flying fad; in fact, the first Best Picture Oscar winner was Wings (1927; which took place during WWI, but still featured magnificent men in their flying machines).

Two months after Lindbergh's flight, the motion picture trade papers announced that comedian Monty Banks would star in a feature film-length comedy entitled An Ace in the Hole. It was eventually released on December 5, 1927 as Flying Luck, and served as Banks' feature film swan song (he headlined a number of features between 1924-27).

Monty, identified in the cast credits as 'The Boy,' idolizes 'Lucky Lindy,' and dreams of being a famous aviator like his hero. His early attempts at flying (he buys and rebuilds a junked airplane in addition to obtaining a book titled 'Ten Easy Lessons by Mail') do not succeed as planned; he winds up crashing through the roof of an Army recruitment center. He's sweet-talked into enlisting (the recruiters assure him it's the easier way to become a pilot) and before you can say 'you'll never get rich' Monty's in the Army now. Chaos ensues when he's mistaken for a foreign dignitary inspecting an Army aviation base, and Banks soon finds himself on the outs with both The Colonel (J.W. Johnston) and The Sergeant (Kewpie Morgan).

Monty also makes the acquaintance of The Colonel's daughter (Jean Arthur); in fact, a mix-up on the bus trip resultes in his acquiring her suitcase by mistake. The two quickly fall in love (movies are magic, ma chere) and Monty gets his chance to make good when a series of mishaps result in his participating in an exercise of 'air polo' (five balloons are set loose, and the first planes -- Army vs. Navy -- to collect the most wins).

Monty Banks -- born Mario Bianchi in Cesena, Italy in 1897 -- made his motion picture debut in 1916, and for a number of years supported many star comedians (notably Roscoe 'Fatty' Arbuckle) before getting his own starring series of short comedies in 1920. In 1924, he transitioned into feature films with entries like Keep Smiling (1925) and Atta Boy (1926). His 1927 feature, Play Safe, is perhaps his best-known: the suspenseful train chase is prominently showcased in the Robert Youngson compilation Days of Thrills and Laughter (1961).

By the time the movies started to talk, Banks' Italian accent dictated his onscreen appearances be few and far between, so he started to shift his participation to behind the camera in movies like The Church Mouse (1934), which he directed and played a small role (as a window washer), and 1938's We're Going to Be Rich. Most of his later forays into moviemaking involved submitting gags and directing; he was allowed to do both (as Montague Banks) in the director's chair of Laurel & Hardy's Great Guns (1941). One of his final onscreen roles before his death in 1950 was a small part in Blood and Sand (1941), where he was billed as William Montague.

Apart from Play Safe's edge-of-your-seat train sequence (you should check this out if you haven't done so) and a stray short or two, my exposure to Monty has been limited. So Flying Luck was a good deal of fun for me; its gags are inventive and title cards amusing -- Banks himself co-wrote the movie's story with Charles Horan (who receives screenplay credit). Herman C. Raymaker, who oversaw many of Banks' short comedies, does solid work as director; exhibiting a splendid sense of timing that helps to put over a lot of the movies' gags in a big way.

There was always something vaguely Chaplinesque about Monty Banks (it might be the dark hair and moustache), and he exhibits an exceptional flair for pantomime. The funniest bit in Luck for me is a sequence where Monty is convinced (thanks to his fellow soldiers, who have been 'giving him the business' since the day he arrived) that The Colonel has hand-picked him to fly in the 'air polo' exercise. Banks' 'pals' have even gone to the trouble in maintaining the deception that he's talking on the telephone to The Big C. By the time Monty's sergeant grabs the phone away from him...The Big C really is on the line, and gives Sarge a proper pranging after being called a 'fathead.'

As Monty watches his sergeant getting a chewing-out from The Colonel via an open window, he mimes pulling a stripe off his uniform (his sergeant is now a private), and finishes with pushing someone into the pokey, then a key being turned in a lock, and finally swallowing it. There are any number of small, rib-tickling moments like this: another gag that made me smile was Monty's bewilderment at being kissed on both cheeks by a French officer. when the officer attempts to repeat this gesture after Monty's heroic aerial antics, Banks gives him as wide a berth as possible.

Monty's leading lady in Flying Luck is a young Jean Arthur, spotted in such silent films as Seven Chances (1925; as the receptionist), but is better known for her starring roles in later comedies as Mr. Deeds Goes to Town (1936), The Talk of the Town (1942), and The More the Merrier (1943). Jean doesn't get a great deal to do in this one, yet even without sound, you can hear her distinctive throaty voice whenever her lips move on screen.

There aren't many Monty Banks comedies on home video, so a round of drinks need to be bought for silent film accompanist/historian Ben Model, whose Undercrank Productions was instrumental in bringing this rare silent feature to DVD in 2014. Flying Luck runs about an hour (and some of the footage appears to be missing, if the occasional gaps in continuity are any indication), with the rest of the disc filled out with 40 minutes of rare newsreel footage of Lindbergh's famous flight (courtesy of preservationist Bruce Lawton, who also provided the transfer of Luck from a vintage 35mm nitrate print) from 'weeklies' Kinograms, the William J. Ganz Company and Pathe News.

Let's be honest: there's a lot more to silent comedy than just 'the big three,' so if you're in need of something new to watch, you're in (Flying) Luck.