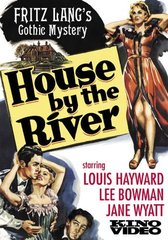 Where's That Been? - House by the River

We really shouldn't think of Stephen Byrne (Louis Hayward) as a wealthy wastrel; he is putting forth an effort to forge a career as an author, but with little success as his manuscripts are continually returned. Byrne lives in an ornate 'house by the river,' and is informed one afternoon by his wife's housemaid Emily Gaunt (Dorothy Patrick) that the plumber still hasn't fixed the bathtub in the downstairs area of the residence. Stephen generously offers the use of the upstairs facilities to Emily, and lasciviously waits for her to finish her cleansing constitutional as he plies himself with alcohol.

But Stephen has had one drink too many, and he makes a rather clumsy pass at Emily, causing her to shriek at his advances. In his attempt to quiet her so that his inquisitive neighbor (Ann Shoemaker) doesn't have reason to gossip, Stephen strangles the housemaid to death. Panic-stricken, Byrne is fortunate that his brother John (Lee Bowman) has happened by, and Stephen beseeches his brother to help him out of the dilemma. Though John has rescued his brother from many a scrape in the past, murder is something entirely different; he's only persuaded to help Stephen dispose of the body after Stephen lies to him that his wife Marjorie (Jane Wyatt), for whom John is secretly carrying a torch, is expecting a child. Understanding the shame and notoriety that will befall the couple should this news become wider known, John becomes an accomplice in Emily's death as the two men dump her remains in the river running by the Byrne residence.

Stephen benefits enormously from the publicity surrounding Emily's disappearance; one of his books becomes a best-seller, and he's working on another that will describe in loving detail how he committed the murder. John, however, is not so lucky: his guilt at having participated in the crime starts eating at him, making him short-tempered and irrational. The noose also begins tightening around his neck when Emily's remains are discovered by the police...only because the sack in which she was stored has John's name on it, thoughtfully stenciled there by his busybody housekeeper (Jody Gilbert).

Having fled Germany in 1934 after establishing himself as a major filmmaker with the likes of Metropolis (1926) and M (1931), director Fritz Lang began the American phase of his career with Fury in 1936. It was a blueprint for many films to follow; most of Lang's productions placed an emphasis on crime elements and featured an underlying theme of helpless individuals at the mercy of fatalistic forces. From his nightmarish The Woman in the Window (1944) to his wartime thrillers Man Hunt (1941) and Ministry of Fear (1944), Fritz Lang drew inspiration from his earlier Expressionism works to create the building blocks of what we know refer to as 'film noir.'

1949 found the director at a particular low point: working at Republic Studios, considered the MGM of Poverty Row but Poverty Row nevertheless. His last film, Secret Beyond the Door (1947), had been a box office disaster and his Republic project, House by the River (1950), wasn't particularly well-received by critics or theatergoers either. House by the River, however, is an underrated Lang film; though the movie was somewhat hurt by a low budget, the director overcame that handicap with a most riveting Gothic melodrama. House bears many similarities to The Spiral Staircase (1946), and that's no doubt due to Staircase scribe Mel Dinelli's adaptation of A.P. Herbert's 1921 novel. Special consideration must also be afforded cinematographer Edward J. Cronjager (Heaven Can Wait), whose low-level lighting (again, Republic) contributed to the atmospheric suspense, and Charles S. Thompson and John McCarthy, Jr., who were able to make the sets in the film look as if they were ripped from Victorian era paintings.

The back of House by the River's DVD box (a print of the once-believed-lost movie was finally discovered and released by Kino-Lorber in 2005) notes director Lang 'enjoyed a freedom at Republic that allowed him to make a unique and truly personal film,' much in the manner of Orson Welles (Macbeth) and John Ford (The Quiet Man). One freedom, however, not afforded to Fritz was his original idea that the role of Emily be played by an African-American actress; furthermore, her death would be the result of an innocent flirtation on the part of the Stephen Byrne character. The Republic bigwigs said no to that concept (they were no doubt skittish about the miscegenation angle), putting the kibosh on Lang's plan to introduce a subtle current of race relations into his film. The director was forced to fall back on Plan B, and House remains a sharp commentary on both moral depravity and the idea of 'an-eye-for-eye' retribution, a recurrent theme in many of his films.

Working at Republic also meant Lang had to make use of a low-wattage cast, but the director got a tremendous break by having actor Louis Hayward play Stephen Byrne. Stephen is a charming sociopath, and as his arrogance explodes exponentially, you know it's only a matter of time before he's going to get his comeuppance...and good. Sadly, Stephen's just desserts is the weakest element of the film because it's almost as if they ran out of time to adequately address the character's moral crisis and so House ends with a slight whiff of deux ex machina (though interestingly Hitchcockian in its execution).

Jane Wyatt, best-remembered as the supermom on TV's Father Knows Best, is good as Hayward's wife, who starts recoiling from him once she's finally able to see the monster he is. House benefits from a cast of first-rate (if unknown) character performers, including Ann Shoemaker, Jody Gilbert, Kathleen Freeman (as a party guest!), Sarah Padden, Howland Chamberlain and Will Wright (as the low-key police detective investigating the matter). The only real casting blunder was assigning Lee Bowman the part of brother John; it's not that Bowman is awful...it's just that he's not terribly convincing as a man thrust into a situation where he might pay the penalty for someone else's crime.