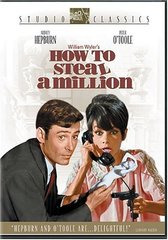 Colorama: How to Steal a Million

Audrey Hepburn plays a chic Parisian woman who meets a handsome stranger -- but beware! -- he is not quite what he seems. Together they gallivant around the City of Lights, trading quips, kisses, and mischief. No, it's not Charade (1963). It's not Paris When It Sizzles (1964), either. It's How to Steal a Million (1966) starring Audrey Hepburn and Peter O'Toole.

Despite the fundamental similarities, How to Steal a Million is lighter than Charade, and less zany and meta than Paris When It Sizzles; it's a delightful film with clever, funny dialogue, lovely sets, stylish costumes, a snappy plot, and a light, mocking tone. In fact, the film has the feel of a 1930s comedy combined with the modern zazz of the 1960s.

Directed by the legendary William Wyler in his third collaboration with Hepburn, he directed the actress in her first Hollywood film, Roman Holiday (1953), for which she won the Best Actress Oscar, and The Children's Hour (1961) five years before How to Steal. The behind the screen talent also includes one of the greatest film composers of all time, John Williams. Williams composed the music for Jaws (1975), Star Wars (1977), and Harry Potter (2001), among many, many others, but all of that was still to come when he worked on this. His catchy music skips and swoops around Paris fade out for the frequent sirens and wailing police cars.

Audrey Hepburn plays Nicole Bonnet, a wealthy Parisian whose aristocratic family has a famous art collection. But the world doesn't know that many of the 'masterpieces' in the Bonnet Collection are actually painted by Nicole's father, Charles (played by Hugh Griffith). He's an eccentric genius with a passion for forgery, and despite his daughter's repeated pleas to stop; he is having way too much fun fooling the world to quit.

But Charles' cozy arrangement is poised to come crashing down when he lends one of his family's most famous pieces, a sculpture of Venus, to a museum. The small statue is attributed to the Renaissance master Cellini, which puts its value around the one million dollar mark (hence the title of the film). But as Charles and Nicole know, Cellini never came near the statue, and it's a few centuries younger than it claims to be. If anyone discovers the truth, a scandal will erupt that would envelop the entire Bonnet Collection. After all, if there is one fake amongst the masterpieces, there might be others! Beyond the embarrassment and financial loss, Charles could end up in prison. The bleak outcome seems assured once Charles inadvertently gives his permission for a well-known scientist to test the Venus for insurance purposes.

Fortunately, a handsome thief (charming Peter O'Toole, whose blue eyes are practically a third co-star) breaks into the Bonnet mansion the night the Cellini Venus is unveiled at the museum. Nicole catches him stealing a painting (or is he?), and their amusing, goofy encounter gives her an idea: if the Cellini Venus is stolen before the tests are carried out, the Bonnet Collection and her father will be safe. Nicole calls the only thief she knows and he reluctantly begins plotting to steal the Venus. But things are definitely not what they seem.

Meanwhile, an awkward American tycoon (Eli Wallach) with a huge art collection arrives on the scene. (This part was originally given to George C. Scott, but he didn't show up for his first day of filming, so Wyler replaced him with Wallach. Scott partied too hard in Parisian nightclubs the night before his call, and he was stricken with a nasty hangover.) The tycoon is obsessed with the Venus, and also quite interested in Miss Bonnet. He begins paying her amorous attention just when she most needs to focus on her million-dollar theft.

The plot is twisty and clever in a refreshingly low-tech way; for example, the heist depends on human nature and basic tools, not Mission Impossible-style tech. And very few of the characters are who they say they are which makes this movie extra-entertaining. Another joyful jolt comes from watching Hepburn and O'Toole who quickly became friends during production and apparently had a great time making this. Their chemistry is evident and delightful to see.

How to Steal a Million was shot on location in Paris by one of Hepburn's favorite cinematographers, Charles Lang, who also shot Paris When it Sizzles and Charade. The film's action takes place in glamorous places such as the Ritz, Maxim's, the Bonnet mansion (the exterior is real but the interior was built on a soundstage) and the museum (the exterior shots of the fictional museum were filmed at the Musee Carnavalet, but the interiors were sets,) so nearly every shot is lovely.

Also, Hepburn plays a wealthy, sophisticated woman with an equally sophisticated hairstyle and Cleopatra eyeliner (including a memorable diamond-eyelid moment), which was a departure for her, but looks gorgeous. She's dripping in Cartier jewels and clothed in chic Givenchy costumes, so there are beautiful things everywhere. Givenchy designed Hepburn's costumes (and perfume -- he got a screen credit for Miss Hepburn's scent on Paris When it Sizzles!) since his work on Sabrina in 1954, and he does not skimp. O'Toole even makes a joke about Givenchy in the movie -- watch for it during the scene in his hotel room with Hepburn.

When How to Steal a Million was released it got mixed reviews, with some critics finding it out-of-touch and old-fashioned in the tumultuous world of 1966, but it did well at the box office. This stylish, lighthearted comedy remains watchable and surprisingly timeless, evoking the wonderful 1930s screwball films starring Carole Lombard, Cary Grant, and Katharine Hepburn. Indeed, Audrey Hepburn's character could be the slightly saner granddaughter of Susan Vance from Bringing Up Baby (1938), or Carole Lombard's Irene in My Man Godfrey (1936). Just like those screwball masterpieces, this film is packed with clever, glamorous, and simultaneously goofy moments. Plus, you'll never look at a boomerang the same way again!