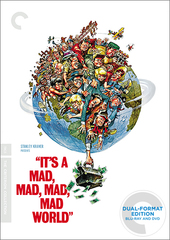 It's a Mad, Mad, Mad, Mad World. When one movie title has the word 'mad' four times it's because it needs it to be isotopic. We're indeed talking about one of the craziest movies of all time. Stanley Kramer brilliantly directed the film in 1963; Kramer directed such masterpieces as Judgment at Nuremberg, Guess Who's Coming to Dinner. He was also an important producer, producing well-known classics The Wild One and High Noon. What we also absolutely need to mention is this was Stanley Kramer's first comedy. Awesome isn't it? Of course, if you haven't watched the movie yet, you don't really know what I'm boasting about, but just wait and see.

You may wonder what this movie is about. Well, it goes like this: Before he dies in a car accident on a California road, Smiler Gordan, a burglar who just came out of prison, tells a secret to the drivers who stopped to help him: he has a fortune, 50.000 buried in a park in Santa Rosita under a big 'W.' He tells them if they find the money, they can keep it. The drivers go back to their cars. They each go their separate ways with the idea to go get the money.

They finally decide to stop and talk together to make a fair arrangement and try to split the money in the most equal way. However, there's always someone who is not satisfied, so they decide to give up the good manners and a breathless chase starts. Who will get the money first? The drivers don't know they're being watched by the police and, on their way, they face many challenges, meeting other people who will become part of the chase too. The most insane thing about this is they are not a hundred percent sure Smiler was telling the truth.

This film is like a cup of strong coffee. So many things and surprises happen it keeps your attention from the beginning until the end. Even if it's a two hour and thirty minute film, you can't feel time passing because it is so entertaining. I remember the first time I saw it, I didn't want it to stop. I was so captivated by the action and the characters (we'll talk about them later). Even the five minute opening credits are enjoyable. Saul Bass, probably the most famous graphic designer for film credits, created them. With these opening titles, you know what kind of movie you're about to watch immediately.

Here I come to the all-star cast including Spencer Tracy, Mickey Rooney, Milton Berle, Sid Ceasar, Buddy Hackett, Ethel Merman, Dick Shawn, Phil Silvers, Terry-Thomas, Jonathan Winters, Jim Backus, Dorothy Provine and many more. Among the main actors we notice many famous comic actors doing cameos: Joe E. Brown, Buster Keaton, Jack Benny, The Three Stooges, Zasu Pitts, Jerry Lewis, etc. Of course, all those actors give us some tremendous performances, but what's the most interesting are not the actors themselves, but the colorful characters they play.

All the actors in the main cast have their importance, their own well-developed personality. It's one of those films where it's hard determining your favorite character, because they are all so interesting. My personal favorites are Lennie Pike (Jonathan Winters) and Lt. Col. J. Algernon Hawthorne (Terry-Thomas). I can perfectly see a group of teens, after seeing this film, asking themselves: 'Hey, which actor/character did you like the most in the film?' What's also special about this is it's hard to determine who the main character is. Some may say it's Captain T. G. Culpeper (Spencer Tracy). They may be right, but I'm not a hundred percent sure about that.

This movie is crazy, sure, but not stupid. Yes, some characters are, but the movie itself is not. The film was not only well directed, but the technique is quite impressive too. It's a Mad, Mad, Mad, Mad World received the Oscar for Best Sound Editing (and really deserved it) and was also nominated for Best Cinematography, Best Film Editing, Best Sound Recording, Best Music Score and Best Original Song. We also have to mention this film was in 3rd position in the 1963 box office behind Cleopatra and How the West Was Won. I mention this because teens these days tend to see the top box office film and it's not always a masterpiece. So, if they want to see box office success, why not delve into classic films and watch something like It's a Mad, Mad, Mad, Mad World?