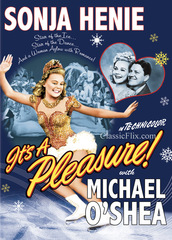 Colorama: It's a Pleasure

Sonja Henie was a virtuoso who conquered the world of competitive figure skating. She competed at the 1924 Olympics at the ripe old age of eleven (she came in 8th out of 8), and won her first of ten consecutive World Figure Skating Championships in 1927 when she was only fourteen. The next year, she took home her first of three consecutive Olympic gold medals, a record still unbeaten. But after twelve years spent dominating international competition, Henie turned her attention to show business. She left her native Norway and came to Hollywood in 1936 where she became one of the highest paid stars in the world with audiences delighted with the little blonde's peppy, photogenic face and her amazing feats on the ice.

By the time she made It's a Pleasure (1945) Henie was nearing the end of her movie career. It was her 13th of fifteen films, and her 11th and penultimate Hollywood production.

It's a Pleasure is also noteworthy as Henie's only Technicolor film. The color design is an over-the-top example of the mid-'40s saturated style with splashes of brilliant white, teal, chartreuse, emerald, and hot pink that rivals Thrill of a Romance (1945) for pure explosions of color.

It's a Pleasure has a fairly weak plot (The New York Times critic Bosley Crowther called it a 'flaccid fable') but has plenty of entertaining spectacle. Henie plays a talented ice skater in a live ice show in love with a boorish ice hockey player (Michael O'Shea). He drinks too much and punches out referees, but her love helps him reform. Then a bad but beautiful woman tries to entice him away just as Henie's career really takes off.

Marie McDonald plays Henie's nemesis and nearly steals the movie with her slinky style. McDonald was the daughter of a Ziegfeld Girl, and she grew up to be a showgirl, singer, and actress in mostly B-movies in the 1940s. McDonald was known as 'The Body' because of her shapely figure, and unsurprisingly became a very popular pin-up in WWII. She's great as the 'female heavy' in this.

In between the dramatic and romantic moments, Henie sambas in ice skates, waltzes in heels, and wears approximately a truckload of sequins and a wheelbarrow's worth of feathers. The skating sequences are enjoyable because of Henie's skill and charisma, but also because she is credited with introducing many of the elements that we now take for granted in figure skating, including ballet and dance influences, short skirts, and white skates. But even with those similarities it's fascinating to see how much figure skating has changed in the intervening decades. For example, Henie never totally straightens her legs and she seems more hunched over than skaters you'll see in the Olympics today. She often runs on the tips of her skates, and very rarely leaves the surface of the ice. Most of her routines are packed with spins and fancy footwork, but few, if any, jumps.

Although Bosley Crowther found the plot lacking, he praised Henie, writing that 'Miss Henie, it must be noted, takes to Technicolor as easily as she does to skates. And her whirling capers were never more varied or dazzling, especially one in which she skates to the sizzling strains of a Samba.'It's a Pleasure!' in short, is correct as to title only when it is ice-bound. Once it leaves the rinks, it develops weak ankles.'

Perhaps audiences began to feel the same way because Henie only made one more movie after It's a Pleasure. During and after her movie career Henie performed in a series of highly successful touring ice shows. Her profits from the 'Hollywood Ice Revue,' her movie salary, and various products and endorsements (she was a savvy businesswoman), helped make her one of the wealthiest women in the world. Along the way, she helped popularize live ice skating shows; for example, Esther Williams' suitor takes her to the 'Ice Follies' on a date in Thrill of a Romance!

The ice skater essentially paved the way for the elite athlete-turned-movie star trajectory that Esther Williams would follow a few years later. In fact, without Henie, Williams' movie career might not have happened. The story goes that Louis B. Mayer, the head of MGM, wanted to produce movies that could compete with Henie's ice spectaculars. The first attempt starred Joan Crawford in The Ice Follies of 1939, but it wasn't the hit he'd hoped for. So he ordered his minions to 'Melt the ice, get a swimmer, [and] make it pretty!' MGM's scouts found Williams and the rest is history.

Like Henie with figure skating, Williams' movies brought her sport to the masses and influenced modern synchronized swimming. She also followed in Henie's footsteps by starting companies and shows based on her movie persona, including a line of swimsuits, pools, and TV specials. We can thank Sonja Henie for her own sparkling movies as well as the million dollar mermaid!