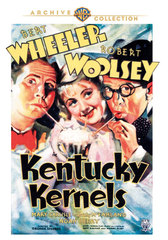 Where's That Been? - Kentucky Kernels

Long before Fred Astaire and Ginger Rogers began dancing cheek-to-cheek in musicals like Top Hat (1935) and Swing Time (1936), the duo responsible for keeping the coffers at RKO filled were a pair of vaudeville comedians who answered to Bert Wheeler and Robert Woolsey. The zany pair was thrust into the cinematic limelight when they were picked to reprise their comic relief roles (which they originated in the 1927 stage success) in a 1929 movie adaptation of Rio Rita and continued in 20 feature films for the studio until Woolsey's death in 1938. (Bert & Bob made an additional feature, So This is Africa, at Columbia in 1933 during a contract dispute with RKO.)

Wheeler & Woolsey, despite their phenomenal popularity during the 1930s, were off the radar of many comedy fans until they rated a prominent mention in Leonard Maltin's Movie Comedy Teams reference book in the 1970s. Author Ed Watz has also written about the team in the highly recommended Wheeler & Woolsey: The Vaudeville Comic Duo and Their Films, 1929-1937. In the book, Watz offers his opinion that Bert & Bob's Cockeyed Cavaliers (1934) ranks the best among their features (an opinion I concur with -- it's my personal favorite). Sadly, Cavaliers is one of the few W&W films not available on DVD, but fortunately, my second favorite is: Kentucky Kernels (1934).

For a comedy, Kentucky Kernels starts out on a particularly grim note: a young man named Jerry Bronson (Paul Page) contemplates ending it all when he proves incapable of dealing with his romantic troubles. He jumps into the deep blue, but winds up ensnared in a fishing net belonging to down-and-out vaudevillians Willie Doyle (Wheeler) and 'The Great' Elmer Dugan (Woolsey). The two entertainers, in their zeal to help Bronson, suggest that he start a family (by adopting a child) and begin life anew.

Mrs. Baxter (Margaret Dumont) gives the boys an assist by arranging for them to adopt young 'Spanky' Milford (George 'Spanky' McFarland) on Bronson's behalf. But when Willie and Elmer try to drop Spanky off at Jerry's residence, they learn that he's off to reconcile with the woman over which he was originally going to commit suicide. He asks the duo to keep an eye on Spanky until he returns from his trip with his fiancee.

This proves to be a tall task: Spanky is adorable, but he has one idiosyncrasy -- he likes to break glass. He's pretty much taken out all the windows at Willie and Elmer's as the two face facts: they're barely able to take care of themselves, let alone a child. Providence soon arrives in the form of a pair of lawyers (Harrison Greene, Clarence Wilson), who inform the duo that Spanky is heir to a vast Kentucky fortune. Willie and Elmer are persuaded to accompany their charge to the wilds of Kentucky, unaware that a bitter feud between the Milfords and the rival Wakefield clan still rages on...and on...and on.

What makes Kentucky Kernels such a winning comedy is the talent both in front and behind the motion picture camera. In the director's chair is George Stevens -- quite a few years away from his Oscar triumphs with A Place in the Sun (1951) and Giant (1956). Yet Stevens was already a seasoned movie veteran, and was fortunate to obtain a first-rate comedy education working at the Hal Roach Studio (a.k.a. 'the Lot of Fun') as a writer, cinematographer and director on many of Roach's classic two-reel comedies. Before tackling RKO classics like Alice Adams (1935) and Gunga Din (1939), Stevens would also helm Wheeler & Woolsey's The Nitwits (1935) -- which many consider to be the team's last outstanding feature film.

Legendary songwriting team Bert Kalmar and Harry Ruby -- whose biography is loosely dramatized in Three Little Words (1950) -- wrote Kernels' screenplay, with an assist from future W&W director Fred Guiol (The Rainmakers, Mummy's Boys). Kalmar and Ruby yielded positive results with Bert & Bob previously with Hips, Hips, Hooray (1934) and other titles in their screenwriting oeuvre include the Eddie Cantor romp The Kid from Spain (1932). The team of Kalmar and Ruby also enjoyed a wonderful association with the Marx Brothers; their stage play Animal Crackers became one of the team's best remembered vehicles, with Crackers' 'Hooray for Captain Spaulding' adopted as Groucho's theme song.

At the time of Kentucky Kernels' release, George 'Spanky' McFarland had already established himself as one of the silver screen's most appealing child stars. (His 'Spanky' nickname originated from his mother, who was always telling him 'Musn't touch...spankee, spankee!') He was one of the delightful stars of the 'Our Gang' series, and was borrowed from the Hal Roach Studios to appear in the Wheeler & Woolsey film. Spanky continued to make feature film appearances in the likes of The Trail of the Lonesome Pine (1936) and General Spanky (1936; an attempt by Roach to bring Our Gang into features) while paying his dues in the Our Gang troupe until 1942.

Noah Beery is on hand as Colonel Wakefield, the leader of the Wakefield clan, infusing his character with equal parts villainy and buffoonery. (He also demonstrates an impressive set of bass pipes with a chorus of 'One Little Kiss,' Kernels' big musical number. Noah also sang 'I Went Hunting' with Bert & Bob in Cockeyed Cavaliers.) The Milford family is represented by Aunt Hannah Milford, portrayed by actress Lucille LaVerne, whose face may not be familiar, but her voice certainly is; she's the Wicked Queen in the Walt Disney classic Snow White and the Seven Dwarfs (1937).

Other casting contributions to Kentucky Kernels include Mary Carlisle (replacing Wheeler & Woolsey's usual leading lady, Dorothy Lee), Marx Brothers straight woman Margaret Dumont (giving Woolsey the opportunity for plenty of Groucho-like barbs), and Willie Best...who, sadly, is identified here with his demeaning 'Sleep 'n Eat' nickname as he is reduced to Stepin Fetchit antics as handyman Buckshot. As an Our Gang fan, I was amused to see Clarence Wilson as one of the mouthpieces handling Spanky's estate; they weren't exactly on friendly terms in the Our Gang comedies Shrimps for a Day (1934) and Come Back, Miss Pipps (1941).

If you're unfamiliar with Bert Wheeler & Robert Woolsey, I cannot recommend Kentucky Kernels highly enough; it's a genuine laugh-riot with much of the engaging content that marks their work (puns, sprightly musical numbers, etc.). Other W&W films worth checking out (in addition to the ones I've mentioned) are Caught Plastered (1931), Peach O'Reno (1931 -- lots of racy pre-Code material in this one), Hold 'Em Jail (1932), and Diplomaniacs (1933). (And keep an eye on TCM -- they do run Cockeyed Cavaliers from time to time.)