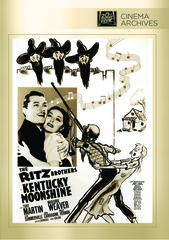 Dancing Under the Moon of Kentucky Moonshine

As movie comedy teams go, I would call The Ritz Brothers an acquired taste. In fact, I don't know too many people who have acquired it. I have been fascinated by them ever since seeing The Gorilla with Bela Lugosi and the even worse short subject Hotel Anchovy. I try to catch their movies whenever I can, so I was excited to see Fox release Kentucky Moonshine (1938) as part of its 20th-Century Fox Cinema Archives series.

Most of the Fox Ritz Brothers movies I've seen give the comedians supporting billing, making it clear they're providing comic relief for the romantic leads. Moonshine is an interesting change of pace in that the brothers clearly receive top billing, though the poster art used on the DVD cover implies that the guy and the gal who fall in love (I don't think I need to give a spoiler warning) drive the story. Fans of the Ritz Brothers -- I know there are some out there -- will get enough of the guys in this to satisfy. Their presence is beefed up compared to some other appearances where they are shoehorned into the picture.

Most of what I've read about brothers Harry, Jimmy, and Al Ritz indicates you had to see them live to really appreciate them. Suffice it say, their real success was as a stage act. Indeed, much of their appeal may be lost on modern audiences. Their similar physical appearance and lack of distinguishing costumes and personalities (unlike, say, the Marxes) blend them together. Often their screen work consists of song-and-dance numbers presented like a nightclub routine, and while their performances may not always be to everybody's liking, you can see them working hard and appreciate how they would go over in person.

I think the problem comes in between those numbers; when the Ritzes are forced to interact with other characters in a non-stage setting, they do a lot of mincing and mugging, with not much else to supplement their goofy double takes and yelps. Kentucky Moonshine makes better use of them than most of the other Fox films I've seen, integrating their musical abilities into a storyline that gives them some amusing things to do while not scaring off those who came to see the love story. Personally, I'd much rather see a second-rate movie comedy team do their thing than a lackluster pair of romantic leads, but there is a good balance between plot and hijinks, and there really isn't a lot of time spent dwelling on the romance.

Despite the emphasis on the Ritzes, the movie starts with a long sequence of Jerry Wade (Tony Martin) singing on his radio show, as if Fox is telling us, 'Don't worry, folks, we're not silly enough to make a whole movie of comedy. Sit back and enjoy some songs, and we'll ease you into it.' Wade's ratings are slipping, and as he and his sponsors brainstorm ideas to fix the show, they come up with the hillbilly gimmick. However, Wade knows the public won't go for showbiz phonies playing country folk. No, he wants to go to Kentucky to find the genuine article.

Struggling performer Caroline (Marjorie Weaver) happens to be in the office when Wade comes up with this plan, and she shares the tip with the trio of aspiring entertainers living with her at their boarding house. They decide to go down south so they can be 'discovered' and get their big break. While the movie does make passing reference to what it considers the more 'sophisticated' portions of the state, these characters set up shop in the small town of Coma. Let's just say that if you're hoping for a well-rounded survey of the wide array of personalities and diversions Kentucky has to offer, you're out of luck.

Indeed, as soon as Caroline and the Ritz Brothers reach their new cabin home, they are accosted by several gun-toting Hatfields, who mistake them for their hated rival family clan, the Slacks (Yeah, I was surprised it wasn't 'McCoys,' too). The confusion and shootin' lead to much of the hijinks in Moonshine. On one hand, I'll admit the whole mistaken identity and 'family feudin'' business must have seemed a little tired even in 1938, but on the other hand I think the story should have utilized the Hatfields more. As several of the clan leaders, Slim Summerfield and John Carradine don't have a lot to do, but they do it well, and Mary Treen is the amorous Hatfield who thinks she might find hubby material among the three Ritzes. Naturally, Jerry Wade makes his way to Coma to scout the talent, and the action predictably brings everyone back to New York for what they hope will be a spectacular broadcast.

Director David Butler directed many comedies at Fox and elsewhere, films featuring the likes of Shirley Temple and Kay Kyser, and went on to direct my favorite Hope/Crosby picture, Road to Morocco. Kentucky Moonshine isn't a classic, but it's a serviceable example of the kind of comedies Fox cranked out in the era. You get musical numbers, the Ritzes clowning around in fake beards, and a solid cast. It all adds up to an enjoyable diversion for movie fans and a real treat for fans of Hollywood comedy teams.