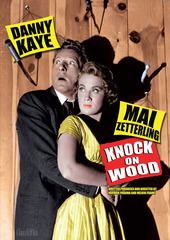 Where's That Been? - Knock on Wood

Ventriloquist Jerry Morgan (Danny Kaye) may be able to wow audiences with his act – but his love life is another matter entirely.  His fiancée, Audrey Greene (Virginia Huston), is incensed by his tendency to needle their relationship through his dummy Clarence onstage, referring to her as “a blonde, blue-eyed baby-faced purse snatcher.”  Insulting those with whom he’s intimate is becoming a frequent habit with Jerry, and his manager Marty Brown (David Burns) has made an appointment for him to see specialist Dr. Krueger (Steven Geray) when the two men leave for London after Morgan’s Paris engagement.

Meanwhile in the City of Lights, a foreign agent named Brodnik (Otto Waldis) has obtained secret plans for a defense weapon and has brought them to another confederate in Maurice Papinek (Abner Biberman), who fronts as a craftsman – Papinek has, in fact, been commissioned to repair Jerry’s dummies on a number of occasions in the past.  He’s attending to some damage done to Clarence (Jerry smashed the dummy after an argument with Audrey) and decides to smuggle the weapon plans inside the dummy and his “twin” Terrence to allow Jerry to unwittingly take the plans to Brodnik’s contact in London, a man named Laslo Gromek (Leon Askin)…who will “relieve” Morgan of the hidden precious cargo.  Gromek is unaware that he has competition in the race to obtain the plans – Godfrey Langston (Torin Thatcher), a wealthy businessman whose English veneer disguises his true colors as a man willing to sell out his country to the highest bidder.

During the flight, Jerry makes the acquaintance of Ilse Nordstrom (Mai Zetterling) – though it’s certainly not her idea; she becomes entangled with his antics en route to London, and even finds herself sharing the same hotel room and shower on two separate (and awkward) occasions once Jerry and Marty have reached their London destination.  Jerry will learn to his surprise that she’s actually Dr. Nordstrom, a colleague of Krueger’s, when he arrives for his consultation with the shrink.

The plans for the weapon find their way to both Gromek and Langston – both men eventually learn that the plans consist of two pages, and one is useless without the others.  So they redouble their efforts to get the remaining information, which puts the unsuspecting Jerry in the middle of the two factions – caught in a web of spies and quickly piling-up corpses, Morgan is able to elude both the authorities and his enemies through various disguises and subterfuges that climax in a hilarious ballet number before everything comes out in the wash.

To call David Daniel Kaminski a movie comedian would be a little like describing Albert Einstein as that guy who could do math; true, Danny Kaye made audiences laugh for several decades as the headliner of a number of popular box office vehicles, but that was just scratching the surface of his talents.  He was in many ways a true Renaissance man; he was an entertainer (acting, singing and dancing in films and on radio and TV), goodwill ambassador (with UNICEF), accomplished chef, amateur duffer, licensed pilot, baseball enthusiast (he was at one time a part-owner of the Seattle Mariners) and honorary member of the American College of Surgeons and the American Academy of Pediatrics.  (I think he might have also cut his own grass on weekends, who’s to say?)

But it was motion pictures that brought Danny Kaye most of his show business fame (not everyone was able to see his masterful concert performances or participation in Broadway stage hits like Lady in the Dark), which began in 1944 with his feature film debut in the Samuel Goldwyn-produced Up in Arms (a remake of Eddie Cantor’s 1930 musical comedy Whoopee!).  It would be the first of five films that Kaye would make for independent producer Goldwyn that featured Virginia Mayo; all of them — Arms, Wonder Man (1945), The Kid from Brooklyn (1946), The Secret Life of Walter Mitty (1947) and A Song is Born (1948) – have recently been reissued by the Warner Archive on DVD.  But one of the most elusive Kaye vehicles – that is, until it was resurrected by Olive Films in September of 2010 – was Knock on Wood (1954)…the first of five films that the entertainer would make for Paramount.

If it seems like I have a nostalgic fondness for Knock on Wood…it’s probably because it’s the first Danny Kaye comedy I saw in the early years of my movie-obsessed youth.  I was a little concerned that it might not hold up as well as I remembered, but I was pleased that Wood is still as riotously funny as when I first watched it those many years ago.  Film critic Glenn Erickson describes it as “bright and cheerful but not one of Danny Kaye's most memorable comedies”…but I respectfully disagree.  (Erickson also suggests that it pales in comparison to Danny’s brilliant The Court Jester, which is a little unfair…it’s kind of like being disappointed that Buster Keaton’s Battling Butler doesn’t measure up to The General.)

The movie was written, directed and produced by Norman Panama and Melvin Frank, the duo responsible for several Bob Hope vehicles (they contributed the story for My Favorite Blonde, whose show-business-entertainer-in-peril plotline is quite similar to Wood) – and I’m convinced that the reason why Wood remains a great Kaye comedy is that it borrows one of the cardinal rules of Hope’s successful romps: placing the comedy against the background of menace.  In fact, it wouldn’t be too difficult to see Bob in the role of Jerry Morgan…but why it works so much better with Danny is due to the entertainer’s flair for dialects: two of the most memorable scenes in the picture allow the Jerry Morgan character to escape his pursuers by adopting disguises, the first finds him in an Irish pub as a roisterer singing “Monahan O’Han” with a group of like-minded Hibernians.

The “Monahan” tune, written by Danny’s wife Sylvia Fine (she also composed three other songs for the movie, including the titular ditty), relies heavily on the entertainer’s patented “git-gat-gittle” scat-singing, tongue-twisting patter, which can also be heard (Morgan exchanges nonsense lyrics with one of his dummies) when we first see Jerry performing in a nightclub.

The second time Jerry must resort to disguise, he masquerades as a veddy British customer perusing automobiles in a showroom, attended to by a car salesman (Gavin Gordon).  After distracting the salesman by asking if he can take one of the cars for a test drive, Morgan finds himself switching roles and playing the salesman when he’s approached by a real customer (Rex Evans).  A wacky sequence involving a car that seemly has a mind of its own (its seats go up and down, doors open and shut) puts Kaye and Evans in the driver’s and passenger’s seat…though your mileage may vary (pun intended) on your appreciation of this.

One of my favorite gags in Wood actually precedes the action in the car showroom; Jerry is on the run from several policemen, and finds himself taking a shortcut via the backseat of a car in which an unflappable man and wife are seated, clueless as to why this man has invaded their personal space.  Kaye’s Morgan does this three more times in the film (and it’s always the same couple in the car); the fourth after he and Ilsa have tied the knot…and as they pass through the car the woman observes: “Healthy looking couple…they’ll probably have a large family…”

“We’d better get a bigger car,” her husband replies drily.

In later life, Danny Kaye was reticent to discuss his old movies…but he retained a special fondness for Knock on Wood, observing that bits like the climactic ballet and a hilarious sequence in which he hides under a desk as Langton and another spy are conversing (Morgan must match their scratching and slapping movements to avoid detection) were “classics,” a word he was particularly loathe to use.  Personally, I consider Knock on Wood to be Danny Kaye’s best feature behind The Court Jester (a film comedy that is so “practically perfect” it’s undeniably his masterpiece).  There’s a rapid-fire bit of dialogue toward the end of Wood that is reminiscent of what will be known as “the pellet with the poison” routine in Jester when Jerry is trying to convince the police of his innocence: “There was Brodnik and Gromek and Schlaslik and Brutchik…”

Actress Mai Zetterling plays Danny’s romantic interest in Wood; the Swedish-born actress appeared in features both in her native country and England but eventually grew tired of the types of roles available (she’s great in Wood, but she doesn’t get much to do) and turned her talents toward the other side of the camera.  Torin Thatcher is great as the suave villain (you might recognized him as the baddie in The 7th Voyage of Sinbad), and this movie also features character great Leon Askin (General Burkhalter on Hogan’s Heroes) as the thinnest you’ll ever see him.  (I’ve always been curious as to whether his “Gromek” was related to the same “Gromek” in Alfred Hitchcock’s Torn Curtain…)  A classic movie buff I know asked me in all earnest as to why there aren’t more Danny Kaye fans out there…and my only response to that is that maybe they’re not watching the right movies.  Knock on Wood is a marvelous place to start.