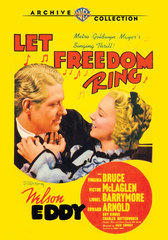 Where's That Been? - Let Freedom Ring

As construction on the railroad heads toward the sleepy little hamlet of Clover City, the Old West is set to collide with the New. Granted, 'the Iron Horse' will bring much needed progress, but improvements of this sort also have an unfortunate tendency to attract particularly unsavory elements, exemplified in this tale by oleaginous Wall Street tycoon Jim Knox (Edward Arnold).

Knox -- with the help of an army of hired goons, supervised by chief henchman Chris Mulligan (Victor McLaglen) -- doesn't just want a bit o'land for a measly right-of-way...he wants all the territory owned by the ranchers in town, and isn't above burning a few people out to get it. Knox operates beyond the reach of the law, for he not only has the editor (Raymond Walburn) of Clover City's newspaper on his payroll, he's also got town judge David Bronson (Guy Kibbee) in his well-heeled pockets. (Bronson is running for re-election and let's just say Knox has set up a nice super-PAC for his needs.)

Knox's opposition comes in the form of Thomas Logan (Lionel Barrymore), who's banded together his neighbors to fight what's surely a most futile battle against the Knox machine. Logan is hoping his son Steve (Nelson Eddy), just returned from four years of study back East (a Hah-vahd man), will lend a hand in stopping Knox from accomplishing his goal of turning Clover City into his own personal fiefdom. Steve doesn't seem too interested in siding with his pop; he argues to Logan and his friends that they should try to find some common ground with the rapacious scoundrel.

Steve's just putting on an act, of course; his plan is to infiltrate Knox's organization and gain his confidence while really siding with the ranchers in his guise as 'The Wasp.' With the help of his sidekick 'The Mackerel' (Charles Butterworth), they kidnap editor Underwood and force him to publish editions of the Weekly Bugle that editorialize against Knox and his despicable tactics. It won't be easy for Steve: to accomplish his undercover work, he must make himself the most hated man in Clover City, which will jeopardize his relationship with childhood sweetheart Maggie Adams (Virginia Bruce).

Let Freedom Ring (1939) is a true movie oddity: it's a musical Western with elements of comedy, romance and action -- really, the best way to describe it is a big budget version of a Zorro serial. (You know: dashing hero pretends to be a fop even though he's really a two-fisted he-man.) Scripted by Ben Hecht (Scarface, Design for Living), a New York Times reviewer (with tongue firmly in cheek) dubbed Hecht 'the George M. Cohan of the movies' because Freedom ladles on the patriotism a little thick at times. Still, the underlying message is a most positive one: it addresses themes of equality (the men hired by Knox to establish residency in Clover City in order to swing Branson's election comprise a melting pot that includes Italians, Russians, Germans, Swedes, and the Irish) and emphasizes how freedom of the press is essential to any serious democracy.

I was a little leery sitting down with Let Freedom Ring because of what I'll call The Nelson Eddy Factor. Eddy's cinematic legacy is comprised of a string of movie musicals in which he co-starred opposite Jeanette McDonald (Rose Marie, Maytime), feature films that are not exactly my cup of Orange Pekoe. But even though you'll have to tolerate Eddy warbling (I like how he's able to sing 'When Irish Eyes Are Smiling' in 1868 when the song was actually written in 1912), I confess I was very impressed with his thespic abilities in; he makes for a most engaging hero, and even proves himself quite handy using his fists in a scene in which he takes down McLaglen's Mulligan.

The cast in Let Freedom Ring is the strong point; I love Virginia Bruce (The Murder Man, The Invisible Woman) because she's not your typical simpering damsel in distress -- in fact, she engages in quite a bit of sprightly verbal give-and-take with villain Knox ('If you're such a rich man, why are you a thief?') and demonstrates a none-too-shabby set of pipes when she lets loose with 'My Country 'Tis of Thee' at the film's finale (you can probably surmise where the title Let Freedom Ring comes from). You also get to watch Lionel Barrymore and Edward Arnold continue their grudge match from the previous You Can't Take It With You (1938); the two actors first worked together on Rasputin and the Empress (1932), and comprised the cast of The Penalty (1941) and Three Wise Fools (1946).

H.B. Warner plays an oddball character named Rutledge, and though he's billed as George F. Hayes you'll recognize 'Gabby' Hayes as the rancher who loses his spread to Knox's thugs (hey, it wouldn't be a Western without Gabby). I was a little disappointed Guy Kibbee doesn't have a more substantial role, but he makes up for his lack of screen time in a sequence where he presides over a trial and tells 'Gabby' and those assembled: 'Any man who hasn't got sense enough to keep his house from burning down ain't entitled to have a house.' (Do I need to tell you how this turns out?)

Jack Conway sits in the director's chair on this one, and does quite well in getting the disparate elements of Let Freedom Ring to mesh. I was really taken with this little sleeper.