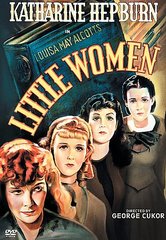 Christmas is waiting impatiently at the door, which means hot chocolate, cookies and, of course, Christmas movies made to be watched with friends and family. The movies of this holiday season make us smile and put us in the holiday spirit. Many excellent Christmas films have been made through the ages, but my choice is George Cukor's Little Women. It might not be the most 'Chrismasy' of them all, but it represents the holiday perfectly by warming our hearts.

Little Women takes place in New England during the Civil War. It tells the times, the joys, the happiness, the friendship and the loves of the March sisters: Meg (Frances Dee): the eldest sibling and the refined one; Josephine or 'Jo' (Katharine Hepburn): the tomboy whose dream is to be a celebrated writer; the timid Beth (Jean Parker): a sensible piano player; and the coquettish Amy (Joan Bennett): the youngest of them all and an artist. They live with their kind mother 'Marmee' (Spring Bryington) and manage to defy their solitude by being with each other. The film is mostly focused on Jo, who becomes good friends with their neighbor Theodore 'Laurie' Laurence (Douglass Montgomery).

This version of Little Women, released in 1933, was the third adaptation of Louisa May Alcott's novel of the same name after the silent versions of 1917 and 1918. Little Women was well received upon release, both financially and critically and was nominated at the 1934 Oscars for Best Picture and Best Director, winning the award for Best Adapted Screenplay.

This film was released at the perfect moment in 1933 since the United States was suffering from the Great Depression and movies like Gold Diggers of 1933 or Baby Face depicted this hard period of history in different ways. Little Women is also about a major event in the history of the USA, the American Civil War, but the film comforts its viewers. The story is full of life and makes us cry, yes, but, it also makes us smile. Little Women was made to lighten people's hearts and gives them hope that life can be good though it's simple. The four sisters are a delight to watch; they're not just sisters, but also best friends. Just like people during the Great Depression the Marches aren't rich, but they don't need a big fortune to have a good time: friendship and family are enough for them.

Little Women is a story about the power of generosity, first proved to us in the Christmas scene when the four girls decide to use the money Aunt March gives them as a gift to buy a present for their mother. When Christmas Day comes they decide to give their delicious breakfast as a present to a poor family who live in miserable conditions. Even though this is difficult, especially for poor Beth who salivates at the view of the popovers, they only feel better after their good actions. It's a real life lesson for all of us.

George Cukor does an amazing job transposing Louisa May Alcott's characters to the screen, and their respective actors give them justice. There couldn't be a better choice than Cukor to direct this cast. He was excellent at directing 'ladies pictures' and gives them a vivid aura and strong personalities.

All the stars are excellent and deserve accolades. Katharine Hepburn stars her second film here and what a performance! Dynamic, touching, funny, the role is perfect for her. Blonde Joan Bennett proves her versatility as Amy March, a role different from the ones she later played in Fritz Lang's films noir. Frances Dee is elegance itself as Meg March. Jean Parker is the most touching one of the lot as Beth. Spring Bryington, who plays Marmee, gives a wise performance, full of warmth. Douglass Montgomery as Laurie makes a perfect duo with Hepburn and his sense of humor is contagious. Paul Lukas makes an appearance late in the film, but his presence is much appreciated. Edna May Oliver, John Davis Lodge and Henry Stephenson have smaller roles, but they're well chosen and remain as unforgettable as the rest.

Little Women is also much visually stunning due to the snowy landscapes and 19th-century New England architecture. Walter Plunkett's costumes are also important to the film. (He did the costumes for Singin' in the Rain and Gone With the Wind, another film set during the American Civil War.) For one of her dresses, Katharine Hepburn asked Plunkett to copy a dress her maternal grandmother was wearing in an old picture. Walter Plunkett also had to rapidly create a series of costumes that would hide Joan Bennett's pregnancy at the time she was shooting.

The devotion and passion of the characters, especially Jo's, makes you want to get up and accomplish something with your life. George Cukor's classic is the perfect feel-good movie to watch during Christmas. It makes you realize that the most important thing during this holiday aren't gifts, but your friends and your family. Masterpieces like Little Women are here to remind us of that.