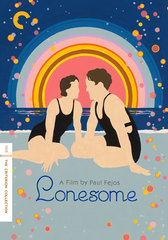 Where's That Been? - Lonesome

In his 1996 book Lost Films: Important Movies That Disappeared, author Frank J. Thompson discusses a number of motion picture treasures that sadly did not survive the ravages of time and neglect. Thompson reconstructs the plots of these missing movies by relying on reviews from the various trade magazines of the day, and one of the more fascinating chapters focuses on a feature by Hungarian emigre Paul Fejos -- his first U.S. film (he had previously directed a few movies in his home country), entitled The Last Moment (1927), which he financed for 3,000. Moment tells the tale of a man who literally sees his the events of his life pass before his eyes once he chooses to drown himself in a lake.

Charlie Chaplin saw Moment at a private screening (his co-star in The Gold Rush, Georgia Hale, appears in the film) and arranged for it to be released on a wider theatrical scale through United Artists, where it was the recipient of favorable box office and much critical acclaim. (A critic for the Film Spectator wrote: 'Introducing to you Mr. Paul Fejos, Genius.') This led to a contract offer from Universal Pictures -- who was amenable to Fejos' insistence on complete artistic control -- and the director's second film, which is available for viewing and with its release to DVD in 2012 (after being selected for the Library of Congress National Film Registry in 2010) became one of the most delightful silent film surprises in recent memory.

Lonesome (1928) is the story of two working-class singles: Jim (Glenn Tryon), who works a punch press at a factory, and Mary (Barbara Kent), a telephone operator. The beginning of the movie features our would-be lovers preparing to go to work (in separate rooms, of course), and later, scenes of Jim and Mary at work are superimposed over the sweeping hands of a clock, suggesting that the two of them are cogs in a massive, impersonal machine. They only have to work half-a-day owing to the fact that it's Saturday...with Sunday offering a holiday in the Fourth of July.

Both Jim and Mary decide independently to head to Coney Island in celebration of the 4th, and the two of them 'meet cute' once they've changed into their swimming togs on the beach. Jim brags that he's made a fortune on Wall Street in an attempt to impress Mary (and Mary acts equally coy, pretending to be a 'debutante'), but once he's become better acquainted with the woman for whom he's fallen madly in love, he decides to come clean and confess he's only a blue-collar working stiff. The couple spend the day and most of the night together enjoying the amusements Coney has to offer: the concessions, the rides, etc.

A mishap on a roller coaster -- Jim and Mary are riding in separate coasters, racing toward the end of the ride -- causes the couple to be separated from one another. Lonesome presents a palpable sense of desperation as the two lovers fervently try to locate each other among the formidable throng of the Coney Island crowds. Neither of them know the other's last name, so if that maxim about 'eight million stories in the Naked City' is true, their relationship is pretty much doomed.

Lonesome tells a simple tale, but it's supplemented by the technical audacity of director Fejos, who makes Jim and Mary's accounts of emotional longing a visual feast for the eyes. Fejos employs long camera takes and movements to convey the stultifying boredom in both of their lives, yet courageously relies on double- and triple-exposures (as in the movie's opening sequences) so that the details of their existences are presented in shorthand, thus risking putting the audience to asleep. Fejos also hand-tinted minute details in several scenes in the movie, which makes some of the nighttime Coney Island sequences come to life with brilliant color (the scene featuring the pink and blue balloons really got my attention).

Lonesome also features several 'talkie' sequences; not uncommon in movies at that time as the transition to sound films was underway (thank you, The Jazz Singer), but in this particular case Universal shouldn't have bothered. They don't completely hurt the movie, but the dialogue is clunky and the camera set-ups lack the fluidity present in the rest of the film. The chemistry between actors Glenn Tryon and Barbara Kent also dries up, since silent acting and sound film acting are two different sides of a coin, each relying on their own nuance and area of expertise.

Before his appearance in Lonesome, Tryon was a well-known vaudevillian and stage actor hired by producer Hal Roach as a Harold Lloyd substitute for a number of slapstick comedies (Along Came Auntie, 45 Minutes from Hollywood) that didn't really click with audiences; his later Hollywood career found him enjoying success as a writer-director. Glenn's co-star also worked at the Roach Studios (Barbara is the damsel-in-distress in No Man's Law, a 1927 'Rex, King of the Wild Horses' western featuring a villainous Oliver Hardy as the disreputable 'Sharkey Nye') but is probably better known for appearances in the likes of Flesh and the Devil (1926) and Feet First (1930). Kent retired from acting in the 1940s and for the rest of her life refused to be interviewed about her former motion picture career.

The romance of Tryon and Kent's young lovers is most reminiscent of Janet Gaynor and George O'Brien in Sunrise (1927), and Lonesome will also remind silent film fans of Harold Lloyd's Speedy (1928; which features similar Coney Island scenes) and King Vidor's The Crowd (1928; with its theme of individuals engulfed by crowds). I was simply astonished at how Fejos expertly blends dazzling film technique with an all-too-human story that never gets overly sticky or maudlin. For all its brilliance, the most moving image in the film for me remains the sequence where Tryon's Jim puts a penny in a weighing machine and receives a fortune card reading 'You're about to meet your heart's desire.' He looks up, and there's a reflection of Mary in the machine's mirror.

The Criterion DVD and Blu-ray of Lonesome also features Fejos' The Last Performance (1929; recently unearthed in a Hungarian print) and a reconstructed sound version of Broadway (1929), a million-dollar musical that also features Lonesome's Tryon. The Criterion edition is also packed with additional bonus features, and is simply a must-own item for the library of any silent movie devotee. You'll be completely entranced by the trappings of a film whose simple message is summed up in an opening title card: 'In the whirlpool of modern life...the most difficult thing is to live alone.'