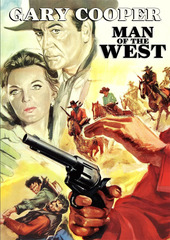 Where's That Been? - Man of the West

In the 1940s, director Anthony Mann established his cinematic reputation by helming several film noirs, many of which (Railroaded, T-Men, Raw Deal) are considered classics by vintage movie fans today. He continued to dabble in the noir style after he was hired by MGM in 1949; Mann's Border Incident is perhaps one of the most uncompromisingly violent pictures ever released by the studio renowned for its family fare, and Side Street reunites the two principals who played the doomed young lovers in RKO's previously released They Live by Night (1948): Farley Granger and Cathy Downs.

Mann extended his noir sensibilities to movies slightly off the beaten path of the film style: his 1949 film The Black Book (a.k.a. Reign of Terror), produced by Walter Wanger and released by Mann's old studio Eagle-Lion, is set against the backdrop of the French Revolution. With Devil's Doorway (1950) and The Furies (1950), Anthony began expanding on territory established in previous noir westerns (like 1947's Ramrod and 1948's Blood on the Moon), culminating with Winchester '73 (1950) -- a film that revitalized the Western genre at the time while becoming one of James Stewart's biggest box office hits. In Stewart's Lin McAdam, Mann introduced a new Western hero -- a man who was not above committing violent acts in pursuit of revenge, and whose obsession with meting out frontier justice revealed a much darker, sinister nature than the typical movie Western protagonist.

The collaborations between Stewart and Mann (who had worked together in stage productions) were eight in number, and featured such mature westerns as Bend of the River (1952), The Naked Spur (1953) and The Man from Laramie (1955). The two men had plans for a ninth feature, Night Passage (1957), but a falling-out between the two artists put an end to any future projects (director James Neilson wound up taking over). Before undertaking two epics in the 1960s, El Cid (1961) and The Fall of the Roman Empire (1964), Mann would tackle three more westerns -- one of which, Man of the West (1958), just returned to DVD (and debuted on Blu-ray) this past November.

Mann's flawed hero in West is Link Jones (Gary Cooper), who boards a train in the tiny hamlet of Crosscut for the purposes of traveling by train to Fort Worth. Link hails from a settlement called Good Hope, and the townsfolk there have entrusted him with enough funds to hire the services of a schoolteacher for Good Hope's children. Aboard the train, Link makes the acquaintance of gambler Sam Beasley (Arthur O'Connell) and Billie Dawn (Julie London), a saloon chanteuse; knowing of Link's mission, Beasley tells Jones that Billie might just be the schoolteacher for which he's searching.

At a stop to take on wood, the train is robbed by four members of the Dock Tobin Gang -- Coaley (Jack Lord), Trout (Royal Dano), Ponch (Robert J. Wilke) and Alcutt (Jack Williams). Though the gang succeeds in making off with Link's carpetbag, which contains the schoolteacher funds, the robbery itself is botched, and the desperados barely manage to get away, with Alcutt taking a bullet in the back from one of the train guards. The failed hold-up also results in stranding Link, Sam and Billie in the middle of nowhere. Link agrees to help his newfound friends get to safety, particularly since Sam has been saddled with a twisted ankle.

The three passengers arrive at a nearby house -- Link knows of its existence because he grew up in the same dwelling as a child. But the house is also serving as the gang's hideout, and after meeting Tobin (Lee J. Cobb), Sam and Billie learn Tobin was responsible for raising Link in his formative years. Yes, Link once belonged to Dock's outlaw gang, but managed to break free from their influence years ago; he got married, started a family and put his past behind him in the interim. Link knows the trio's only hope of escape depends on his returning to his disreputable past: namely, helping Dock and the others to rob a bank in the nearby town of Lassoo.

A frequent leitmotif in the westerns of Anthony Mann involves what the Germans referred to as a 'doppelganger;' often the protagonist in a Mann western must confront an individual that functions as the other side of the coin representing the hero (an 'evil twin,' if you will). In Winchester '73, Lin McAdam (Stewart) squares off against Dutch Henry Brown (Stephen McNally); in Bend of the River, reformed outlaw Glyn McLyntock (also Stewart) finds a kindred spirit in Emerson Cole (Arthur Kennedy), who represents the kind of man McLyntock might have become had he not decided to walk the straight-and-narrow. In Man of the West, Link Jones' darker counterpart is his cousin Claude Tobin (John Dehner); Claude is every bit as perverse as Dock and the other members of the gang, but possesses a little more polish and sophistication. When Link asks Claude why he never 'grew up' and left the gang, Claude reveals a fierce loyalty to Dock, and admonishes Link in one scene that his departure (Link's) resulted in Tobin's emotional and mental breakdown. 'You see...I watch out for that old man,' Claude explains to his cousin. 'I love him...and I watch out for him.' In the eventual shoot-out between Link and Claude, Link is positioned on top of a house porch and Claude hides underneath, a further bit of symbolism at the duality of the two men.

The Jekyll-and-Hyde theme of Anthony Mann's westerns addresses a larger subject also featured in many of the director's films: civilization vs. the Old West. In Sam Peckinpah's Ride the High Country (1962) and John Ford's The Man Who Shot Liberty Valance (1962), characters are forced to choose between maintaining their 'primitive' ways of the past or adapting to the rapid changes brought upon by civilization (the building of the railroads, statehood, etc.). Man of the West also focuses on this theme: in the movie's expository sequence, Link Jones changes out of his cowboy duds (after striking a 'majestic' pose on his horse during the opening credits) and into fancier clothing in order to board the Fort Worth train. Link is comically startled when the train first pulls into Crosscut, suggesting that he's a bit overwhelmed by the advances brought upon due to rail, and finds it difficult to sit comfortably in his seat (ostensibly due to his long legs), which suggests his unfamiliarity with such an experience.

Dock and his gang of reprobates represent the old ways, and since none of the outlaws are prepared to become part of civilization, Link is forced to kill them, which is why he briefly regresses to his former criminal ways. Dock's grandiose plan to rob the Lassoo bank will prove how out of touch he is -- Lassoo has become a ghost town, with a Mexican couple squatting in what once was the town's bank. After picking off the members of the gang, Link returns to the camp to gun down Tobin. 'You've outlived your kind and you've outlived your time,' bellows Link at the man who was practically a father to him. Though his reasons for disposing of the gang are rooted in his attempt to recapture the money stolen from him, Link also realizes that there's a catharsis in his killing: these men are simply not fit to mingle with decent people.

Man of the West also features some startlingly frank themes for a movie western. The character of Billie is forced to disrobe for the gang in one sequence, with Coaley holding a knife to Link's neck. (Link later exacts revenge by humiliating Coaley in the same fashion during a fistfight; Coaley comes close to killing Link before Dock guns down Coaley.) It is strongly hinted that there have been indiscretions in the singer's past; still, Link assumes the role of her protector ('She's mine,' he bluntly tells the gang when they first meet) and she falls in love with him despite his being married and having a family. ('I've found what I want,' she says sadly at the end, 'and I can't keep it, can I?') In many westerns (one of the most conservative genres in cinema), a violated woman like Billie wouldn't make it to the end credits alive...and yet the final sequence of West features her and Link riding off together in the direction of Good Hope (a rather ironically named town, to be sure). (I've long suspected that screenwriter Reginald Rose, who adapted Will C. Brown's novel The Border Jumpers, decided to give Link a wife to spare a positively portrayed character like Billie that fate.)

There was a time when I wondered how Man of the West might have turned out if Anthony Mann and James Stewart hadn't had that disagreement that severed their working partnership and Jimmy was cast in the Link Jones role. But with each viewing of the film, I'm more and more convinced the choice of Gary Cooper was the proper one; it's undeniably his last great silver screen showcase. Man of the West has attracted a cult following over the years and there was a time when it wasn't even available on DVD (it finally received release in 2008, and has also been made available in a number of compilation discs since then; I'm such a fan of the movie I sprung for the Region 2 copy, which was released three years earlier in 2005). If you're of the opinion that Clint Eastwood's Unforgiven (1992) is one of the all-time great Westerns, I invite you to sit down with West for a look at a similar film produced nearly thirty-five years before the release of that Oscar-winning film.