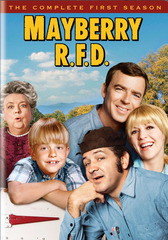 In the history of television, only three situation comedies finished their final seasons ranked #1 in the Nielsen ratings for that year.  I Love Lucy was the first to accomplish this feat; the classic TV comedy was so popular that it even continued for an additional three seasons as a series of hour-long episodes known informally as The Lucy-Desi Comedy Hour.  Seinfeld is the most recent member of the #1 club; despite being the ratings champ for the 1997-98 season, star Jerry Seinfeld resisted the temptation of more money from the NBC network for another go-round with the show in the fall.

The third sitcom has a bit in common with the other two (besides being #1 in its final season, of course).  CBS executives, flabbergasted that The Andy Griffith Show finished in first place for the 1967-68 season, pleaded and begged the show’s star to renew his contract; Griffith said no thank you and tried — as his former TAGS co-star Don Knotts did when he departed after five seasons — to jumpstart a movie career (which had seen some success before his hit TV series in 1957’s A Face in the Crowd).  (Andy’s feature film aspirations were unsuccessful, and he was eventually welcomed back into the CBS fold in 1970 with two series that tanked.)  Like I Love Lucy, The Andy Griffith Show would have a life after its departure from the network schedule and also for three seasons…in the form of a spin-off series, Mayberry R.F.D.

Four episodes before Sheriff Andy Taylor (Griffith) made his final patrol car rounds in America’s favorite sleepy Southern town, an installment entitled “Sam for Town Council” introduced the man that would come to replace Andy as Mayberry’s resident advisor and sage.  F Troop veteran Ken Berry played widowed farmer Sam Jones, who is persuaded to run for a vacant seat on Mayberry’s town council since the only other man in the race is fix-it shop proprietor Emmett Clark (Paul Hartman).  Emmett is well-liked and respected by his friends, to be sure, but all are in agreement that allowing him near the levers of government is not unlike letting a five-year-old play with power tools.  So Sam is given the nod by the town’s “machine,” and he wins the election.

The final episode (#249) of The Andy Griffith Show was appropriately titled “Mayberry R.F.D.” and served as the pilot for the spin-off that would premiere in the fall.  Sam has an Italian friend, Mario (Gabriele Tinti), that he knows from his stint in the service (Sam was stationed in Italy), and has asked him to help out on his farm…Mario brings his sister and father along (who do not speak a word of English), and the wacky complications ensue.  Just as Sam is making arrangements for Mario’s family to work on another farm (they’ve predictably turned his life upside-down), he’s touched by the sentiments expressed by several Mayberry residents at a town meeting welcoming the newcomers…and decides maybe he can make this work after all.

Well, apparently that didn’t come to pass — because by the time R.F.D. premiered in September of 1968, Mario and Company had vanished and were never referred to again.  Instead, the inaugural episode of the series tied up some loose ends from TAGS by showcasing the nuptials of Sheriff Taylor and longtime girlfriend Helen Crump (Aneta Corsaut) in “Andy and Helen Get Married.”  Don Knotts appeared in this episode (as former Deputy Barney Fife) as did Ron Howard (who played son Opie on TAGS), the only time those two players would appear on R.F.D.  With Andy and Helen manacled to one another, Beatrice “Aunt Bee” Taylor (Frances Bavier) decides to go back to West Virginia and live with her sister…but Sam convinces her to take on the job as his housekeeper for he and son Mike (Buddy Foster).  There are complications at first (Aunt Bee is petrified at the Jones’ cow, and won’t go near the chicken coop to get eggs) but everything is worked out in the end.

Bavier’s Aunt Bee would be the only character from TAGS since its inception to transition to the spin-off.  (After two seasons of R.F.D., the actress decided that ten years of playing Aunt Bee was enough; Alice Ghostly joined the series in the third and last season as — I’m not making this up — Alice Cooper, Sam’s cousin.)  Also in the R.F.D. cast were amiable doofus Goober Pyle (George Lindsey, who joined TAGS in its third season, and eventually replaced cousin Gomer Pyle [Jim Nabors] when Gom got his own series in Gomer Pyle, USMC), fastidious county clerk Howard Sprague (Jack Dodson, a regular in season 6) and the aforementioned Emmett Clark, who was brought in to replace departing cast member Howard McNear (a.k.a. Floyd the Barber) in the final season.  Sam’s son Mike and Sam’s romantic interest, Millie Swanson (Arlene Golonka) rounded out R.F.D.’s regulars; both had also previously appeared on TAGS— Millie was originally Howard’s girlfriend in two episodes, only her last name was “Hutchins” then.  (Continuity was not the Griffith show’s strong suit.)

Other minor characters from TAGS made occasional appearances on R.F.D.: Emmett’s long-suffering wife Martha (Mary Lansing), Aunt Bee’s frenemy Clara Edwards (Hope Summers), etc.  When R.F.D. premiered on CBS, it was almost as if Sheriff Andy Taylor had never left…and in several instances he hadn’t; Griffith guested in four segments of the series including the aforementioned “Married” in its inaugural season.  The Taylor character was referred to constantly even when Griffith wasn’t scheduled for a guest shot; it wasn’t until the second season opener, “Andy’s Baby,” when we learned that the town’s former lawman was now a state investigator based out of Charlotte.  (He and Helen bring their newborn, Andy, Jr., to town for a christening…and a fight breaks out between Goober, Emmett and Howard as to who should be the godfather.)

If it sounds as if I know more about Mayberry R.F.D. than I should…it’s because over at my blog, Thrilling Days of Yesteryear, I once played host to a feature entitled “Mayberry Mondays.”  I only had a vague memory of the R.F.D. series — namely the opening credits, where Sam and Mike are playing a game of father-and-son catch and Mike breaks a window in his pa’s shed — and so I sat down with every single episode of the show, serving them up with a healthy dose of snark.  I’ve always been curious as to why the series was so popular; it ranked #4 in the Nielsens in its first two seasons, and was still in the Top Twenty (#15) in its final year when the CBS network handed it a pink slip.  (The network cancelled most of their “rural” shows that year, including The Beverly Hillbillies and Green Acres.)

Revisiting the episodes gave me a new perspective on the show.  It’s not nearly as bad as its detractors argue (I know a slew of Mayberry fans whose dogma dictates they will not watch any portion of the town in color) but it doesn’t break a lot of new ground in television comedy, either.  The show appears to have remained popular because it was familiar and comfortable to viewers, like a treasured quilt or a valued pair of sneakers.  Trust me: if you’re able to sit through episodes like “Youth Takes Over” and “Sister Cities” you’ve performed above and beyond the call of television duty.  (“Youth” was penned by future Oscar-winning director James L. Brooks, who also created such TV classics as Mary Tyler Moore and Taxi…proving that an artist does need the freedom to be bad in order to be good.)

But I also lobbied heavily for the show to be released on DVD; it’s the completest in me, seeing as we already had The Andy Griffith Show and Gomer Pyle, USMC on disc.  Warner Home Video made this wish happen in April, and the DVD release of R.F.D.’s first season looks sensational.  The set is advertised as “complete” and they’re not kidding: the episodes are re-mastered and uncut (many of the episodes I wrote about on the blog were syndicated copies, recorded during the program’s stint on TV Land) and the presentation is quite spiffy.  Viewers unfamiliar with the show will enjoy some of the outings almost as I did; the episode “Howard’s Hobby” is a particular favorite, in which county clerk Sprague decides he needs to share his girlfriend’s interests in order for their relationship to strengthen.  (Howard learns to his dismay that his lady love is into the thrill-seeking pleasures of skydiving.)

Howard also figures in another funny R.F.D. entitled “The Panel Show”: he and Emmett are chosen by a Mayberry committee to represent the town on a television program that originates from New York.  Howard, dazzled by the Big Apple, embarrasses himself on the show by wearing a Nehru jacket, purchased to fit in with the locals.  Other stand-out episodes include “Driver Education” (Goober is asked to teach a high school course) and “The Church Play”; the latter episode suggests that the past of bakery gal Millie Swanson might be a little checkered in that she was at one time (gasp!) a chorus girl!

Mayberry R.F.D.’s curse and blessing is that its comedy never had any other ambition but to be inoffensive and inclusive; folks who are used to “edgier” sitcoms will be advised to walk away, while others who enjoy the simpler shows of another era (like Petticoat Junction) will welcome it like an old friend they haven’t crossed paths with in years.  Some might argue that I am an easy audience for this sort of thing…but I maintain that when I watched the series’ entire run there was always a laugh-out moment in every episode.  That’s more than I can say for some of today’s television comedies.