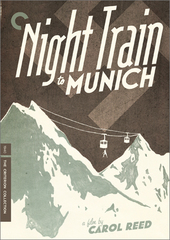 Where's That Been? - Night Train to Munich

It is mid-March in 1939, and Czechoslovakia is being invaded by German forces in the time leading up to the start of World War II. Inventor Axel Bomasch (James Harcourt), a scientist working on a revolutionary armor-plating process, is all too aware he needs to evacuate Prague before he falls into the clutches of the Nazis, and with the help of Allied support, secures a seat on a plane seconds before he can be captured. His daughter Anna (Margaret Lockwood) is not so lucky, however; she is rounded up by the Germans and sent to a concentration camp.

Inside the camp, Anna makes the acquaintance of Karl Marsen (Paul Henreid), a teacher purportedly imprisoned for his unpopular political views. The couple manage to escape and arrive safely in London, where Anna's search for her father begins. She receives a mysterious phone call ordering her to journey to the coastal village of Brightbourne; it is there she meets with song plugger Gus Bennett (Rex Harrison), who reunites Anna with Axel -- now in the employ of the Royal Navy at Dartford. Anna makes the mistake of writing to Karl and letting him know where she is, unaware that Marsen is in actuality a Gestapo agent who engineered their concentration camp escape in order to learn of Bomasch's whereabouts.

Anna and Axel are kidnapped by the Gestapo and taken back to Germany by U-boat -- there, she is told she will return to the camp unless her father agrees to collaborate with the Nazis. Her salvation will come in the form of Gus, who's really a British intelligence agent named Dickie Randall, and who'll adopt a third identity in Major Ulrich Herzog, a German Army engineer. 'Herzog' manages to infiltrate the German high command and, against all odds, plots to spirit the Bomasches back to England by any means necessary.

Based on the novel Report on a Fugitive by Gordon Wellesley, Night Train to Munich (1940; retitled simply Night Train for U.S. audiences) is the Rodney Dangerfield of British suspense thrillers: it gets little respect. Much of this is due to the fact that Night Train is eerily reminiscent of 1938's The Lady Vanishes; actress Margaret Lockwood stars as the 'damsel in distress' in both pictures, and the two movies were scripted by the writing team of Sidney Gilliat and Frank Launder. (The two films also set most of the action on trains, obviously.) Dismissed as an Alfred Hitchcock knock-off, Night Train is an entertaining rollercoaster ride of a film directed by Carol Reed, who was described in a New York Times review by critic Theodore Strauss as 'a brilliant newcomer' despite already having entries like The Stars Look Down (1939) on his cinematic C.V.

The comparisons to Hitchcock's Lady Vanishes are certainly fair game (film historian William K. Everson once speculated the Master of Suspense would have been offered Night Train had Hitch not left to direct movies in America), but Train has an advantage over Lady: it was produced as World War II was underway, and as such is able to identify its villains in a far more fearless manner. Though to be honest, the movie has been criticized for its incongruent tongue-in-cheek humor placed against the background of the Nazi menace. It's a disparagement that's also been lodged against the likes of Contraband (1940) and To Be or Not to Be (1942), which chose to mock the Nazis with a soupcon of black comedy. In an essay written by Philip Kemp and included with the Criterion release of Night Train, Kemp argues that the frivolity is due to the tenor of the times, since the movie was released 'during the period known as the Phony War -- before France fell, the British Army narrowly escaped annihilation at Dunkirk, and the Luftwaffe began to rain bombs on British cities.'

The insouciance of Night Train can also be traced to the sensibilities of Gilliat and Launder, the screenwriting team often leavened the seriousness of their thrillers with a little humor (case in point: 1946's I See a Dark Stranger, an entertaining wartime suspenser with Deborah Kerr). In an amusing scene in Night Train, a low-level bureaucrat named Schwab (Eliot Makeham) receives a dressing-down from his superior, Kampenfeldt (Raymond Huntley) -- Schwab has been overheard making disparaging remarks about the Fatherland ('This is a fine country to live in!') and is threatened with deportation to a concentration camp. Schwab shrewdly convinces Kampenfeldt that he was misunderstood by changing the emphasis of the phrase ('This is a FINE country to live in!'), and once Schwab is dismissed, Kampenfeldt himself repeats the phrase several times (with different emphases) before remarking to himself 'This is a BLOODY AWFUL country to live in!'

Reinforcing the comic relief in Night Train is an appearance from the two men who effortlessly stole scenes in The Lady Vanishes: the cricket-mad Charters (Basil Radford) and Caldicott (Naunton Wayne). The two chums turn up about fifty minutes into the movie, on holiday in Germany and distressed that they can't purchase a copy of Punch at a newsstand. It is Charters and Caldicott who set in motion the events that send Night Train breathlessly toward its exciting climax; Caldicott recognizes Randall (still in his guise as Major Herzog) as a chum from Oxford and innocently asks him if he's one and the same. Dickie manages to stammer out a denial, but his response makes Marsen suspicious -- and the Gestapo agent starts to make inquiries as to Herzog's real identity.

Yet the pair are also able to come to Randall's aid when they inadvertently overhear Marsen talking via a telephone extension about 'Herzog,' and they're able to not only give Dickie a heads-up that Karl is on to him, but they assist him in insuring the Bomasches' flight from Germany (the five of them reach the German-Swiss border, and effect an escape by cable car). The characterization of the duo is a positive delight; sure, they may be upper class twits but they're also patriotic where Queen and Country are concerned, and are ready to lend a hand when their 'backs are to the wall.' Radford and Wayne reprised their beloved personages in the 1941 mystery Crook's Tour (included as an extra on the Criterion release of The Lady Vanishes), and appeared as Charters and Caldicott one final time in the wartime propaganda film Millions Like Us (1943), also written by Gilliat and Launder.

Night Train to Munich gave Rex Harrison the opportunity to play his first male lead in a motion picture; the role of Randall/Bennett/Herzog is perfect for Harrison's onscreen persona, and if it seems his chemistry is somewhat lacking with co-star Margaret Lockwood it might be because Rex was busy off-screen in an affair with actress Lilli Palmer, who would later become Mrs. Harrison. (Gilliat and Launder wanted Michael Redgrave to play opposite Lockwood as he did in Lady Vanishes, but he was busy elsewhere.) Night Train is also an interesting vehicle for Paul Henreid (billed as von Henreid); he's a Nazi in this film, but would later switch sides in such classics as Joan of Paris (1942) and, of course, Casablanca (1942).