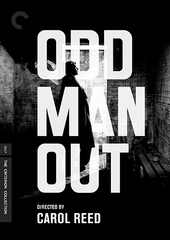 Where's That Been? - Odd Man Out

The opening titles of Odd Man Out (1947) state: 'This story is told against a background of political unrest in a city of Northern Ireland. It is not concerned with the struggle between the law and an illegal organisation, but only with the conflict in the hearts of the people when they become unexpectedly involved.' But let's be frank about this. That unnamed Northern Island city is clearly meant to be Belfast, and the 'illegal organization' the Irish Republican Army. The story involves Johnny McQueen (James Mason), an escaped convict who's been planning a heist on a local mill to generate funds for the cause. His fellow organization members, however, display a bit of apprehension over Johnny's insistence in participating on the raid; McQueen has been hiding out in a safe house owned by Kathleen Sullivan (Kathleen Ryan) and her gran (Kitty Kirwan) for six months since his breakout, and the other fellows have noticed a change in his demeanor.

The mill robbery, as feared, does not go off without a hitch. As the men make their getaway, Johnny is confronted by an armed cashier, who wounds McQueen in the left arm and is killed by Johnny's return fire. Johnny's confederates -- Nolan (Dan O'Herlihy) and Murphy (Roy Irving) -- attempt to pull him into the car as driver Pat (Cyril Cusack) speeds away, but an unconscious Johnny falls out onto a side street. As the three men squabble over whether or not to save their leader, Johnny comes to and continues off down the street, disoriented and in need of medical help. So begins a sort of spiritual journey for the anti-hero, as he comes into contact with several individuals who offer both help and hindrance as he attempts to make his way back to his safe house.

Filmmaker Sir Carol Reed won an Academy Award for his direction on Oliver! (1968), but many of Reed's admirers would have preferred that he had copped a statuette for any one of the first-rate suspense thrillers he helmed in the 1940s and 1950s. Reed's resume includes such classics as The Stars Look Down (1939), Night Train to Munich (1940), The Fallen Idol (1948), and Outcast of the Islands (1951), with a vocal majority (myself included) praising 1949's The Third Man as his finest cinematic achievement. In fact, several individuals believe Odd Man Out to be superior to Third Man, notably acclaimed director Roman Polanski. 'I still consider it as one of the best movies I've ever seen and a film which made me want to pursue this career more than anything else,' Polanski revealed in a 2005 interview. 'To a certain extent I must say that I somehow perpetuate the ideas of that movie in what I do.'

Author F.L. Green's success with the novel Odd Man Out (the book's sales were enormously helped when it was published as a Penguin paperback) led director Reed to option it for a film adaptation in 1945. The director was somewhat jaundiced at what he felt was a lack of good screenwriters in British cinema at the time, and so he insisted Green -- a novice when it came to films -- write the adaptation himself. Reed also hired R.C. Sherriff to lend a hand, and in keeping with previous films tinkered a bit with the final result as well.

Reed offered the lead to Stewart Granger, who turned him down and no doubt regretted it years after the fact. James Mason jumped at the chance when he was asked; Mason had been making a name for himself with such films as Thunder Rock (1942) and The Seventh Veil (1945), and relished the opportunity to work with what he felt was one of the few truly worthwhile directors in British cinema at that time. Reed gave his leading man free reign to 'discover' his character, something actors regularly eat up with a spoon, and Odd Man Out remains one of the finest movie showcases of the actor who would later go on to greater triumphs like A Star is Born (1954) and North by Northwest (1959). (Mason wasn't shy about proclaiming his turn in Odd Man Out as the best of his career, and his favorite among Carol Reed's films.)

With the exception of Mason and Robert Newton -- who plays Lukey, the painter who obsessively wants to capture Johnny McQueen's haunted expression of death on his face -- most of the actors in the film were unknown to movie audiences, recognized more for their onstage triumphs as members of the Abbey Theatre in Dublin. That's future Best Actor Oscar nominee Dan O'Herlihy (for The Adventures of Robinson Crusoe) as one of the organization members, and both Denis O'Dea (as the sympathetic detective who's investigating McQueen's whereabouts) and Cyril Cusack (Pat the driver) are well-known character faces from classic films. The bartender at the Crown Bar in the film is William Hartnell, known to many a Doctor Who fan as the first incarnation of the famed TV hero. Britcom obsessives like myself will recognize Steptoe and Son's Wilfrid Brambell (he played Paul McCartney's 'clean' grandfather in A Hard Day's Night) as a tram passenger and the incomparable Dora Bryan can clearly be seen making a call from a phone booth.

Odd Man Out was the first collaboration between director Carol Reed and cinematographer Robert Krasker, who would later win the only Oscar given to Reed's impeccable The Third Man. The monochrome cinematography is unquestionably the star in Odd Man Out, creating a world of shadows that would not be out of place in a film noir photographed by John Alton. Krasker and Reed preside over a dreamlike, hallucinatory atmosphere that challenges the film's protagonist as to what is real and what isn't, and the final scene where Johnny meets his doom (accompanied by Kathleen, who loves him unconditionally) is painted almost like a dark picture postcard as snow falls down upon them. The ambiguity of the cinematography also comments on the fact there are no judgments made on the nature of McQueen and Company's activities: we encounter people who offer succor as well as folks who have no qualms about turning them over to the authorities.

There's an amorality to Odd Man Out tempered by a bit of religious homily, represented by kindly Father Tom (W.G. Fay), the priest that Kathleen asks for assistance when Johnny is still missing. That's one reason why I prefer The Third Man to Odd Man Out, even though I'm a solid fan of both films (plus Third Man has Orson Welles, I mean, come on). Don't be put off by the political overtones of this movie; Odd Man Out maintains its bona fides as a solid noir thriller, and if there are any James Mason detractors out there his performance will generate further reflection (it did for me, though it also took The Reckless Moment and Caught to do it).