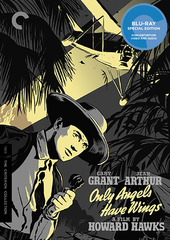 Cary Grant Soars in Only Angels Have Wings

A small, shoestring-run airline delivers mail through a treacherous pass in the Andes; the pilots are misfits looking to run and hide (from dames, mainly) or make a quick buck and go somewhere else. A Sig Rumann is the owner, Cary Grant is the manager, Thomas Mitchell is his best buddy, and John Carroll and Noah Beery, Jr. are amongst the pilots of this French Foreign Legion of the Air. They're all stoic and fatalistic because it's a dangerous job with a lot of crackups, but they also make full use of black humor and graveyard-passing-whistling to get through it all.

And then things have to go and get all dramatic.

First, Jean Arthur shows up; she's a traveling entertainer on a layover for a day, and the pilots are all frantically wooing her but, let's think about this for a second: imagine you're a woman (or, perhaps, you actually ARE one). Now, you're being wooed by Noah Beery, Jr. while Cary Grant is standing right over there...Right, that's going to cause some anguish on the part of Noah.

Then arrives, of all people, Richard Barthelmess and his wife Rita Hayworth; Richard once bailed out of a plane and left his co-pilot, Thomas Mitchell's brother, to die, so he's EXTREMELY unpopular but the airline needs pilots and can't be too choosy. And not only THAT, but Rita used to mess around with Cary and there are still some sparks, sparks REALLY obvious to Miss Arthur.

I told you it gets all dramatic.

Only Angels Have Wings is a terrific Howard Hawks movie that starts okay, gets good, and then gets VERY good before finally getting GREAT. It's exciting, suspenseful, romantic, dramatic...If there's a drawback, it's the claustrophobic sets (that dock where the ship lands, I swear, is smaller than anything in a Monogram picture) but the flying sequences are some of the best I've seen, and I don't mean in the 1930s, I mean EVER, in movies.

'Jeff, you don't have to be afraid of me anymore. I'm not trying to tie you down. I don't wanna plan, I don't wanna look ahead, I don't want you to change anything. I love you, Jeff. There's nothing I can do about it. I just love you, that's all.' - Jean to Cary Grant

Of course, Miss Arthur was at her best playing wry in romantic comedies, but she's got dramatic chops, too and that quality that makes it difficult to take one's eyes off her for a second when she's onscreen; this is one of her best roles and best performances. She looks good, plays piano, lights Cary Grant's ciggies for him (a LOT), and for somebody who was reportedly terrified to be in front of a camera, she never, ever holds anything back. (Of course, as with most of her directors, she pushed back hard, and Hawks was extremely frustrated by her.)

Grant is really good here; one doesn't see him TOO often playing as part of an ensemble of men and fitting in as well as he does here. Mitchell of course is terrific; was he ever not? Hayworth is bodaciously lovely in her breakthrough role, and Barthelmess gives an Oscar-worthy performance as the haunted pilot trying for a comeback.

Speaking of comebacks, Hawks' recent career had been problematic; he was fired by Sam Goldwyn from Come and Get It (1936) for changing the Edna Ferber novel too extensively during its adaptation to the screen, and the RKO romantic comedy he directed next was not a hit, either (you may have heard the title, though: a little something called Bringing Up Baby). He fell back on the aviator stories he heard and saw when he was a pilot during the Great War to fashion this picture, which was a colossal hit and led to a decade of nothing but critical and box-office smashes for the director, including His Girl Friday, Sergeant York, Ball of Fire, Air Force, To Have and Have Not, The Big Sleep, and Red River.

As for Miss Arthur, well, she's nothing less than our all-time favorite actress, but as she approached age 40 (looking ten years younger), she was tired of the Hollywood grind. Her next film, Mr. Smith Goes to Washington, was another masterpiece, and she had classics left in her, The Devil and Miss Jones, The Talk of the Town, and perhaps her funniest film, The More the Merrier, for which she received her only Oscar nomination. She retired when her Columbia contract expired in 1944, lured back before the camera only two more times, including her final film, the atypical Shane.

As for Cary Grant, he did okay, too.

The Blu-ray of Only Angels Have Wings from the Turner Vault program is astounding, giving the film a beauty and depth it hasn't had since 1939. As usual, the TCM bonus material includes mostly print accruements, posters and text.

Only Angels Have Wings, the Blu-ray edition, is a true keeper and a film classic.