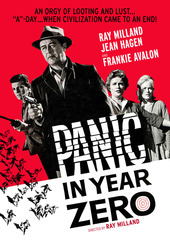 Don't Be Afraid of the Panic in Year Zero

Released mere months before the Cuban Missile Crisis, Panic in Year Zero! is a compelling Cold War drama with a fascinating blend of elements, combining disturbing adult-oriented themes with some of the more juvenile-focused hallmarks of its studio, American International Pictures (AIP). Kino Lorber's video release is an excellent presentation of a fine film that takes us through some grim moments in a post-atomic landscape but ultimately ends on a note of optimism...or does it?

AIP is noted for exploitation and drive-in movies geared towards teenagers, often with generous helpings of violence and/or risque material. You wouldn't necessarily expect a sober commentary on the breakdown of social mores in the wake of a disaster, and, well, that's not exactly what Panic is. However, AIP goes a bit beyond the casting of Frankie Avalon, the violence, and all of the more sensationalist aspects of the story. Stars Ray Milland (who also directs) and Jean Hagen bring some gravitas to the tale of a family preparing for the possible end of civilization after the U.S. is hit by multiple atomic attacks.

Milland's Harry Baldwin, his wife Ann (Hagen), and their two teenage children Rick and Karen (Avalon and Mary Mitchell), are on their merry way to a camping vacation when they see intense flashes in the sky. Looking back toward Los Angeles, they see huge mushroom clouds towering over the city. Harry quickly morphs from holiday mode to survival mode, and as the family tries to find a space to hole up and wait for civilization to be restored after its inevitable deterioration, Harry steps more and more outside the rules of society as he looks out for his own.

It's interesting that, at first, the family heads to Los Angeles even after seeing what's happening. There is an attempt to provide a semi-reasonable excuse for this -- Ann's mother is in the area -- but it's a bit ridiculous to see the family speeding towards a possible nuclear holocaust, not to mention chatter about how tough traffic will be entering the region despite the clear line of traffic fleeing it. Still, give Harry credit: When he switches to 'OK, we're getting the heck out of here and here's what we're going to do,' he is 100% committed.

Harry Baldwin lays everything out, describing what is going to happen as survivors panic. Sure enough, after the family turns around and hits the road away from disaster, they encounter food shortages, price gouging, armed robbery, and other indiscretions both petty and severe as their fellow Americans get desperate. Through it all Harry remains calm but urgent, seemingly working out the details of his plan on the spot even as he is forced to adapt to changing realities.

In a key scene, Harry and Rick fill up their RV with enough spare gasoline to last them a good while but are then stunned to learn the proprietor of the station has jacked up the price on the spot after seeing what's unfolding. Harry decks the guy but retains his own principles by leaving the original amount in cash where he can get it when he regains consciousness. Similarly, Harry gives Rick a gun several times, expecting him to use it when needed, but he also admonishes Rick to never enjoy it.

Later, after the Baldwins find a spacious cave in a secluded location and set up their new, hopefully temporary, domicile, Harry prefaces their first meal with a speech about maintaining some degree of normalcy, mentioning that he and Rick will continue to shave, for example, and even lightening the tension with a crack about Rick needing to do it less often. The Baldwins find themselves in jeopardy at multiple points on their journey, even after they find shelter, but Harry is usually a step or two ahead of the game, and when he's not, he doesn't shy away from bending the rules to protect the group. He's resolute and practical, but he never loses his sense of humanity, feeling some pangs of regret even when terrible circumstances force him to extreme measures.

Milland the actor is a boon to Milland the director. His commanding presence makes him a formidable leader, but he is tender enough to be a likable patriarch in the movie's quieter moments. He makes a believable family man who is also a strong hero for the audience's rooting interest. The rest of the cast holds its own in what is clearly Milland's picture. Avalon's casting was a marketing move to grab the youth audience, but he acquits himself well enough to make that irrelevant. Hagen has one of the more challenging tasks, playing a character with little dimension beyond 'mother/wife,' also bearing the thankless task of being the one in the family who keeps raising objections to Harry's ideas even when he is proven right time and again. Hagen remains effective despite her role's limitations, as does Mary Mitchell as teenage Karen. She has little interesting to do until something dramatic happens to her late in the action -- something that shakes up the Baldwins' 'new reality,' reminding us of the stakes of social breakdown.

If Panic in the Year Zero has a flaw, it's the often overbearing and sometimes inappropriate musical score for the on-screen tableau. The jazzy music feels more suited for a more blatantly youth-centered AIP 'hot rod' picture. Also, the movie is more exciting when the Baldwins are on the road than when they hunker down in survivalist mode. These are minor quibbles, though, with little impact on a consistently compelling movie with a host of memorable scenes.

Panic arguably ends on a positive note by focusing on the future and the evidence that society can rebuild itself after 'Year Zero' (a term declared on a radio bulletin the Baldwins hear after the attacks). However, the chilling dramatization of the sudden deterioration of law and social mores in this narrative offers a pointed commentary on the reactions of citizens in times of crisis. Sure, this level of thought is tucked into a low-budget thriller with fistfights, thugs, and guns, but it's there, and it makes the film more than a cheapo exploitation rush job.

Kino enhances this entertaining film with several appealing bonus features. Veteran filmmaker Joe Dante shares his take on the film (and agrees about the music) in the engaging featurette 'Atomic Shock!' Richard Harland Smith's feature-length audio commentary is another big plus. Smith not only provides relevant production details, but he places Panic in full context, discussing contemporary world events as well as Cold War and apocalyptic fiction in various media. His delivery and pacing are both relaxed and assured, creating a fun listening experience for anyone who wants to learn more about the film. Kino rounds out the supplements with a selection of trailers for Panic and other Milland/AIP movies.

Speaking of trailers, I think more studios should include them on their DVD releases, both because it's the right thing to do and because seeing the often unrestored, weathered-looking preview clips makes the main feature look better by comparison. However, the audio/video quality of the movie impresses in its own right on this disc; Gilbert Warrenton's black-and-white cinematography looks great. The action taking place at night is particularly sharp, including a standout scene in which Milland must use fire as a tool to cross a busy, dangerous highway. Panic is low budget but well shot, and it's great seeing this release do it justice.

All told, this is an excellent presentation of an underrated piece of early 1960s pop culture. The film provides consistent entertainment, genuine thrills, and provocative ideas. Panic in Year Zero! is essential for fans of Cold War cinema, American International, and Ray Milland; and it's well worth a look from all vintage film lovers.