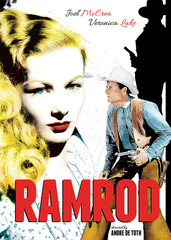 Where's That Been? - Ramrod

Rancher Walt Shipley (Ian McDonald) is making plans to raise sheep on his modest spread...but he's running into interference from two wealthy cattle ranch owners, Ben Dickason (Charlie Ruggles) and Frank Ivey (Preston Foster), who fear the additions to Shipley's Circle 66 will devour the grass they need for their own herds. Ivey, a ruthless and ambitious man who, despite the presence of a sheriff (Donald Crisp) in town, pretty much calls the shots, warns Shipley that if he attempts to get on a stagecoach that evening (for the purposes of picking up his sheep) it'll be the last breath he'll ever take. Ivey has made a similar threat to one of Shipley's ranch hands, Dave Nash (Joel McCrea), who's been working for Walt ever since Sheriff Jim Crew got him the job.

Shipley scuttles his stagecoach plans...but does beat a hasty retreat out of town later in the night, much to the chagrin of his fiancee, Connie Dickason (Veronica Lake). Connie is Ben's daughter --- his ambition is for her to wed Frank Ivey, but she'll have none of that nonsense -- and though she's disgusted by Walt's turning-tail-and-running, she does benefit from Shipley's flight in that he leaves the Circle 66 to her. Connie asks Dave to sign on as the Circle 66's foreman (the ramrod of the film's title)...and though Dave is initially reluctant to do so, he acquiesces after a run-in with Red Cates (Lloyd Bridges), one of Ivey's henchmen. Connie is determined -- by any means necessary -- to make a go of ranching; she tells her father 'being a woman, I won't need to use guns.'

A dark, complex oater directed by Andre de Toth, Ramrod (1947) is a successful example of the melding of the Western movie genre with the film style known as noir. At first glance, the two seem incompatible: westerns concentrate on the wide-open spaces of the great outdoors and the optimism of rugged individualism...while noir focuses on the claustrophobia of urban cities and the pessimism of paranoiac helplessness. In a nutshell, it's moral clarity vs. moral ambiguity. But elements of noir can be seen in classic sagebrush sagas as early as The Ox-Bow Incident (1943) and My Darling Clementine (1946)...and really began to pick up steam in 1947, with the releases of Ramrod, Duel in the Sun and Pursued.

Ramrod had at its helm a director who was no stranger to the noir style: De Toth oversaw such classics as Pitfall (1948) and Crime Wave (1954), and would revisit the 'noir western' again in Day of the Outlaw (1959). In Ramrod, the rocky cliffs are perfect substitutes for the vertiginous skyscrapers of the city; the cinematography (courtesy of Russell Harlan) of the night scenes is every bit as dark. Author Luke Short wrote Ramrod's original story (adapted by Jack Moffitt, C. Graham Baker and Cecile Kramer), and his novels Station West and Blood on the Moon were later adapted for the silver screen as well (both in 1948).

Ramrod also features a serious femme fatale in Veronica Lake as the duplicitous Connie Dickason -- a fascinating character in that, while she's ostensibly fighting for a good cause (the takedown of the bullying Ivey), her methods are far from admirable: she's a selfish, unscrupulous woman, obsessed with vengeance. Connie uses her feminine wiles to convince ranch hand Bill Schell (Don DeFore) to stampede her own cattle, knowing the blame for the deed will be placed on her nemesis Ivey. Her jealous obsession with Dave Nash (she's carrying a major torch for the guy) makes her responsible for the death of Schell, and jeopardizes Nash's life as well. While Lake was inarguably a spellbinding presence in classic movies, Ronnie herself wasn't a particularly good actress -- but her lack of depth is a good fit for the character of Connie, whose shallowness is concealed by her mesmerizing beauty.

Though the nominal hero of Ramrod, Joel McCrea's Dave Nash is a flawed human being influenced by the moral failings of the company he keeps. A recovering alcoholic, Nash tries to adhere to a moral code in which he allows the law to right the wrongs instituted by Ivey's ham-handed tactics. But the sheriff of the town is ineffectual at best, and when Frank kills Crewe in cold blood, Dave goes off to mete out his own justice -- convinced that the individual responsible is one of Ivey's henchies, a man named Virg Lea (Wally Cassell). Dave ambushes Virg at his campsite and kills him...only to hear in the man's dying breath that it was Frank Ivey who croaked Crewe. From 1946's The Virginian until his retirement from films, Joel McCrea appeared in virtually nothing but westerns (the lone exception being 1953's Shoot First)...it was a genre with which he was most comfortable, and he did outstanding work in such features as Colorado Territory (1949), Stars in My Crown (1950) and Stranger on Horseback (1955).

One of the major strengths of Ramrod is the movie's sterling supporting cast: Charlie Ruggles, fondly remembered as bumbling comic relief in a plethora of 1930s films (Ruggles of Red Gap, Bringing Up Baby), is excellent in a straight role as the cold, distant Ben Dickason...and Preston Foster creates one of the most memorable villains in Western history as the cold-blooded and determined Frank Ivey. (Ivey, despite his bad guy-ness, actually is entitled to a little sympathy -- after all, his major villainy is a response to charges of a crime he didn't technically commit.) Most impressive of all is character veteran Don DeFore as Bill Schell, a rakish drifter (with an eye for feminine pulchritude) who's extremely loyal to Dave. DeFore's Schell goads one of Ivey's goons, Ed Burma (Ray Teal), into a gunfight and claims the killing was self-defense; impressed with Schell's willingness to take on Ivey, Connie coyly manipulates Bill into stampeding her own herd. Schell later regrets this action, and in a conversation with Connie reveals his true feelings toward her: 'You're like a horse, or a dog, or a man or any other woman...once I understand you, you're all right.' (DeFore is probably more familiar to classic movie fans as the affable George Baxter, employer of the meddlesome maid known as Hazel.) The movie features additionally fine performances from Donald Crisp, Arleen Whelan (as the dressmaker who winds up with McCrea at the end), Nestor Paiva, Lloyd Bridges and Jeff Corey.

Ramrod was the first film produced by Enterprise Studios (who would later churn out two John Garfield classics, Body and Soul and Force of Evil), and Veronica Lake's first foray away from her established home at Paramount (I certainly don't want to accuse anyone of nepotism...but she was married to Ramrod's director at the time). Although Lake and co-star Joel McCrea made a wonderful team in Sullivan's Travels (1941), the seams clearly start to show in Ramrod -- it would be their last film together. 'Life's too short for two films with Veronica Lake,' the actor was later quoted as saying. Her scraps with her leading men are legend...but in Ramrod, it works to her advantage; she plays an uncompromising woman who'll stop at nothing to get what she wants -- and learns, to her regret, that all she has is nothing.