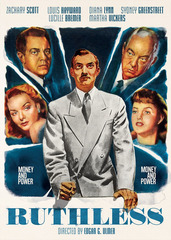 Where's That Been? - Ruthless

Tycoon Horace Woodruff Vendig (Zachary Scott) hosts a sumptuous dinner party at his formidable estate -- one to which his former business partner Vic Lambdin (Louis Hayward) has been invited, and one that Vic accompanies with pianist Mallory Flagg (Diana Lynn) at his side. At this affair, Vendig announces to all in attendance that he will donate a generous portion of his fortune (twenty-five million dollars) and estate to establish a peace foundation in his name. (What a guy!)

Relations between 'Woody' and Vin are a bit frosty even though the two of them have been friends since childhood. But a thaw gets underway when Horace meets Mallory; Ms. Flagg is a dead ringer for a woman named Martha Burnside (also Lynn) who was Vendig's fiancee until he abandoned her to pursue his business ambitions. The story of how all this happened -- as well as Horace and Vin's estrangement, not to mention the details of how Vendig was able to bring down a rival industrialist in Buck Mansfield (Sydney Greenstreet) -- is told in a series of flashbacks on the eve of Horace's preparations for a long voyage on his yacht.

Ruthless, a 1948 release from Eagle-Lion -- 'the little studio that could' -- has often been described by more than a few classic film buffs (myself included) as 'the poor man's Citizen Kane.' There are a number of similarities between Ruthless and the movie some consider the greatest of all time: both of its protagonists have three names (Horace Woodrow Vendig vs. Charles Foster Kane), and both films tell the story of big business moguls who are driven by ambition to own as many things as they can, long after they've even remembered why they wanted to acquire all those possessions in the first place. The theme of how money corrupts an individual is also at play in both features; Ruthless kicks off the proceedings with the familiar Biblical quotation (Mark 8:36): 'For what shall it profit a man, if he shall gain the whole world, and lose his own soul?'

One noticeable deficit in Ruthless when comparing it to Kane is it doesn't convincingly explain the damage Vendig's uncomfortably awkward childhood plays in the making of its protagonist. Kate Vendig (Joyce Arling), who makes a living as a piano teacher, is inconsolably bitter that she no longer enjoys the lofty social status she previously entertained, and her son (played as a youth by Robert Anderson) suffers for this by receiving little love or support. Pete Vendig (Raymond Burr), Horace's father, won't be winning any 'Father of the Year' honors either; he's a con man and wastrel barely making ends meet running a fish eatery.

Horace seeks solace by allowing himself to be adopted by the Burnsides (Dennis Hoey, Edith Barrett), who are eager to express their gratitude for Horace's quick-thinking in a canoe accident that put Martha's life in peril. Mr. Burnside even generously funds Horace's education at Harvard (despite being a man of modest means). So the point of the story when Horace abandons Martha and turns his back on the generosity of his foster parents is a bit muddied: we lose sympathy for Vendig at this juncture because he comes across as little more than a stinker.

In the role of the opportunist who eventually meets his downfall in Ruthless is Zachary Scott, an actor best known as the rotter who comes between Joan Crawford and daughter Ann Blythe in the 1945 classic Mildred Pierce. Since I've already described Ruthless as 'the poor man's Citizen Kane,' I'll continue in the same manner by labeling Zachary 'the poor man's George Sanders.' Scott reveled in his onscreen caddishness, but to his credit he was frequently able to expand his cinematic range beyond playing villains. For every sinister role (The Mask of Dimitrios, Danger Signal) there was a good guy portrayal (The Southerner, Shadow on the Wall), and sometimes he even blended the two, like his interesting depiction of weakling Fielding Carlisle in Flamingo Road (1949).

Scott's performance is buttressed by equally strong turns from Ruthless' supporting cast, featuring Louis Hayward, Diana Lynn, Martha Vickers, and Lucille Bremer. I'll freely admit a little bias here, but I think Sydney Greenstreet is the standout -- when we first see him onscreen he's a broken man, with that same sick look on his face he sported when he discovered the statue in The Maltese Falcon (1941) was a fake.

The flashbacks reveal Greenstreet's Buck Mansfield is a formidable adversary for Woody Vendig, and when Horace finally triumphs he's lauded in the newspapers as a positive genius. The gentlemen of the fourth estate are unaware, however, that the person responsible for pulling Mansfield off his perch is his duplicitous wife Christa (Bremer), who then marries Vendig shortly after, until he rids himself of her once she's outlived her usefulness. (Mansfield gets his revenge on Vendig in Ruthless' entertaining climax, by the way.)

French film critics once described Ruthless' director Edgar G. Ulmer as un cineaste maudit, loosely translated as 'accursed director.' Ulmer's reputation today is that of a Poverty Row magician (he made a slew of features for B-picture studio PRC, aka Producers Releasing Corporation) who, in the words of film historian Gregory W. Mank: 'He had to take a rat and make Thanksgiving dinner out of it.'

Ruthless might possibly be the highest-budgeted film Ulmer worked on outside of The Black Cat (1934) -- filmed at Universal, which blackballed him not long afterward as a result of an assignation he had with the wife of studio head Carl Laemmle's nephew. It's a sumptuous-looking production, and a far cry from Ulmer's PRC efforts like Bluebeard (1944) and Detour (1945) -- the movie for which the director is perhaps best-known.

At the time of Ruthless' release, the authorship of the movie (based on Dayton Stoddart's novel Prelude to Night) was solely credited to S.K. Lauren and Gordon Kahn. But much of the film was actually written by Alvah Bessie, soon to be branded as one of 'the Hollywood Ten.' It's a modest little movie that manages to entertain the viewer regardless of whether or not 'you've seen it all before.'