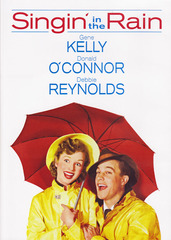 Teen Scene - Singin' in the Rain

This month, I'll explore the world of the musical, a movie genre too often underestimated by the people of the Y generation. Singin' in the Rain is the kind of movie that even people who normally don't like musicals can enjoy! There's something magical about this film and it's through the combination of its many positive points.

Singin' in the Rain is a glorious tribute to the beginning of talking pictures. It starts in 1927 with the premiere of The Royal Rascal, a silent picture produced by Monumental Pictures, starring the two big Hollywood stars of the day, Don Lockwood (Kelly) and Lina Lamont (Jean Hagen). On his way to the after party, Don is attacked by a bunch of fans and manages to run away. He jumps in the car of a young lady, Kathy Selden (Debbie Reynolds), who snubs his movie-acting career claiming that theatre is better and that she is a stage actress herself. At the party, Kathy pops out of a giant cake, revealing that she is in fact just a dancer.

The same evening, a talking picture is shown to the guests at the party. This is something completely knew and the people don't believe in it. But The Jazz Singer, the first talking picture, is a big hit. Don Lockwood and Lina Lamont's next film, The Duelling Cavalier, is meant to be a silent picture, but due to the competition created by The Jazz Singer, producer R.F. Simpson decides to turn it into a talkie. The result is a catastrophe, mainly due to Lina Lamont's aggressive tone of voice. After the premiere, Don, Kathy and Don's musician friend Cosmo (Donald O'Connor) find the solution: turn it into a musical! Cosmo also has the idea to use Kathy's beautiful voice instead of Lina's.

Singin' in the Rain is best known for its title musical number. Gene Kelly sings about the 'glorious feeling' under a torrential rain. But Singin' in the Rain contains a bunch of other colorful musical numbers such as 'Moses Supposes,' 'Good Morning' and 'The Broadway Melody Ballet.' The musical numbers are a spectacle for our eyes and ears, creating a contagious joy that makes us want to tap dance! The songs weren't actually originally composed for the film. The majority were picked from previous movies produced by MGM. For example, 'Singin' in the Rain' song can originally be heard in The Hollywood Revue of 1929. 'Good Morning' was first sung by Judy Garland and Mickey Rooney in Babes in Arms. The original versions of 'Moses Suppose' and 'Make 'Em Laugh' also appeared in other films, although 'Make 'Em Laugh' is known for having a close resemblance to Cole Porter's 'Be a Clown' from the musical The Pirate (also starring Gene Kelly). Original or not, the songs are a delight, the musical arrangements are perfect and it's a rich variety of music and lyrics.

To this is added the incredible tap dance numbers by Gene Kelly, Donald O'Connor and Debbie Reynolds. One of the most impressive tap dance moments is 'Moses Supposes' with Kelly and O'Connor. And how can we forget Cyd Charisse's dancing cameo? Well known for her long legs, Charisse creates an unforgettable visual spectacle opposite Kelly. One of the best moments of the 'Broadway Melody Ballet' is her poetic and angelic dancing as a long white veil trails behind her.

Apart from its unforgettable musical numbers, Singin' in the Rain is best remembered for the strong variety of its characters. Gene Kelly couldn't be more credible as Don Lockwood. He has the look, the charisma, the voice, and the perfect feet for such a role! Debbie Reynolds is adorable and charming as Kathy, a young girl who makes us think of a doll. Her smile is infectious. Donald O'Connor is a favorite as the sympathetic Cosmo Brown. Cosmo is the kind of person you want to be friends with. He is hilarious and the film wouldn't be the same without him. Jean Hagen deserved her Oscar nomination because she is perfect as Lina Lamont. How can we forget that voice! And those words! Willard Mitchell has the perfect shape and attitude to play a film producer and Douglas Fowley is a wonderful discovery as the movie director. The poor guy is always on edge!

Singin' in the Rain remains a fantastic picture for the evolution of its story. It shows us the musical in a perfectly entertaining and original way. However, that's not exactly how it happened in real life, but it remains a rather sympathetic and amusing way to present it. The screenplay by Betty Comden and Adolph Green contains a variety of memorable quotes which make the film one of the funniest movies of the 20th-century. There are too many to recount them now would fill the whole review! The best solution is to watch the movie!

Singin' in the Rain has to be praised for the magnificent costumes created by Walter Plunkett (best remembered for his creations on Gone With the Wind). They seem perfectly suited to the fashion of the late '20s and add pep to the film's visual dimensions.

Singin' in the Rain is a Technicolor marvel that's utterly timeless. It is, with no doubt, a classic appreciated by all generations. This feel good movie will make you want to watch more musicals and do a time travel to the golden days of classic Hollywood!